#RhodesMustFall: Lessons to be drawn 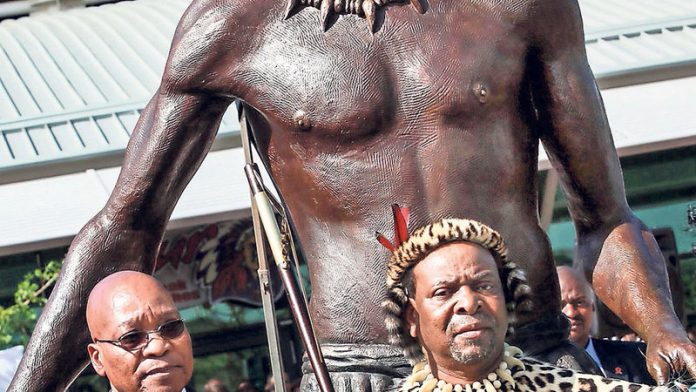 The #RhodesMustFall debate raises the issue of iconic historical figures in a multicultural democracy guided by a Bill of Rights. In 2010, a statue of King Shaka standing among cattle, his shield and spear leaning against a stone, was unveiled at the King Shaka International Airport. The statue was removed shortly afterwards at the request of the Zulu royal family and its replacement is to be unveiled soon. Yet, however the new statue depicts Shaka, the same issues arise.

Shaka and Rhodes are different in many ways, but similar in some. Do they share a common humanity?

The oral history of Shaka is complex and conflicted: the main sources drawn on here are the epic poem,   Emperor Shaka the Great, by Mazisi Kunene, and Dan Wylie’s magisterial Myth of Iron.

Both Shaka and Rhodes had legendary energy and became cult heroes. Both died extremely wealthy, without heirs and single, and left controversial legacies: a regional kingdom based on military conquest and alliances in the case of Shaka, and companies, discriminatory laws, a migrant labour system and philanthropic bequests in the case of Rhodes.

Both were outsiders. Shaka was conceived out of wedlock and he and his forceful mother, Nandi, were exiled from the small Zulu clan where his father was the inkosi (chief). He was adopted by a neighbouring clan and returned to take the leadership of the Zulu clan by force, punishing those who had banished him and his mother.

Rhodes was an asthmatic child with a lifelong heart condition. He was taken out of school and sent to South Africa to improve his health. He worked on a cotton farm, had spells at Oxford, did not fit in and remained ill at ease with the British ruling class. He had a Kipling-like admiration for down-to-earth immigrants in the colonies, and funded Charles Parnell, the militant leader of Irish resistance to British rule.

Both Shaka and Rhodes were colonists. Shaka conquered and integrated neighbouring clans, and invaded the AmaMpondo and AmaNgwane. Rhodes supported the British war against the Boer republics, and organised the annexure of what became Rhodesia in his efforts to establish a Cape-to-Cairo railway and British rule in Africa.

Both dragooned large numbers of men into serving their vision: Shaka through compulsory and extended military service, Rhodes by means of the “hut” tax that forced rural dwellers into the mines to earn cash as migrant workers.

‘Warrior leader’
Rhodes believed in the superiority of Anglo-Saxons. Was Shaka racist? He was not in significant contact with more than a few Europeans. Was he a clan-based nationalist?

Kunene’s praise poem exults in Shaka’s triumphant conquest of many clans and the “devouring” of their cattle. The poem also extols his belligerent personality: uDlu-ngwane (the raging, ferocious one); Ilemb’ eleq’ amany’ amalembe ngokukhalipha (the axe that’s sharper than other axes); UGaqa libomvu nasekuphateni (the long spear that’s red even along the handle).

The images resemble those in other  izibongo (praise poems), and are found in the oral poetry of other cultures, such as the epic poems in Greek, Latin and Anglo-Saxon. Common to these is a warrior-leader, battling enemies in heroic hand-to-hand fighting.

Contemporary historians have worked hard to dispel the colonial stereotypes: of Rhodes as the vigorous empire builder, bringing civilisation to Africa; of Shaka as the bloodthirsty tyrant who ruled by the spear. As populations increased in the early 19th century in what is now KwaZulu-Natal, and as increasing trade, including slaving, brought clans into fractious contact, fluid alliances between clans took place, interrupted by conflict.

Shaka forcibly consolidated Zulu hegemony and, through strategic treaties with other clans, brought relative stability to the region. The cost was the deaths of combatants in expanding and defending his kingdom, and the flight of refugees to the north and south.

Shaka placed izinduna (headmen) in the clans he conquered, who supervised the tributary payments of grain, cattle and girls to the Zulu royal house. This was a form of indirect rule, as practised by Roman, Moorish and British imperialists, to name but a few. It is eerily similar to President Jacob Zuma’s patronage system of governance.

Criticism of Rhodes
Rhodes, in contrast, forcibly consolidated industrial development in Southern Africa, raising fixed capital investments from overseas investors, such as the Rothschilds. He alienated indigenous inhabitants from the ownership of land and mineral resources, and forged monopolistic diamond, gold and fruit-exporting corporations that developed a global reach.

As prime minister of the Cape, he pushed through the infamous land-grabbing Glen Grey Act, and was forced to resign when his role in the abortive Jameson Raid was exposed. Historians hold him more than partially responsible for the invasion of 455 000 British troops that followed, sent to crush the Boer republics and secure the gold and diamonds industries for the empire.

The Anglophone admiration of Rhodes as the empire builder was reinforced by the news of his philanthropy after he died: he gave all his wealth to educational causes.

He was not by any means universally admired: his obituary in the Guardian newspaper (27 March 1902) was extremely negative, as was the 1996 BBC TV series about him. The Rhodes cult had faded by the end of the past century, until in 2015 the #RhodesMustFall movement revived interest in him as a latter-day symbol of mercantile and militaristic British imperialism.

Shaka-style nationalism
The ethnic nationalism associated with Shaka and the expanded Zulu clan outlasted the half-brothers who had him assassinated in 1828. It was sustained by his followers, and by the Bantustan policies of the apartheid regime.

Shaka-style Zulu nationalism surfaced in the run-up to the first democratic elections when spear-brandishing Inkatha Freedom Party militants, supported by South African security forces, frequently attacked ANC members. It reappeared in xenophobic violence in 2015 after King Zwelithini called on Zulus to get rid of the foreigners in their midst. The ANC in Parliament and on the ground quelled the outburst, in effect rejecting the primacy of Shaka-style nationalism.

The Shaka myth continues to reach global audiences through pulp fiction novels, films and Shaka Zulu, a lurid, gory and historically inaccurate TV series. The bare-chested, macho-warrior myth is kept alive in a commodified form to attract tourists to KwaZulu-Natal, and by prominent Zulu leaders at the annual commemoration in Dukuza.

The Constitution secures a place for hereditary leaders, with handsome grants to kingships such as the Zulu royal family. The 2015 Traditional Leaders and Khoi-San Bill, currently before Parliament, proposes an extension to their powers, which has drawn criticism from civil-society organisations, women’s groups and opposition parties.

To topple or not to topple? To be consistent with their actions at the University of Cape Town, should the #RhodesMustFall movement in South Africa not topple Shaka’s forthcoming statue? Isn’t it a symbol of values inconsistent with a hard-won Constitution, the Bill of Rights and the position of women in society today?

A statue can never adequately symbolise the personal limitations and the effect of the human being stuck on top of a plinth. The way out of the dilemma is to ensure that the statue becomes part of a site for public education.

Oriel College in Oxford decided to retain the statue of Rhodes, despite pressure from a group of students to take it down. It will, however, erect a plaque acknowledging both his bequest to the college and the present college’s repudiation of his colonial mores and modus operandi.

The college was planning to organise an extended period of “structured listening”, to discuss such issues as redress and erecting statues of Mandela or a mineworker.

This educational and holistic move is repeated elsewhere in the world, in memorials to victims of war, hunger and oppression in many countries, and, most poignantly, in Wittenberg in Germany. High up on one side of the steeple of the cathedral is a despicable anti-Semitic image in stone, common to churches in the Middle Ages: orthodox Jews are depicted suckling on the teats of a sow.

Surely such a monstrous example of prejudice should be erased, particularly in the country of the Holocaust?

The victims have the prerogative to decide, and Jewish websites to this day express extreme discomfort with the continued presence of such images. The bas-relief has been retained, but at the foot of the steeple is a contesting image. What appears to be a metal hatchway, set flat in the paving stones of the courtyard, is being pushed up, but only a little, by the hands of people desperate to escape subjugation.

The strengths and defects of Shaka and Rhodes, their good and wrong-doing, shaped by their personalities and sociocultures, must remain in public view. They are, after all, human, like the rest of us, and their complex legacies still affect our lives.

For that reason, we need to know more about their history than just a monolithic statue or a storm of Tweets can provide. If we erase statues like theirs from the public domain, we and our descendants will find it more difficult to identify our own prejudices, and the recurrence of similar travesties of human conduct in the future.

Chris Zithulele Mann is a South African poet and the former director of the Valley Trust, a community-based health organisation outside Durban.