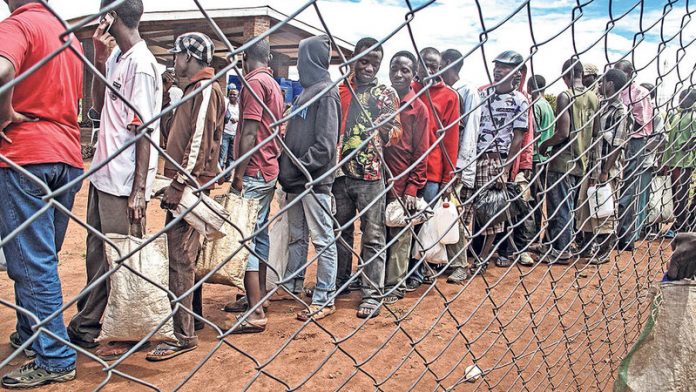 Malnutrition is stalking Malawi’s only refugee camp, Dzaleka, after rations were curtailed following funding cutbacks by the international donor community.

The United Nations High Commission for Refugees (UNHCR) Southern Africa spokesperson, Tina Ghelli, said a humanitarian disaster is looming for the 24 000 refugees at the camp, which is about 45km from Lilongwe.

“Children less than five years, child-headed households, the chronically ill, disabled persons, pregnant and lactating mothers, female-headed households and the elderly are feared to be on the brink of malnutrition. This could lead to an emergency situation if the nutrition indicators further deteriorate,” Ghelli said.

Some women are said to be engaging in “survival sex” to feed their children, and police report a general rise in anti-social behaviour.

Interviews with inmates and the camp’s management also revealed that chronically ill people have lost weight and are unable to comply with their drug regimes.

Sources in the aid community hinted that Malawi’s tough policy on refugees – they are not allowed to leave the camp to look for work, do business or farm – is fuelling the crisis.

Overcrowding is also an issue: Dzaleka served as a political prison during the one-party rule of former president Hastings Banda and was built to hold about 6 000 people.

Responding to amaBhungane’s questions, the government pledged to review laws that restrict the economic activities of refugees but warned that this would take time.

A statement by the UN’s World Food Programme (WFP) said funding shortfalls have forced it to reduce rations and even to suspend the provision of some foodstuffs over the past six months.

The WFP said refugees are receiving 40% of their daily calorie requirements: 6.7kg of maize grain, 0.75kg of pulses and 2kg of fortified corn-soya flour a person each month.

The agency said, without additional funding, maize stocks, even at a half-ration, are set to run out in the middle of this month, and stocks of vegetable oil, pulses and supercereal are likely to be depleted by May. The WFP said $2-million is needed to resume provision of full food rations for the next 12 months.

The camp has hosted refugees for more than 15 years. Most come from the Democratic Republic of Congo, but there are also fugitives from conflicts in Ethiopia, Somalia and Rwanda.

Ghelli said the inability of the refugees to support themselves over such a long time and donor fatigue has led funders to “divert their commitments”.

“Without the right to work or freedom of movement, the refugees are completely dependent on international aid. Some of the donors are tired of supporting these protracted refugee situations, leading to camps such as Dzaleka receiving less and less funding.”

Camp inmates fear for the worst if they are not allowed to earn additional income by working.

“The situation is really bad. We are starving,” said Prime Hakusweyezu, a Rwandan refugee who has been in the camp since 2010. “At the hospitals, there is no medicine; if you get sick, you’re just given painkillers.

“As refugees, we have difficulties in finding money, so life is really tough with reduced rations. We are still waiting for WFP, UNHCR and government of Malawi to help us.”

The deputy camp director, Hirare Namakwa, called for urgent action, saying that “normally each person is supposed to receive at least 19.9kg of maize per month, three times what the refugees are getting now”.

The principal secretary in the ministry of home affairs, Beston Chisamile, said Malawi is using the 1989 Refugee Act, which adheres to the restrictive conventions of 1951.

Chisamile said: “We are working on reviewing this law so that we will lift some of the restrictions. This is a long process; we have to do a lot of consultations. We need to help our friends.”

Malawi is party to the 1951 UN Convention Relating to the Status of Refugees, its 1967 Protocol, and the 1969 Organisation of African Unity Convention Governing the Specific Aspects of Refugee Problems in Africa.

More recently, it ratified the 1951 Convention Relating to the Status of Refugees. But it is yet to accede to the 1961 Convention on the Reduction of Statelessness, which would enable refugees to seek gainful employment.

The current legal framework governing the rights of refugees has been broadened, but these rights are to some extent affected by the nine “reservations” Malawi included in the 1951 convention.

These limitations restrict the rights of naturalisation, health, education, freedom of movement and economic activity.

Meanwhile, the UN and government resources have been placed under additional strain by the continued influx of refugees from the Tete district of northern Mozambique into Malawi, particularly from the border town of Kapise.

The refugees are fleeing sporadic fighting between government forces and fighters loyal to Renamo, which has rejected the results of Mozambique’s recent election and threatened to create an independent state in the country’s northern and central regions.

Al Jazeera reports that 3 500 people have crossed the border, raising concerns of a new refugee crisis in Southern Africa.

Chisamile said, with no end to the fighting in sight, his government had no choice but to take in the refugees and asylum seekers who continue to arrive daily.

“Most of those coming are women and children. We have to assist them on humanitarian grounds,” he said.