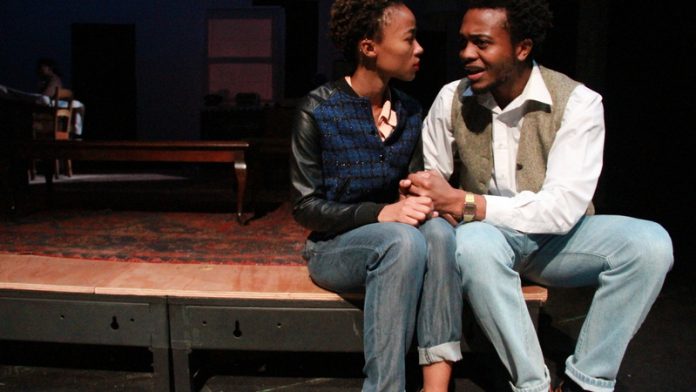 One night in February, we squeezed into a packed Market Theatre in Newtown, Johannesburg, to see director James Ngcobo’s staging of Lorraine Hansberry’s iconic 1959 play A Raisin in the Sun. I’d hoped my partner and I could grab something poisonous at the bar before the play began but after taking in the cramped, jostling scene as we entered, we thought otherwise and rushed into the John Kani Theatre to secure decent seats.

A Raisin in the Sun is about a family living in Chicago’s South Side, going through its everyday struggles “in the squalor it calls home” until an insurance cheque arrives with the possibility of a new life in a new place, somewhere in white suburbia.

In many ways, it could have been a play about the many squalors that we – the black people of this country – experience on the fringes of cities such as Johannesburg, hoping that someday our fortunes will change and we might finally move into the suburbs and into “normal” society.

The production opens in a somewhat morbid atmosphere, with Ruth (Lesedi Job) standing alone in the kitchen before a heap of filthy dishes, contemplating how to make it through another day of the quotidian strife of being black and poor and living in a shitty apartment, with no prospects of ever getting out.

Walter Lee Younger (Paka Zwedala), her husband, enters. He is the apparent nerve centre of the story – young, ambitious and unnerved by the relentless struggle of his family. They live with their young son Travis (who just wants to play), Walter’s mother Lena (who has lost her husband) and his sister Beneatha (a premed student).

The family’s tenuous existence is doubly accentuated by the narrow, claustrophobic space of the lounge-cum-kitchen-cum-Travis’s bedroom. This is where most of the play unfolds. There is a single window looking out on to a block of flats in what might be the Chicago projects; it is this poor existence that weighs heavily on Walter, who is meant to be the man of the house and provider but who – owing to historic, if not current, oppression – is rendered ineffectual, castrated and damned to poverty.

It is this stasis that can be read, through his body and his movements, as the cause of his aging, for poverty wears you out much faster than a life of means does.

When the insurance cheque finally arrives, there is a sense of relief, both on stage and in the audience, but with it comes a new wariness: Walter’s grand scheme of opening a liquor store seems doomed from the start.

Ngcobo has made plausible choices in his actors. Although Zwedala is able to carry the weight of the play as its central figure, it is in Job that his character finds relief. Her Ruth is believable, worn out and hopeful; she becomes a specular surface through which the audience begins to take in, albeit uncomfortably, a portrayal of a life that has been made the kaffir of society. Her portrayal of a young black woman, mother and wife is a terrible indictment of our society.

Beneatha (Gaosi Raditholo), initially a character one might dismiss as being too jovial and optimistic for her situation, adds more layers to the production, what with her Nigerian suitor who gives a curious prognosis of the African-American condition.

Maybe it’s because I enjoyed the play so much that I found it too short. There was one memorable scene, however, that I suspected to be pure improvisation and that I doubt would ever be repeated. It is when the corner of the carpet in the lounge flips over and snarls at us and, one by one, the characters refuse to fix it, for it would completely undo the logic imbued in each characterisation. Eventually, Lena (Trena Bolden Fields) bends over to fix it.

The question posed by the play is: Who will fix this untenable socioeconomic oppression against black people, black women especially? And when? For with each passing day, more black lives are interred in a bleak existence that should raise flags for anyone with a conscience.

We’ve tried leftism for long enough and what we have to show for it is corruption and mismanagement, when what we need is jobs and education. Is it time to try out a Mashaba-esque version of right-wing politics?
Read more
National

The City of Cape Town admits it monitors the social-media pages of housing activists but denies that this is spying, as tensions surrounding land occupations increase
Read more
Motoring

With internet lag keeping them from global competition, local gamers have settled on a format for EA’s FIFA 2020 allows 11 people to play as a team. And the prize money in local leagues is growing. Eyaaz Matwadia boots up for the first instalment of Gaming Corner
Read more
Coronavirus

The producer spoke to Cayleigh Bright on the day the Cape Town Opera returned to rehearsals after almost six months of lockdown about the future-proof transcendence, resilience and relatability of opera
Read more
Advertising
Continue to the category
Politics