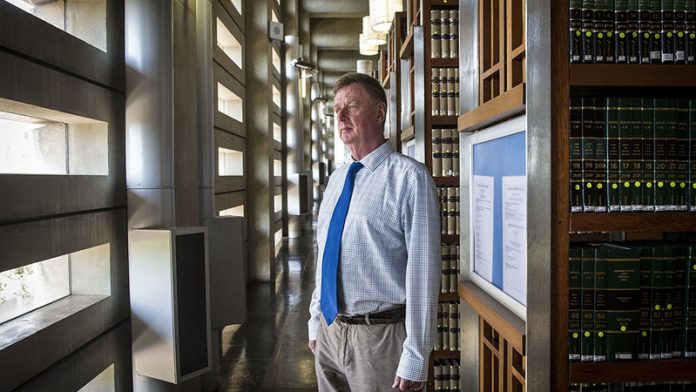 Recently retired Constitutional Court Justice Johann van der Westhuizen’s sense of humour is casual and wryly observant of human nature. His laughter is easy, but understated; it withdraws back into his throat with light intakes of breath – as if not to draw too much attention to himself.

The laughter appears in keeping with the character of the man himself. Following his appointment to the Constitutional Court in 2004 by then president Thabo Mbeki, Van der Westhuizen kept a relatively low ­profile while media darlings such as Deputy Chief Justice Dikgang Moseneke and Edwin Cameron – often lauded for their progressive judgments and their legal intellects – made the headlines.

One gets the impression that Van der Westhuizen preferred it that way: being allowed the less pressured space to shoot off the odd quip or trenchant question during arguments, while getting on with the job of ensuring the Constitution was a living, working document through his judgments.

Sometimes, as in the case of a minority judgment in the Zulu and Others vs the eThekwini Municipality and Others matter, Van der Westhuizen dared to go further than his more celebrated colleagues.

In that case, the eThekwini municipality had been using a court interdict that prevented further homes being built on occupied land to evict people already living there without due consideration for the Prevention of Illegal Evictions Act.

Although the majority found the action illegal and sent it back to the high court in Durban, Van der Westhuizen believed the matter should have been finalised in the country’s highest court.

His concerns about the vulnerable community continuing to bear the brunt of the municipality’s illegal evictions were borne out as, the day after the case was heard in the Constitutional Court – and despite denials by the municipality’s lawyers – the original court interdict was again used to force people from their homes.

Van der Westhuizen’s lucid reasoning and application of the law was apparent in another minority judgment in the Democratic Alliance vs African National Congress and Another matter, or the “SMS case”.

The matter dealt with whether the DA had contravened sections of the Electoral Act following the release of public protector Thuli Madonsela’s report on Nkandla by sending out a text message that read: “The Nkandla Report shows how [President Jacob] Zuma stole your money to build his R246m home.”

The text, sent to ­voters before the 2014 national elections, urged them to vote for the DA “to stop corruption”.

Noting that Van der Westhuizen’s minority judgment had “mopped up” a sloppy majority judgment in favour of the DA, political analyst Eusebius McKaiser wrote that he had “put politics aside, didn’t worry about the consequences of getting the law right, and convincingly showed that the court cannot be disinterested in the truth status of opinion if it wanted to apply the Electoral Act to the facts.”

This was at a time when there are growing concerns that the court may lurch towards conservatism following the 2009 retirement of three judges and the more recent retirements of Zak Yacoob in 2013, Thembile Skweyiya in 2014 and Moseneke later this year.

Van der Westhuizen, who retired at the beginning of February, argues that, in South Africa, it is much harder to brand judges “conservative” or “progressive” than in the United States, because of the “complex psychological make-up” of judges from different backgrounds and their “baggage”, which may include “respect for authority and for discipline”, one’s religion or atheism, and core sociological make-up.

“Sometimes I am concerned about an overly technical approach,” admits Van der Westhuizen, whose own jurisprudence suggests a “big-picture” approach to the law, “although at the same time I will never deny the importance of detail and proper procedure”.

“Part of my general worry about an overly technical approach is that the law is not used for something that it should be [dispensing justice], it’s used as part of a strategy to avoid justice,” he says.

It is apparent that Van der Westhuizen’s character is formed as much by a personal search for ideas and knowledge as by the people around him. While on Constitutional Hill he worked with grand legal minds of the calibre of former chief justices Arthur Chaskalson and Sandile Ngcobo; in his early years, it was his parents.

His mother, Anna, was protective, God-fearing and “dead against anything that could possibly get you into any possible trouble”, such as playing rugby in the sun or getting involved in struggle activities.

His father, Vincent, a rambunctious civil servant with a “deeply anti-authoritarian” streak, cruised with cops on their raids to feed the stories he wrote for popular magazines in his spare time.

The family was “effectively expelled” from Namibia (then South West Africa) while Van der Westhuizen was young. This was after his father wrote a piece of “complete fiction” for Huisgenoot magazine, describing Windhoek’s mayor as “a bleached bullfrog” and the South African administrator of South West Africa as having the “stigma of a materialist”.

“Yes, he was a very complex figure,” Van der Westhuizen says of his father, whose deep regret was being too young to fight the Germans in World War II yet “seemed to have a bizarre fascination with the drama and the show of the Nazi era”.

With the family back in South Africa when grand apartheid was being rolled out, Van der Westhuizen senior was deployed to the department of Bantu education and then the department of information, “where his job was to basically write apartheid propaganda … promoting the homeland policy and so on”.

At night, however, Vincent van der Westhuizen would write about love and crime: “Some of his early poetry had elements of revolutionary thought in it. I remember when he sat on my bed in the evenings and read them to me – and then I was very, very small – one did have the phrase: ‘Die rooi vlag van weerstand [the red flag of resistance],’” Van der Westhuizen remembers of his father’s works, some of which were included in early editions of Die Groot Verseboek of Afrikaans poetry, edited by André Brink.

From his father, Van der Westhuizen developed an early ­recognition of police brutality against black people and an appreciation for the writings of Eugène Marais, Johann Wolfgang von Goethe and Friedrich Schiller – and a touch of the maverick that emerges in some of his judgments, despite a laid-back persona.

His mother insisted on “high academic achievement; she was always very disappointed when I was not in the top three in the class. It meant a lot to both him and her – for him more for the attention and the glamour; for her, substantially, for me to have positions within the system, to become the deputy head boy in the school or whatever it was.”

This emphasis on academic application and literature, he suggests, assisted in the journey of political conscientising for a young boy who “from very early on” had a niggling sense of “acute embarrassment when it came to race relations”.

Van der Westhuizen was affected by “things like teachers saying: ‘Don’t pick up a coin in the street because you never know if a dirty old black man might have had it before.’”

“I was not an anarchist,” he says. “What happened, I think, is that gradually, as I developed intellectually, these suspicions, this uneasiness, this discomfit that I always had, gradually, I found intellectual and legal material to support it” in the writings of philosophers such as John Locke and Immanuel Kant.

Increasingly involved in politics – including challenging students’ notions of apartheid’s legitimacy through course work – Van der Westhuizen was among the delegations of Afrikaners who started meeting with the ANC in Lusaka, Harare and Dakar. He usually returned from these meetings to student protests and calls for his sacking.

Van der Westhuizen was intimately involved in the drafting of the Constitution in 1995 and 1996, serving on the independent panel of experts and the technical refinement team responsible for the final version of democratic South Africa’s founding document.

Remembering one of the final three constitutional deadlocks being over its property clause, Van der Westhuizen marvels that since he joined the Constitutional Court in 2004, after five years as a high court judge in Pretoria, the concept of arbitrary deprivation of land has still not been tested at Constitutional Hill.

In his farewell speech during a special sitting of the Constitutional Court, Van der Westhuizen concluded with a wish list that included a strengthening of democracy, the eradication of poverty and corruption, and respect for judicial independence.

His final wish was that “our country will emerge from the suffocating depths of racism … I wish that all of us, before we solemnly declare: ‘I am not a racist’, would pause and look deep into our hearts and souls and our motives. The world is not black and white. There are 50 shades of grey, or brown. Few of us have been left untouched by our past.”