We need to do reconciliation differently 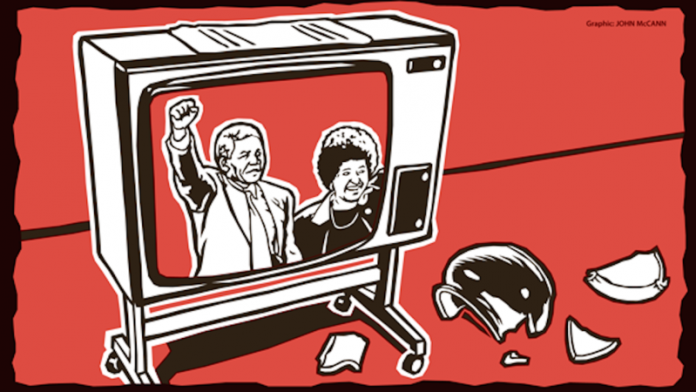 Twenty-six years ago, Nelson and Winnie Mandela bequeathed us the famous picture of them walking out of Victor Verster prison, through the madding crowd, holding hands and with their fists raised in an “Amandla!” salute.

In this picture we saw our country, our dreams of freedom, and ourselves. When Nelson and Winnie raised their fists, we felt democracy churning in our stomachs.

I watched this surreal moment unfold on a small black-and-white television set, at a house in Makhulong Section, Tembisa, on the East Rand. It was Sunday February 11 1990, shortly after 4pm. With Winnie at his side, in his first public speech, Nelson Mandela defined the style of leadership he aspired to when he said: “I stand before you, not as a prophet but as a humble servant of you, the people.” He concluded by saying, among other things, that “our march to freedom is irreversible”.

Twenty-six years later, all our impressive achievements notwithstanding, I am not sure that the irreversibility of our gains or, to use Mandela’s words, our march to freedom, can still be taken for granted.

Nothing illustrates this possibility better than the dire state of our core national project – the very scaffolding on which post-apartheid South Africa has been premised, namely, the notion of reconciliation. It is, of course, not as if South Africa has a monopoly or an exclusive copyright on political reconciliation as a national project. It was the official policy of Robert Mugabe immediately after the Lancaster House agreement that paved the way for Zimbabwean independence in 1980.

Reconciliation was the vision around which South Africa was to be rallied. Today, reconciliation, together with its sister notions of negotiation, truth and forgiveness, lies in ruins. Rather than negotiate, we have seen university students fight physically among themselves – sometimes with their parents, fists flying, at their sides. Instead of protesting creatively, albeit loudly, we have seen South Africans burn, loot and kill. Rather than negotiate, we have seen our police reach for their guns. Again and again we have seen men assert their violent masculinity to violate and terrorise women, and exercise control over them.

No amount of verbal gymnastics or endless appeals for social cohesion will mask the fact that multiracialism and nonracialism are in deep crisis. Many suggest these are notions that are increasingly being misused, misunderstood and watered down. That may be true.

These notions, premised as they are on the idea of race as a serious proposition, are under attack. As Robert Sobukwe and the Pan Africanist Congress taught us many years ago, there is only one race: the human race.

Consider the idea of the rainbow nation – a powerful ideal meant to privilege tolerance, mutual acceptance and unity in diversity. Many have become cynical about it. Look around you, tune your ears and open your eyes wide, and you will see that daily we walk like ghosts through the ruins of what used to be our founding metaphors, in a country that is slowly slipping from our grasp.

The same goes for forgiveness. Several articulate “born-frees” have started questioning the wisdom of unsolicited forgiveness. The younger generation is asking fundamental questions about the assumptions on which the South African forgiveness project is built. As the title of a recent article by Panashe Chigumadzi has it: “Your wisdom sucks, old people.”

How did we end up here? From the top of the heap of our smouldering dreams, we ought to do better than blame the usual culprits: the blacks, the whites, the ANC, or even our latest national culprit, the president.

I still believe in reconciliation. It is cheaper than stun grenades, water cannons and live ammunition. But I think we should do reconciliation differently. We have to do it right.

To begin with, we must cease understanding reconciliation as something blacks must do for whites (or even vice versa), not only because historically blacks have done a lot of things for whites, so it’s superfluous, even demeaning, to ask them to do more, but also because racial reconciliation, especially when understood superficially, is not the be-all and end-all. Eugene de Kock may be forgiven but not Robert McBride, Craig Williamson but not Winnie Mandela, Barend Strydom but not Allan Boesak.

There are neglected dimensions of reconciliation.

Class is an area crying out for reconciliation. We are not talking of the rich passing hand-me-downs to the poor. We are not talking about do-gooders doing charity work. Rather, we are talking about deliberate policy interventions aimed not only at increasing wealth or expanding the middle class as a buffer between the stinking rich and the super-poor but also at creating real economic equality among South Africans. True reconciliation is only possible between economic equals.

We need reconciliation between black and black. Apartheid did not just separate black from white; it also separated black from black. Black-black strife takes various forms (and note that I am not talking of the poisonous notion of “black-on-black” violence). Sometimes the fault lines are political, such as those that existed between the PAC and the ANC, the ANC and the Black Consciousness Movement.

An issue we often shy away from is the challenge of ethnocentrism and Afrophobia. We have seen it rear its ugly head not only in the xenophobic attacks but also in the power blocs within the ruling party and government, where it has taken shape through the creation of regional and ethnic factions and enclaves. Just below the surface of normality, there are simmering tensions between Africans and Africans, between Africans and coloured people, and between Africans and Indians. When will we begin to do the requisite reconciliation work in this terrain?

There is a gender dimension to reconciliation, too. In her recent book, Rape: A South African Nightmare, Pumla Dineo Gqola traces the roots of the nightmare to slavery, colonialism and apartheid masculinities, as well as the violent masculinities of liberation and “post-liberation” times. To illustrate, Gqola analyses stories, reported in the mainstream media over the past few years, of the most horrendous assaults on women and children.

These commonplace acts of human violation, are performed smack in the middle of our raging democracy, adorned as it is with all the colourful constitutional and human rights paraphernalia – and they are deftly executed across all sections of the population. Some of the culprits are recognised heroes in society, men who have perfected the language of “women empowerment” and are also fluent in the knowledge of which women can be raped and which are “legally impossible to rape”, as Gqola points out.

The latter include an expanding list – wives, sex workers, girlfriends and lesbians. Add to this the never-ending patriarchal discourse designed to police and legislate how women wear their clothes, their hair and their skins!

We need to address the question of land, going beyond the jaded notions and slow process of land reform and land redistribution. Once a people have lost respect for, and their affinity with, the land on which they walk, work and live, how can they be reconnected to it?

This is the dilemma in which many black South Africans find themselves. Even when the land commission eventually awards claimed land back to some communities, they do not know what to do with it, so they often take the cash. Can people assume a sense of ownership of a country and a state built on land from which they have been alienated?

It seems to me that, until now, many black people have been trying to forgive everyone and everything except themselves. Here I refer to internal forgiveness. Part of the current intergenerational strife in the black community, including the lazy blaming of Mandela for apparently “selling out”, could be symptoms of a traumatised community that has not forgiven itself for the many years of apartheid and its stubborn legacies.

It is easier, even safer, for victims of abuse to reinforce their victimology, turn upon themselves and upon their own, than to forgive themselves – let alone confront the original abuse.

Could this be why they constantly seek validation, acceptance, clout and meaning externally, in the languages, ways and cultures of others rather than their own?

Professor Tinyiko Maluleke teaches at the University of Pretoria. The views expressed here are his own. Follow @ProfTinyiko on Twitter