Former ANC MP Vytjie Mentor’s alleged accusation that the Gupta’s offered her the position of public enterprises minister a few years ago proves that the politically connected family has captured the state, the Democratic Alliance (DA) said on Tuesday.

This statement from the DA follows comments made on Facebook, allegedly by Mentor, detailing a meeting with the Guptas at their Saxonwold home. DA member and former Congress of the People spokesperson Johann Abrie also allegedly posted on Facebook detailing the Guptas’ attempts to buy politicians.

The Mail & Guardian was unable to verify whether Mentor and Abrie did in fact make these posts on social media, nor the authenticity of the allegations.

Mentor commented that, at the meeting, the Guptas allegedly offered her the position of Minister of Public Enterprises. This after President Jacob Zuma axed Barbara Hogan as minister in 2010. Mentor was apparently offered the position in exchange for dropping the South African Airlines flight-route to India and then giving it to the Gupta family. Mentor said she refused the offer. 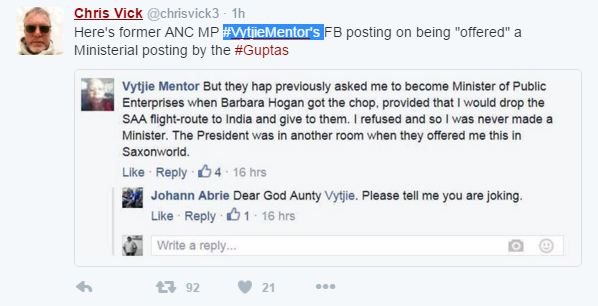 She was responding to another post by Abrie, who said in a Facebook post that President Zuma was sitting in another room in the Guptas’ home when the exchange with Mentor occurred. According to the post, Abrie has proof “in black and white” that the Guptas met with Mentor. 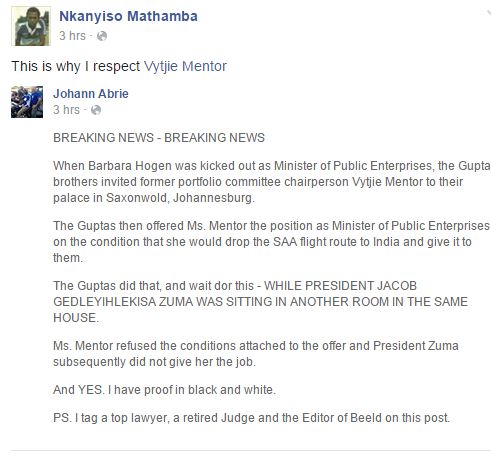 Abrie further commented: “The Minister of Finance did not confirm or deny the fact that the Gupta brothers approached his deputy, Mcebisi Jonas for the job as Finance Minister. For those of you able to read between the lines, this mean that deputy minister Jonas is the second person (after the Minister of Sport Fikile Mbalula) who were approached by the Guptas for a job as Minister instead of by President Zuma. It is now clear that Zuma abdicated his job of appointing Ministers to the Guptas.”

Democratic Alliance shadow minister of public enterprises Natasha Mazzone said on Tuesday that there was “growing evidence that the Guptas are complicit with President Jacob Zuma in capturing the apparatus of state for their personal gain.”

“Both the Guptas and the President must provide the South African people with the answers they deserve.”

Mazzone has requested that the Gupta family appear in Parliament to answer questions.

Mazzone said Abrie had alerted her and the DA in Parliament to Mentor’s comment.

She said the DA had verified that the Facebook account did belong to Mentor, who was currently on holiday in Thailand.

Mazzone said the Zuma and his “cronies” were benefiting from a patronage network that only benefited the connected few.

The Gupta family, which is said to have strong ties with President Jacob Zuma, his family and other ANC leaders, has been accused of offering top ministerial jobs.

At the weekend, reports emerged that they had offered the job of finance minister to deputy minister Mcebisi Jonas, two weeks before Nene was removed and replaced with Van Rooyen.

Jonas reportedly turned down the job.

There have also been reports that Sport Minister Fikile Mbalula heard he had been appointed a minister through the Guptas. –  News24 (Edited by Michelle Solomon)