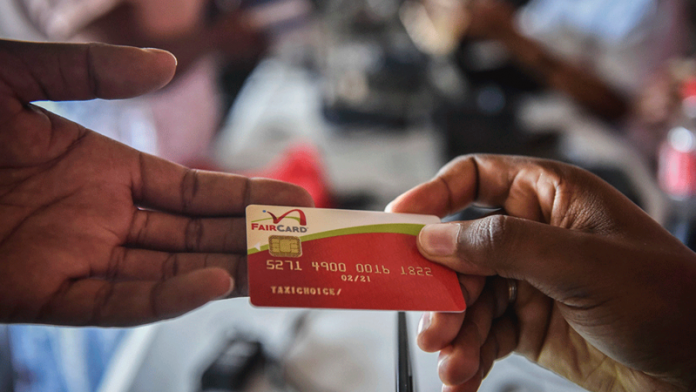 This time it wants to revolutionise how commuters conduct other financial affairs too, on top of bringing the rowdy taxi industry in line.

Over the next four years, commuter taxis under Santaco will gradually become cash-free, with customers preloading cash on to a Fair Pay card, called the FairCard, that is swiped inside the taxi. The fare is deducted electronically.

The system will also allow commuters to buy groceries at selected retail outlets, with a monthly limit of up to R3 000, or a once-off deposit of up to R2 500, in competition with bank debit cards.

“The card is completely free to obtain, and for taxi trips carries no transaction charges,” says James Chapman of Taxi Choice, Santaco’s trading arm. “It is also a cheaper option for other payments: even though the buyer does have to pay a transaction fee set by each trader, we are hoping over time – and once we acquire a critical mass of customers – to be able to negotiate better banking fees for users of our cards.”

About 200 000 taxis operate in South Africa, with about 15-million passengers every day, generating more than R90-billion a year in fares. These are collected by drivers, then handed to owners, who tend to use it to settle expenses directly rather than channelling it through the banking system. That leaves the money circulating informally, making regulating it difficult. So the FairCard is also an attempt to bring the ill-disciplined taxi industry into fiscal line.

“Card payments will help clean up the image of the taxi industry. An electronic record of income will help the taxi owner to access finance.

“The salaries paid electronically to taxi drivers will bring them into the formal economy, and they can use their salary slips to apply for credit or home loans. They can get medical aid and insurance,” Taaibosch said.

“Money generated by the taxi industry can no longer fall through the cracks.”

Unscrupulous drivers
Taxi owners estimate that between 35% and 50% of fares are discreetly pocketed by drivers. They claim that theft of petrol is a major headache. Commuters also complain about overloading, speeding, shortage of change, arguing over fares, and drivers who don’t concentrate on the road because they are dealing with cash. With the new scanner (which includes a GPS that can monitor speed and location), these should become things of the past.

The system was initially rolled out at a pilot phase in Pietermaritzburg last year. The card-reading device was fitted in 115 taxis from the Grand Westgate Taxi Association, and kiosks were built at the central city taxi rank for customers to buy cards.

The FairCard is free to obtain and carries no transaction charges for taxi trips (Photos: Jonathan Burton, M&G).

Chapman says: “A lot of customers just purchased their fare for the day, or a few days, but we were also surprised by how many people loaded their cards to the limit of R2 500. They immediately grasped that this was a low-cost debit card which – unlike other debit cards – can also be used to pay their taxi fare.”

“At present, the association operates both the card and the cash on its routes. One route is card-only. Once this is operating smoothly, other routes will be switched over.”

But Santaco is not underplaying any potential resistance to the new system: the disorganisation and corruption of the past have allowed many operators in the taxi industry to line their pockets. And they are going to put up a fight.

Jotham Msibi, Taxi Choice Association’s chairperson, says: “In Pietermaritzburg in October 2015 we put up the kiosks, trained our staff, printed the cards to distribute. People were very enthusiastic at first. But then local politics interfered.”

In November 2015 a group of residents marched in the city centre and blocked the road, joined by taxi drivers who had been told they were about to lose their jobs. The mob burned the kiosks, assaulted Taxi Choice staff, and threw stones at passing cars. Commuters who had already bought their cards went back to Taxi Choice and demanded their money back.

Chapman says ruefully: “They said that, while they loved the idea, if it meant that they would be stoned and attacked, they would rather not have it.”

But by March the pilot was back up and running. At the main market taxi rank in Pietermaritzburg last week, a line of commuters stood in the rain waiting to load cash on to their cards. They said the queuing was inconvenient.

“We don’t want to stand in a line in order to buy our taxi fares when we can just give it to the conductor,” said schoolboy Sihle Ntsele, adding that if he bought more than one taxi ride at a time, the inconvenience would be decreased. He was, for the first time, about to buy R100 worth of taxi fares.

“We have known about this system for a long time,” said shop assistant Thobeka Mthembu, “but people are slow to change. I think we are just seeing teething problems now, but in the end this is a good idea.”

Taxman and the banking sector will benefit
Office worker Simphiwe Mhlongo was worried that taxi drivers and conductors would not like the new system if it led to job losses, and he was expecting taxi strikes.

“But I like the idea, especially if I can use this card to pay for groceries as well,” he said.

None of the taxi drivers working for the Grand Westgate Taxi Association was prepared to comment, but taxi owners from Grand Westgate were broadly happy with the scheme.

“We have told the taxi drivers and conductors that they will not lose their jobs because of this,” said one, who didn’t want to be named, adding that it would cut down on theft of fares and benefit the drivers in the long run, because they would now get payslips and records of employment.

Another owner commented that he would also have liked to have dash-cams installed in his taxis, to monitor passengers and behaviour.

“But this is a good start,” he concedes. “We are happy that now we have records of income and we can control our businesses better.”

The biggest beneficiaries of the system, however, will be the taxman and the banking sector.

Fares will be deducted electronically via devices installed in taxis.

Keith Smith, advisor to the department of transport and one of the architects of the Fair Pay card concept says: “This free card is a cheaper option for a lot of poor people as it brings down the ‘cost of cash’. It uses open-source software instead of the proprietary software used by many banks. This makes it cheaper to operate.”

A device that reads the Fair Pay FairCash card will be installed in taxis over the next four years, but previous attempts have been marred by violence.

Payment cards have a troubled past

Violence has thwarted attempts in the past to introduce cashless fare systems in minibus taxis.

In 1999, several taxi drivers with rival taxi associations were killed in Soshanguve, north of Pretoria, after two rival card payment systems were introduced.

The operators, including Santaco forerunner the SA Local and Long Distance Taxi and Bus Organisation, insisted that the payment systems were not at the heart of the violence, but admitted it may have served as an excuse to settle old scores. The operators said the cashless systems would prevent overloading and petty fraud, but the provincial government shut it down in the face of continuing violence.

In 2007 Santaco started trials of an electronic fare-collection system on a route between Johannesburg and Pretoria, saying it would complete a national rollout by 2009. The system, the organisation said, was intended to combat violence by preventing operators from running on routes not assigned to them. – M&G Reporter