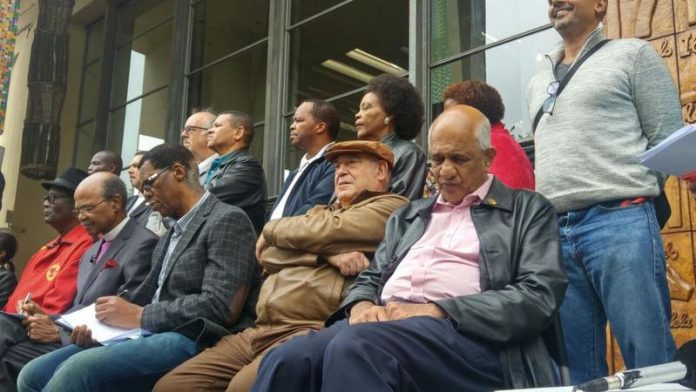 Top African National Congress (ANA) veterans, including Cheryl Carolus, Mavuso Msimang and Ronnie Kasrils, gathered at the steps of the Constitutional Court on Wednesday and joined the chorus of calls for President Jacob Zuma to step down.

Carolus said by voicing her dissatisfaction with her party, the ANC, it did not imply that she was a disgruntled member of the ruling party.

“I am a loyal cadre of the ANC. It is my organisation. It saddens me to stand here, as I never thought I would be worried about my president. Yesterday was a frog in the pot moment for many of us to witness what the party has become,” she said.

“I watched last night and was sad that this actually happened under our watch. I call on everyone and those in the ANC to stand up and say ‘enough is enough’…president please resign!”

“The lawyer-turned-politician, whom I shall not name as I am ashamed to do so, told the nation from Parliament that the Constitutional Court did not find the president guilty of any serious wrongdoing,” Yacoob said.

Yacoob was likely referring to Deputy Justice Minister John Jeffery, who staunchly defended Zuma during Tuesday’s debate in the National Assembly on a motion to impeach Zuma.

“The court left it to us to decide how serious this matter is. Our president has acted miserably, dishonestly and horribly. I call on the ANC NWC (national working committee), cabinet to look beyond the legality…look into your conscious my ex comrades! Zuma, please go.”

He added that it was not right to blame Zuma alone, and that the work ahead was bigger.

“What has emerged in the ANC that I am a member of is something that I do not know. What is happening is a serious crisis. I hope it is not too late for the ANC to remove the president …Zuma, please resign.”

Msimang said he would be consulting with members of his own branch in Midrand to deliberate on what to do as an ANC branch.

The mobilisation to get Zuma to step down would begin on April 16 with a dialogue on the country’s political climate.

“We call on you to discuss what is wrong with the country and more importantly what is needed to do right. We call on people to hold organised discussions in churches, villages, mosques, informal settlements, sports clubs about how to secure the resignation of Zuma. We call on you to drop any other plan you have and join that dialogue,” said Reverend Moss Ntla of the Evangelical Alliance of South Africa.

April 27, which is Freedom Day in South Africa, would be the day of action, where “freedom that was stolen by Zuma would be claimed back”, Ntla said.

The ANC accepted Zuma’s apology on the Constitutional Court ruling regarding the drawn-out Nkandla debacle, and has called for “forgiveness”. The ruling party said it remains behind Zuma and has rejected calls for his removal. – African News Agency (ANA)

Mary Corrigall spoke to the celebrated South African designer on the release of the Heritage capsule collection.
Advertising