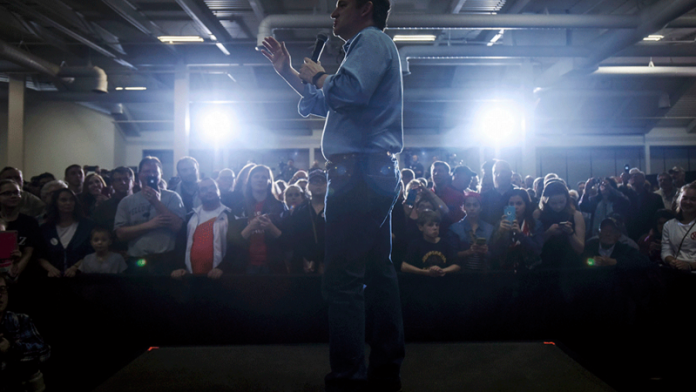 Cruz was projected to have won the important Midwest showdown just over half an hour after polls closed. As the scale of his victory across the state became clearer, the Texas conservative was estimated to have won at least 33 of the 42 delegates on offer, limiting Trump to just a handful. In his victory speech, Cruz looked ahead to the convention in July and vowed he would win the 1 237 delegates needed “either before Cleveland or at the convention in Cleveland”.

The Texas senator said: “Tonight is a turning point [in the Republican primary]. It is a rallying cry … We have a choice, a real choice.” And he echoed John F Kennedy in saying “Wisconsin lit a candle guiding the way forward” for Republican voters in future primaries.

Hillary Clinton also stumbled on her path to the White House, losing to Bernie Sanders in a Democratic primary that marked a sixth straight win for the Vermont outsider and shows his continued appeal among voters looking for radical change.

With 99.8% of the results in, Sanders was winning by more than 13 points, though the Democrats’ proportional system of allocating their 86 pledged delegates will limit the impact of his victory on the national race. Clinton had a commanding lead of 263 delegates at the start of the night.

Sanders’ victory speech came at a rally in Laramie, Wyoming, where the campaign has its eye on the next caucus on Saturday April 9 and was in a defiant mood despite the difficult mathematical challenge ahead.

“If you ignore what you hear in the corporate media, the facts are pretty clear: we have a path toward victory, a path toward the White House,” said the visibly energised senator to excited shouts of “Bernie, Bernie”.

“Let me say a word, well perhaps two words, about what momentum is all about,” he added, describing how the media had dismissed him as a fringe candidate who started by 60 to 70 points behind in polling but had failed to realise what was motivating voters. “From coast to coast … people are saying why is it we have grotesque levels of inequality? … Why is it the great middle class of this country has been shrinking?”

He raised recent tax disclosures in Panama for the first time on the campaign trail, claiming the revelations in the Guardian and elsewhere were “one of the reasons I oppose the [2011] free trade agreement with Panama” and showed “exactly what I feared would happen … with wealthy people and large corporations figuring out how to avoid paying their fair share of taxes.”

Sanders said he could close the remaining delegate gap in the nomination race by persuading Democratic “superdelegates” – party elites, the vast majority of whom are backing Clinton – to change their minds, prompting a fierce response from Clinton campaign manager Robby Mook.

“Your vote is your voice, and the Sanders campaign shouldn’t be trying to circumvent the process – or the nearly nine million (and counting) people who have made their voice heard for Hillary in this election,” he wrote in an email to Clinton’s supporters.

Both victories were in line with recent opinion polls in Wisconsin, but the win for Cruz – his ninth in the 2016 nomination race – comes at a crucial time for the Republican party in particular.

Trump has lost his top spot in some national opinion polls and faces a difficult path to securing the 1 237 delegates needed to win the nomination outright, even though he is still comfortably ahead of Cruz.

Trump’s recent controversial remarks suggesting women should be “punished” for having abortions also seem to have cemented a growing and significant unpopularity among female voters.

And the Wisconsin defeat follows similar losses in the neighbouring states of Iowa and Minnesota, a region where polite traditions of “Midwest nice” do not always sit easily with Trump’s aggressive New York rhetoric.

Cruz won after receiving the support of most of the state’s power structure. Influential governor and former presidential candidate Walker as well as nearly every conservative talk-radio host in the state rallied behind the Texas senator in a last-ditch effort to stop Trump in the Badger State.

Cruz had long led in polls of the Midwestern state, but Trump had crisscrossed the state in recent days, even bringing out his wife, Melania, in an attempt to close the gap.

He touted one outlier poll that showed him ahead, bragging on Monday night: “You see what’s happening with the polls? Boom, like a rocket ship.”

Yet in a state where, according to exit polls, only 6% of Republican voters saw immigration as their top issue and a majority said they would be scared or concerned if Trump was the nominee, it wasn’t enough.

In the week preceding the primary, Trump’s campaign manager was arrested for battering a reporter and the candidate repeatedly flip-flopped on abortion after his controversial initial remarks.

This, combined with a series of controversial remarks on foreign policy, including saying that “nuclear proliferation is going to happen anyway”, had left Trump at his most politically vulnerable in months. By the eve of the state’s primary, the frontrunner had fallen out of first place in a national tracking poll for the first time in months.

Trump bashes Walker
Trump didn’t help his cause by repeatedly bashing Walker. He attacked the Wisconsin governor’s stewardship of the state’s economy and boasted that he had “sent him packing like a little boy” from the presidential race. Unusually for a Republican candidate, Trump even attacked Walker for not raising taxes.

Though the attacks were well-received at his rallies, where many attendees – such as Sheila Roth of Wausau – were Democrats who had voted for Obama and against Walker but thought the Republican candidate would “be good at bringing the jobs back to America where we need them”, in a state where Walker has won three elections in the past five years, this approach did not play well with many conservatives.

Trump still maintained some pockets of strength in rural, heavily Catholic areas in the north and west of the state, however, but these were eclipsed by Cruz’s strong performances in the so-called “WOW counties” of Waukesha, Ozaukee and Washington that ring Milwaukee. The Texas senator had counted on a strong performance in these areas, which had been crucial to Walker’s electoral success and provided Mitt Romney with his winning margin over Rick Santorum in the state’s 2012 presidential primary.

Cruz even held his election eve rally in crucial Waukesha County, the most populous of the three, to shore up his base there.

In a statement, Trump raged about “lyin’ Ted”, saying: “Cruz is worse than a puppet – he is a Trojan horse, being used by the party bosses to steal the nomination from Trump.”

Yet Cruz’s win still leaves him more than 200 delegates behind Trump in the race to reach the 1 237 mark needed to clinch the nomination and the Texas senator conceded that a contested convention, which he once derided as “a fever dream”, is now a likely scenario.

Further, the Republican primaries for the rest of April occur on Trump’s home turf. On April 19, Republicans will vote in Trump’s home state of New York and the so-called “Acela primary” will be held on April 26 when Connecticut, Delaware, Maryland, Pennsylvania and Rhode Island hold their primaries.

Polling and demographic data indicates that these states should be strongholds for Trump. But the Republican race still remains uncertain. All the normal rules of politics have seemingly been suspended so far, and, as Trump said at a campaign rally on Monday night: “I don’t care about rules, folks.” – © Guardian News & Media 2016