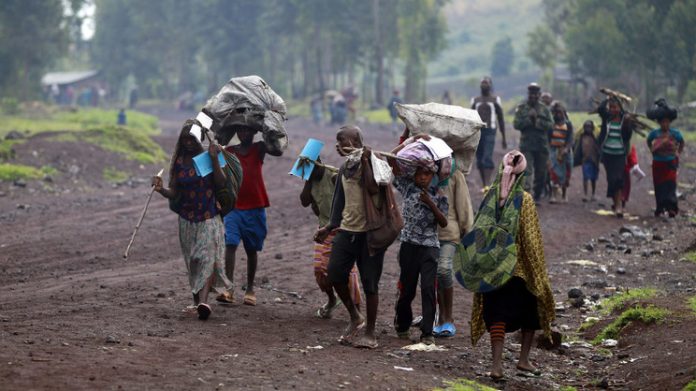 It wasn’t meant to be like this. The separatist rebels that had caused years of chaos in this southeastern corner of the Democratic Republic of the Congo were pacified. The people who had fled their homes were back farming. The rains on which they depend were on time. But then the rains just didn’t stop.

This season it poured – sometimes three times a day. The seeds diligently planted rotted underground. As a result up to 40 000 people are at risk of going hungry just in this small area of Katanga Province, according to Marrios Bwana Ngoshi Ilunga, of the NGO Solidarités International.

Across the DRC as a whole, 550 000 people have been affected by rains and flooding between October and March as a result of an El Niño year.

Three years ago, this region was known as the “triangle of death” – but for a very different reason. The Bakata-Katanga rebels, claiming to fight for the independence of mineral-rich Katanga, were busy looting and burning down villages, killing their inhabitants and forcibly recruiting others, in a swathe of territory between Pweto, Mitwaba and Manono.

Paul Masengo Kipekwe had to flee twice from the Bakata-Katanga (literally “cut Katanga” in Swahili). The first time was in 2013, when he was living in Pongo. “When they came, the Bakata-Katanga burnt our houses, looted our cattle, destroyed our fields,” he said.

He took his family to Kanyoka, a few kilometres away, but that was no safer. They came the following year, and he had to move again. At the height of the unrest, the UN’s emergency aid coordination body, OCHA, estimates 607 000 people were affected by the violence.

A series of offensives by the national army last year destroyed several rebel camps, weakening them. The number of displaced fell to 309 000 in 2015, as people began to return home, hopeful that a government amnesty for the rebels and a disarmament programme would succeed.

Paul Masengo Kipekwe had to flee twice from the Bakata-Katanga twice. He and his family remain displaced, and face hunger and uncertainty. (Photo: Habibou Bangré,  IRIN)

Meagre harvest
Kipekwe is back in Kanyoka, where he received a basic three months’ food package of corn flour, beans, vegetable oil and salt funded by the World Food Programme and the European Commission’s humanitarian arm, ECHO. ECHO has also financed the supply of maize, bean and peanut seeds, along with farming equipment and training – all delivered by Solidarités.

Kipekwe started farming in December, but the rainy season has been so heavy that he expects to harvest very little in the May-June season.

“When we came back here, we were very worried because our fields were destroyed. Those rains really make our situation worse. Beans and maize seeds have really been affected. Peanuts are our only hope,” said Kipekwe, who is hoping for an extension of the food aid. In the meantime, his family eats baby cassava roots to get by.

Jean Bisongo Kabika, another villager from Kanyoka, fled the Bakata-Katanga three times. Two of his children died from the consequences of malnutrition. But unlike many of his neighbours, he has not started farming yet, and is not very motivated to do so.

He says he has “1 000 doubts about the future” as “I can farm today and have to flee again…”. Instead, like some other returnees, he has started eating his seeds.

“When we gave them food assistance, we saw month after month less malnutrition among the children, but now we can see that they are relapsing,” said Ilunga.

Surviving off scraps
In Kilangwa village, south of Kanyoka, there is already kwashiorkor – a severe form of protein-energy deficiency – among the children as a result of the failure of the bean and maize harvest, according to village chief Jérôme Kyungu Kamana.

People from here were displaced for almost three years because of the Bakata-Katanga. “We experienced food insecurity before fleeing, but the rains added to our suffering,” said Kamana.

Sitting in the shade of a house, a woman is pulping a few dried cassava roots from which she will extract a little bit of flour. Next to her a saucepan contains the brown and white flour she got from processing the far less nutritious cassava peel. “This is what is usually given to animals but they now have to eat this,” said Ilunga.

Emerance Mukendwa says that she and other villagers can go “whole days without eating fufu”, the traditional starchy porridge made from cassava or maize flour. “With the small money we have, we can only afford cassava peel.”

In spite of everything, Mukendwa is not ready to move again. “The situation is the same everywhere. Leaving for another place, where you’re a stranger, is very hard. So I prefer staying and suffering here.”

Reporting by Habibou Bangré for IRIN News and reproduced with permission.