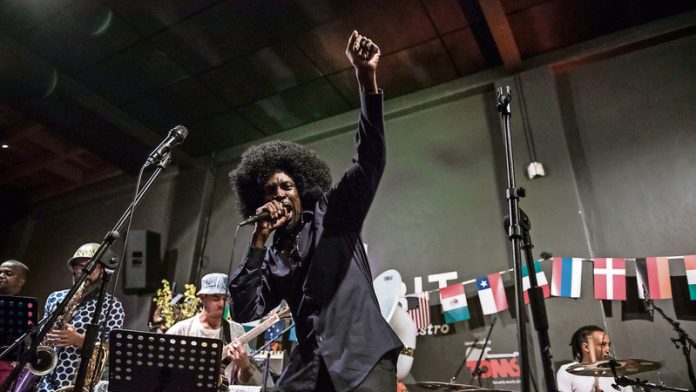 From the minute Bombshelter Beast enters The Orbit from their dressing room stage left, they are belting out a spirited tune.

The audience turns its heads to see where the music is coming from. The band, a colourful army, is dressed to the nines. From my spot on the wooden floor of the Jo’burg jazz club, all I can see are brightly coloured cycling shirts, sleeping shorts, polka-dotted onesies, graffitied army helmets, a pair of lederhosen, a priest’s outfit, cowboy hats and a black-rubber ­carpentry face mask.

The band takes to the stage one at a time, still playing their opening tune.

Behind them, flags of the world – likely relics from the 2010 World Cup – are draped across the wall.

The tables and chairs have been pushed back; this is clearly not a night to be sedately sipping fine wine. This is a night for fun and revelry, a night for dancing.

The on-point rhythm section holds this ragtag army together, with drummer Justin Badenhorst laying down the beat for them to march behind. Vocalists switch almost every song; one minute “Pule” is laying down a rhyme for you, next minute a young poet whose name I didn’t catch is reading from a book.

A little later, Pitch Black Afro is bounding up and down the stage in fine flow. Next, an opera singer in a yellow dress and matching yellow dishwashing gloves has the audience eating out of her hands.

The crowd whoops and shrieks with delight. You can’t turn your eyes from the stage, even for a second, because you might miss something great.

At this gig, I was once again reminded about the ability of music to heal the spirit and mind.

Times are tough in South Africa and the economy, the politics, the inequality and the injustice can get you down. But I was jolted out of my funk by this riot of a band.

You will recognise many of the band members’ names from their appearances in other bands at other gigs. But this gig is not about individuals, it’s about collective action; a gypsy family of maverick musicians, celebrating big-band dancing tunes.

And while they bashed out a weird brew of old-school kwaito, hip-hop, house and ska, fused with a Balkan tinge and big-band jazz feel, I was fantasising about headlines for this article, something along the lines of: “Last night an Afrobalkan Skadubhall band saved my life.”

“It’s fun man,” says Marcus Wyatt beaming at me from across a Melville coffee table. “I have been doing the jazz thing for a long time and we all just take ourselves a bit too seriously.”

Wyatt has made a name for himself in the jazz world through a string of critically lauded and much loved albums, and as a member of Voice, The Prisoners of Strange, Language 12 and the Blue Notes Tribute Orchestra.

“This project is a nice escape from all of that and it’s amazing how people are responding to this band,” he says. “People are ­loving it. Even the musicians: there are guys who wouldn’t normally fancy dress, but you should see what they wear to the gigs. The brief is that we’re a gypsy family and every gig is a reunion.”

Wyatt explains how this most unlikely band came together: “I did a soundtrack for a film called Taka Takata in 2010. A silly comedy about football, about a really bad team that plays in a parking-lot league.”

The film apparently features comedians Kagiso Lediga and Trevor Noah but has not been released yet.

“They asked me to write some music that had a Balkan sound and so I wrote all this music and got Pitch Black Afro to rap over the top of some of the music. Some of it had an old-school kwaito feel, some had a hip-hop feel, a few with an old-school-house sound. I’ve been waiting for the film to come out, and so I just sat on this music.”

Then The Orbit had some regular slots open up and one of them was the first Tuesday of every month.

“I said I’ll bring something,” says Wyatt. “Then I started thinking, who is going to be in this band?”

Drummer Badenhorst “plays this old-school kwaito and house, and it sounds exactly like an old drum box”.

On electric and upright bass is Romy Brauteseth, a regular colleague of Wyatt’s from his jazz gigs.

Then there is Alex Hitserof, the man with the “largest strap-on” (his bass trombone) and the wild Al “Dirt” du Toit on various electric and acoustic guitars, and banjo.

On piano accordion and trombone, is Speedy Kobak, a “mad Polish guy who escaped communism and has been here for 35 years”, says Wyatt. “He is the guy who is irreplaceable in this band and he wears lederhosen and shit.”

“The music is very danceable, but there are a lot of layers to it,” says Wyatt. “I can’t wait to do it on a big PA system in front of a couple thousand people. They are going to lose their shit.”

I remind Wyatt that he will have just that opportunity when Bombshelter Beast play the Bushfire Music Festival in Swaziland at the end of May.

The festival is celebrating its 10-year anniversary and the crowd will be primed.

Nietzsche once mused: “Without music life would be a mistake.” It was during moments like the Bombshelter Beast gig, where I have to agree. But perhaps it was Bob Marley who said it best: “One good thing about music, when it hits you feel no pain.”