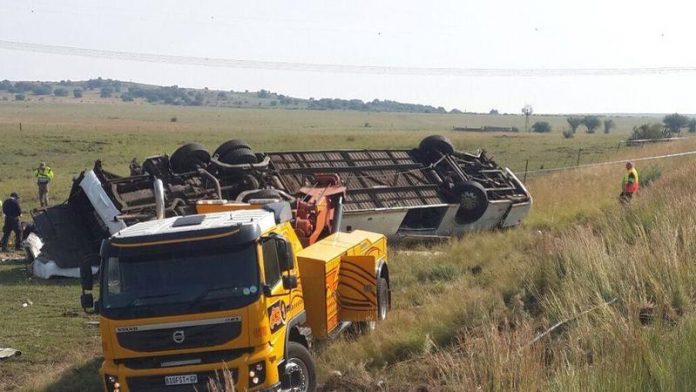 Transport Minister Dipuo Peters joined others on Sunday expressing shock at the accident in which 11 African National Congress volunteers died and 59 were injured when the bus they were travelling in left the road and rolled several times on the N1 between Ventersburg and Winburg in the Free State on Sunday morning.

The bus was carrying ANC volunteers home to Ekurhuleni in Gauteng after they had attended the launch of the ANC’s August 3 local government elections manifesto in Port Elizabeth on Saturday.

In a statement, Peters extended condolences to the families, friends, and the “entire African National Congress family, in particular the ANC Ekurhuleni region, Grace Flathela Zone, for the loss of volunteers” involved in a the bus accident. She wished those admitted to hospital a speedy recovery.

In another statement, SA National Civic Organisation (Sanco) national spokesman Jabu Mahlangu conveyed Sanco’s condolences to the families of those who died and wished those injured a speedy recovery.

“Our thoughts and prayers are with them in their sorrow. We share their grief as well as the loss of the ANC in Ekurhuleni. We need to draw deep to deal with the tragic deaths of the volunteers who were critical foot soldiers and campaigners for the local government election campaign,” he said.

“There is no way to describe how I feel right now. These comrades were with us yesterday [Saturday] as we launched our manifesto and today [Sunday] they are no more. May their souls rest in peace. The loss of one life is a disaster enough. This is a devastation,” Gungubele said in a statement.

He extended condolences to the families of the dead and wished the survivors a speedy recovery.

“This is indeed a sad day for all the structures of the ANC and the community of Ekurhuleni. Our heartfelt condolences go out to families of the deceased and those injured,” the league said in a statement.

National spokesman Refiloe Nt’sekhe extended the party’s heartfelt condolences to the families, friends, and loved ones of those who died in the crash.

“We would also like to extend our prayers to those injured and wish them a speedy recovery, as well as to the ANC during this difficult time. We encourage the SA Police Service to investigate the matter speedily in order to ensure closure for the families of those who lost their lives,” Nt’sekhe said.

A statement from John Moodey, DA Gauteng provincial leader, said: “The DA would like to express its heartfelt condolences to the families and loved ones of the ANC members who tragically lost their lives returning from Port Elizabeth over the weekend. We also wish all those who sustained injury a speedy recovery”.

The DA added: “Our thoughts and prayers are with all concerned during this difficult period”.– African News Agency (ANA)