Review: The People versus the Rainbow Nation 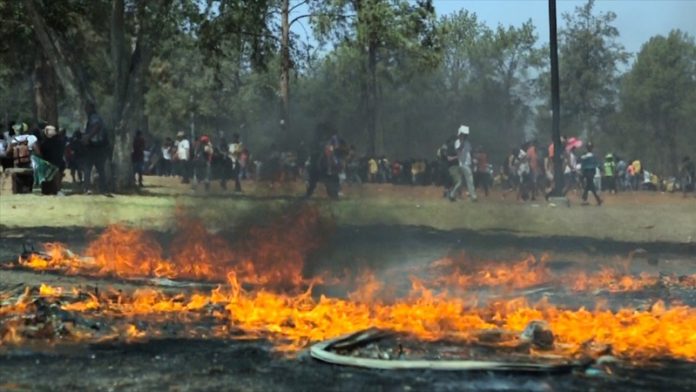 There are moments in the beginning of The People versus the Rainbow Nation where you brace yourself for an up-to-date report from the frontlines of the student movement.

It is probably the shots of the burning lawns of the Union Building that set up that expectation. Or perhaps the clips of toyi-toying students? Maybe even the footage of Cecil John Rhodes being muzzled with paper as his likeness is being carted off from the University of Cape Town campus?

Then there are points where the film is overrun with talking heads a little too soon in the story, whereafter we trail students from campuses such as University of Pretoria, Wits, Stellenbosch and UCT.

To use the old cliché, The People versus the Rainbow Nation is a rollercoaster ride. But instead of pulling you in from the brink, it is one that you are safely observing as a spectator from the outside. You will not be moved to tears in the way that Luister might move you.

The film was directed by Lebogang Rasethaba (Future Sounds of Mzansi, Prisoner 46764: The Untold Legacy of Andrew Mlangeni), produced by Alison Swank (Rasethaba’s colleague at commercial film company Arcade Content) and commissioned by MTV and MTV Base. It therefore straddles the divide between commerce and the political awakening that is taking hold among the country’s student generation.

As the product of an entertainment channel like MTV, the film does not have a political ‘soul’ of its own. Instead, it attempts to synthesise a variety of disparate voices into a cohesive whole.

However, MTV/ MTV Base is an important vehicle to screen this kind of rhetoric , lest it stay swirling in the same cesspool of the ”woke”.

Also, the teams involved in the film do a decent job of condensing the “academese” into MTV-palatable speak in an hour. But it’s a tall order.

Considering that, for many students, the realities of campus life present the first moments of political awareness, there are a lot of half-formed theories being bandied about and vulnerable solidarities being formed.

It’s a beautiful moment to watch Richard Moremi, a soccer-playing student attending the University of Pretoria, struggle to let the term “white” loose from his lips as he reframes his peers’ collective struggle not only in class, but in racial terms.

It is encouraging also to witness Adrian van Wyk move further away from what he terms as “coloured complacency” and begin reckoning with a black identity forged out of necessity.

The other upshot to having this cacophony of voices is that, if nothing else, it is a conversation starter. In the screening I attended, you could hear the fingersnaps, the gasps of exasperation and the handclaps of agreement rise from the audience.

Another pro to this is that the wheat eventually separates itself from the chaff. Those not adding much impetus to the racism debate and the decolonialisation project soon fall flat on screen.

In contrast, the words of those people really charting new ways of understanding blackness and intersectionality linger long after the credits roll.

Writer and activist Lindokuhle Nkosi accounts for a chunk of these moments of transcendence. In talking about her fatigue in responding to racism, she states that she has started looking at “black love as revolutionary theory” because “how will we take down whiteness if we don’t love ourselves?”

Most of all, what The People versus the Rainbow Nation shows is that it is the students who have to articulate this movement for themselves, not sympathisers and especially not well-meaning academics. In the words of white rapper Sam Turpin, the whites must  “take an L (a loss) and realise we can’t always be the father figure.”

Young whites, too, must realise what it means to be an ally to their black compatriots in this struggle. In most cases, it means disappearing from view while contributing selflessly to support black students in their aims.

While The People versus The Rainbow Nation probably serves the interests of MTV/ MTV Base more than it does the students’, it does leave one feeling that the grown folks, with their misplaced #ZumaMustFall hysteria, need more help than their children do.

Most importantly, it leaves us asking: who will make the historical film on contemporary student struggles that does not feed into the novelty of middle-class kids taking a stand?

The People versus The Rainbow Nation premieres tomorrow 21h15 (CAT) on MTV and 27 April on MTV Base 12 noon (CAT).