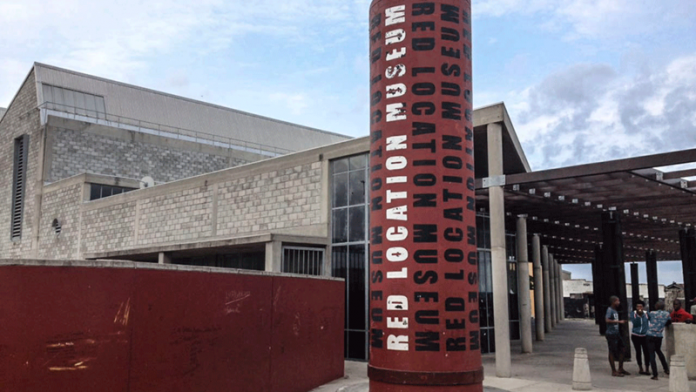 Children have invaded the precincts of New Brighton’s prize-winning Red Location Museum near Port Elizabeth, which is now dilapidated and deserted of the tourists it should have attracted on a Sunday afternoon.

Young children from the small, shoddy homes in the precinct are playing skipping and sports games on the paved areas, and older children hang out next to the graffiti-adorned wall of the gallery.

A mosaic depicting freedom fighters is missing a chunk; bits of rubble and rubbish litter the premises.

On the closed glass door is a notice warning visitors not to step into the premises without the presence of the Red Location steering committee chairperson. “We are not liable for whatever happens to a person that enters,” the note ominously warns, without giving any contact names or numbers.

Protests over housing in October 2013 closed the museum and the library and gallery next to it, and Red Location leaders have held these hostage ever since. Their demands include fixing the shoddily built houses in Red Location, most of which have been declared structurally unsound.

More than 200 homeowners agreed that their 15-year-old defective homes could be demolished and rebuilt, but many are demanding that this be done to the 48m2 original size, and not the new 40m2 government standard size. Another snag is homes that have been altered do not qualify for rebuilding.

There were also issues about the museum employing local residents.

Officials mum on efforts
Museum staff and Nelson Mandela Bay Metropolitan Municipality officials have been careful not to speak out about efforts to reopen the museum for fear of offending Red Location’s leaders.

The metro has imposed a media blackout of sorts for fear of the process moving back to square one, ahead of embarking on renewed efforts in the next two weeks to resolve the impasse.

The acting assistant museum director, Chris du Preez, whose number is on a notice on the museum door apologising to visitors for the inconvenience, referred queries to arts and culture director Veliswa Gwintsa, who in turn referred queries to metro spokesperson Mthubanzi Mniki, who said that the municipality is working with Red Location leaders to resolve the issues amicably. The process is still “unfolding” so there is nothing further to say, Mniki added.

Nelson Mandela Bay deputy mayor Bicks Ndoni, who has been tasked with the negotiations, said in January that letters would be sent to the 288 beneficiaries, who have to state individually in writing whether they wanted their homes demolished and rebuilt to the new specifications.

When the homes were originally built, there were no proper monitoring mechanisms.

“It’s really bad because when trains pass here, the walls shake,” Ndoni told the Herald. The metro could not twist the policy because it would upset the other residents, he said.

Changes in leadership and divisions in the steering committee indicate that the residents themselves aren’t agreed on the course of action.

From awards to vandalism
The museum, which was opened in 2006, cost R22-million to build and the municipality is still spending a reported R300 000 on operating costs every month.

An additional R21-million was budgeted in the past financial year for the museum, should it reopen.

Even though the windows at the front of the museum are unbroken and the insides and furniture remain intact, there has been vandalism. Looters have stolen wiring, power sockets, fencing, air-conditioners and palisade fencing.

In December, one of the security guards tasked by the metro to look after the building was shot dead in front of the museum. The man’s colleagues now shelter inside the buildings they protect. “We couldn’t see who did it. When we came out we just found him dead, with nobody else around,” said a security guard, who was on duty at the time.

The museum, located in the same neighbourhood where the first Umkhonto weSizwe cell was established, has won several architectural awards. It also houses various memory boxes containing the stories of those who struggled against the apartheid regime, but residents have accused the metro of “building a house for dead people” while they have to live in squalor.

The township of New Brighton also saw the first arrest in the Defiance Campaign against the pass laws in the 1950s.

DA says ANC infighting to blame
Democratic Alliance federal chairperson and metro mayoral candidate Athol Trollip claimed the standoff between the metro and the local leaders was related to the ANC’s infighting in the metro. He said the DA would negotiate with individual home owners to resolve the problem because some were happy to accept the 40m2 homes whereas others had different demands.

“There is an impasse and it’s an absolute disgrace that this could hold the Red Location Museum to ransom,” he said.

Trollip said the sooner the museum could attract tourists again, the sooner more employment opportunities would be created and economic growth in the area boosted.

Red Location community leader Mxolisi Nduvane told the Herald last year that the building of three “show homes” did not mean the museum would be allowed to reopen soon.

He said residents did not torch the historic site to get the municipality’s attention, but chose to close it instead.

Nduvane could not be reached for comment this week.