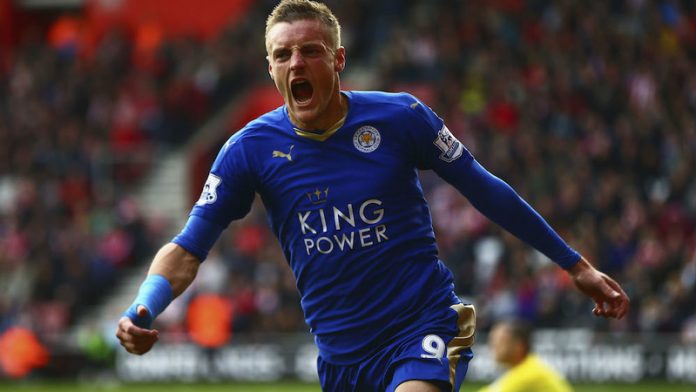 After the tears of joy, the furrowed and fawning editorials, welcome to the final act in the title shock to end all title shocks. Leicester City: the choke. It probably won’t happen, of course. Leicester City of the unbursting bubble remain five points clear in the Premier League with four games left, still playing with enough heart and craft to rescue games late on, as they did amid the furies of Sunday afternoon.

Then again, nobody ever vaulted an improbably outsized hurdle without a little intake of breath at some point. If the past few weeks of Leicester’s title procession have been eerily serene, the past week has at least altered the currents a little. Two things have become clear. First, Tottenham Hotspur are the best team in the country right now, four crushing wins in five culminating in the relentless verve and power of the 4-0 defeat of Stoke City on Monday night.

Second, and most significant, Jamie Vardy is finally going to miss a Premier League match, having started not just every game this season, but all 45 since the draw against Hull City in March 2015 that signalled the moment Leicester first began to turn into Leicester.

Vardy’s ban for his two yellow cards against West Ham United may end up being extended following the Football Association charge for expressing himself vigorously in the direction of referee Jon Moss. For Leicester it is a first genuine bump in the road. Rather than simply allowing the machine to tick over, Claudio Ranieri must now make choices. And nobody, not even Ranieri, really knows what a title?chasing Leicester looks like without Vardy in it, if only because the magic ingredient has been there throughout its entire thrillingly brief existence.

The most pessimistic scenario here suggests Leicester’s beautifully settled first XI has spent the past two months in a kind of Wile E Coyote phase, legs whirling furiously out beyond the edge of the cliff face, just waiting for that moment when they look down and abruptly plummet into the chasm below. Of course, it probably won’t happen. But it could. And if it does, Leicester City: anatomy of a choke will start with the loss of their most vital player.

At this point it is worth noting that the idea it is discourteous or patronising to suggest Leicester will drop points is in itself based on a fallacy. Would we say the same about Manchester City or Chelsea in the same position? Well, yes. This is exactly what happens in title run-ins. Check out the stats: in the past five years, eight of 10 top-two Premier League teams coming into the last four games have dropped five points or more before the end of the season. Only Manchester City, both times they won the title, have blocked out the season with four successive wins.

Stats can be misleading. Twice the teams dropping points had all but won the league, while just because this has happened before is no guide to it happening again. Still, though, the end of the season clearly does have its own wearying effects, and it would be foolish to assume Leicester will buck the trend entirely.

The loss of Vardy is the most obvious trigger. There are two points here. First, any team would miss him right now. It is still a little startling what an excellent player Vardy has become, not to mention an unusual one, a combination of counterattacking precision and high?pressure hustle, a finisher and all?round rapier who uses his speed equally as a defensive weapon.

There are few obvious precedents in English football outside the more muscular, back-to-goal types. Ivica Olic of Croatia has a similar energy. The wonderful, hugely successful Daniele Massaro of Milan was another pacy ball of hustle with a no-frills pedigree. Ian Rush was thin, massively hard?working, and prolific over a much longer period.

Before the internet hate campaign begins, Vardy is no Rush. This may or may not simply be a pact-with-the?devil run of form. But right now he is a supremely effective Premier League player, the first Englishman since Alan Shearer to score against Germany and Holland in quick succession, scorer of 22 of Leicester’s 59 league goals, and the most obvious key to the title endgame.

Leicester have won regularly this season when Vardy hasn’t scored. But his presence is so much mor than goals and assists.

This winning Leicester is a Vardy-coloured entity, a machine that thrums along happily in low gear behind his whizzing, whirring surges, a player of such prodigious movement he makes the whole system work, forcing other teams to be wary always of those scalding counterattacks, giving his team-mates the confidence to sit back, the type of menace that stops fullbacks overcommitting and keeps central midfields on their heels.

The last game Vardy did not start, the FA Cup defeat against Spurs in January, Leicester were easily beaten, the rhythm of the team disrupted. Best of all, Vardy has been a decisive presence in the past five games, even as the season closes in and others have begun to paddle a little.

Ranieri can find that fast-breaking speed elsewhere. Marc Albrighton and Jeff Schlupp are flyers on the flanks. Shinji Okazaki and Leonardo Ulloa have good qualities. But they also have nine goals in 58 appearances combined this season and with Vardy absent both are diminished, from scuttling wingman/wily counterpoint to a distinctly mid?range attack.

Moments of crisis often arrive towards the end of title races. Suddenly that Vardy-less Swansea game on Sunday looks key: an obstacle to be triumphantly vaulted, or otherwise chief candidate to become Leicester’s Sunderland at home (see: Chelsea 2013?14) or Wigan away (Manchester United 2011?12).

Who knows, a stumble before the line might just be good for the wider story too. Probably it would be best if Leicester did splutter their way over the line, if only as a reminder, in among the ceaseless goodwill, that this is not a fairytale or a suspension of the normal rules of physics.

Leicester are a very good, well?grooved team playing with craft and ruthless will. Tugging, niggling, tackling hard: these are all part of the game plan, and one part of the lessons of their success, the basic virtues of team?building, spirit, organisation.

Either way the next few games, starting with Swansea City at the King Power Stadium on Sunday, will be new territory for everyone, not least these Vardy-less, Vardy-coloured league leaders. – © Guardian News & Media 2016