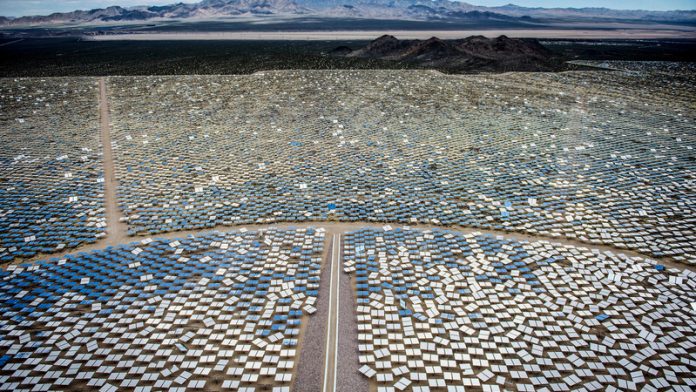 Our sun is caught up in a continual frenzy of nuclear reactions, fusing hydrogen into helium. That produces a stupendous amount of energy, which then flows into space.

Some of that makes it through the Earth’s atmosphere. People get tanned. Plants photosynthesise. The energy drives all manner of life. But, until recently, humanity has been decidedly poor at harnessing it.

About 95% of solar panels are made from silicon. Making them requires a big energy input and the process requires a great deal of industrial precision. It cannot be easily replicated.  All of this has meant that solar energy has been a small player in the sector. In 1980, there were practically no solar plants in the world. In 2007, solar plants provided 12 000 megawatts (MW) of capacity globally. By 2010, this amount was 40 000MW. Last year, it nudged up to 230 000MW. That’s half as much as wind energy, but it still makes up 1% of global electricity supply.

This success has seen a drop in the price of electricity from solar panels. In 2011, solar companies bidding in South Africa’s Renewable Energy Independent Power Producer Procurement Programme offered to supply electricity at R3.44 a kilowatt-hour (kWh). By last year, companies were bidding to produce electricity at 85c/kWh. The government of Dubai signed a deal last month for a 800MW solar farm, providing electricity at 44c/kWh.

That price reduction has come about from the sheer scale of global solar growth. More production means more plants and lower production prices. But it has also meant more money for research into innovative solar technologies. That tinkering is happening all over the world, and at some local universities.  The 8 000MW of solar planned for South Africa is already online. Some of these are giants, such as the 94MW Sishen solar energy facility, which can provide power for about 30 000 homes.

Turning to nature
Humanity has constantly attempted to transcend nature in its technology. But in recent years this trend has slowed down (it turns out nature is pretty good at the basics). Mimicking nature is now the way forward.  A team at Harvard University has come up with a bionic leaf. This is based on a plant’s photosynthesis and splits sunlight into hydrogen and oxygen. So far, they have been able to turn 1% of the sun’s energy into a liquid fuel, isopropanol.

Swaying solar panels
Forests make people happy and make cities liveable. Solar farms take up a lot of space and are visually overwhelming. Researchers in Finland are getting around the problem by studying forests and then growing forests using 3D printers. These use old-fashioned wood for their trunks and make tiny solar panels as their leaves. The process is still inefficient and it cannot replace real trees, given that they produce oxygen, but it is allowing solar technology to blend into the landscape.

Tweaking existing panels
About 95% of all solar panels are based on basic technology: sunlight comes in and excites atoms. These generates heat. The glass panels doing this are built from silicon, which is an expensive and highly technical process. But materials with a crystalline structure, perovskites, are being mixed with silicon cells to improve their efficiency. This means panels can capture 6% more energy from the sun. Perovskites are also much cheaper to make.

Shiny infiltration
Glass buildings are in. These allow depressed workers to look out across the road at their peers. But that glass is wasted space.

In the United States some office blocks use coloured solar panels in place of glass. These are a combination of silicon dioxide, which is used to make normal windows, and titanium dioxide, which absorbs the sun’s rays. That means buildings can start generating their own electricity.

But the technology is still in its infancy. Black windows convert just 9% of the sun’s energy into electricity. Blue window panels convert only 6%.

The most important thing, however, is that, when things look cool, people tend to adopt them. That will further drive the technology.

Spray-on solar cells
In an imagined future, everything people build will be wrapped in solar-receptive cells. Power plants would be a thing of the past because every building would generate its own power.

Researchers at the University of Toronto are bringing that future closer. Light-sensitive dots, sprayed on to a flexible film, are being wrapped around structures at the university to generate electricity. Similar projects at other institutions are turning out paint that can be sprayed on to any structure to start absorbing energy.

Floating solar farms
For many countries, solar farms take up too much space to be feasible. Large-scale solar is a luxury reserved for countries with endless tracts of open space. Not everyone has a Northern Cape at hand. Floating solar plants are an alternative to this. Brazil is building a 350MW plant on a lake in the Amazon. The Indian government is building several plants like this.

The large-scale game-changer
The critical failing with solar is in how intermittently it supplies electricity but concentrating solar photovoltaic plants are changing this. Giant towers, surrounded by fields of solar panels, absorb sunlight and store the energy in salt. One such plant in the Northern Cape can provide electricity for the whole night. The world’s biggest plant, in California, provides nearly 400MW of capacity.

But the plants are still prohibitively expensive to build. Research is therefore going into ways to shrink the towers. Stellenbosch University has built a plant that can be accommodated in a small field. The Helio100 uses 100 panels, clustered around a two-metre high solar tower, which can power a small suburb.

More than 11 800MW of new electricity capacity from independent power producers will come online in 2022, giving Eskom space to do more maintenance on its unreliable infrastructure
Read more
Opinion

COMMENT: The rapid roll-out of small-scale solar power will reduce pressure on the grid and and boost SMME sector
Read more
Advertising