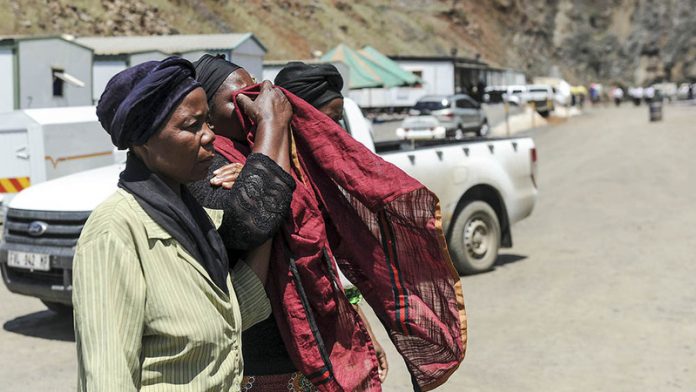 A R4.4-million compensation payout to the families of the Lily Mine employees who died and 75 others who survived an underground collapse hangs in the balance because Vantage Goldfields does not know where it will get the money.

Three surface workers, Pretty Mabuza, Solomon Nyarenda and Yvonne Mnisi, were trapped inside a metal container when an underground pillar collapsed on February 5, sending thousands of tonnes of rock and debris crashing down 800m.

Each of their families was to receive a R200 000 payout. The 75 workers who survived the collapse and were unharmed were each promised R50 000 during a site inspection by Mineral Resources Minister Mosebenzi Zwane.

In February, Lily Mine filed for business rescue and last week workers were urged to apply for voluntary severance packages because the company is unable to pay salaries this month.

Trade union Solidarity has confirmed that the mine hasn’t paid overtime or call-out allowances for the past three months.

It’s understood there is also some discontent in the company over the minister promising the workers compensation money without first consulting the mine.

Business Rescue practitioner Rob Devereaux said 99% of Lily Mine’s creditors voted in favour of his proposed business rescue plan on Wednesday, and this should give the workers some sort of comfort.

“Clearly the company never committed to [the compensation payment] and we have been put into this difficult position; that’s why we have agreed to honour it. No board or director can announce that and make a commitment. We do this as a gesture of goodwill – an expensive one, but be that as it may,” Devereaux said.

It is not known when the workers will receive the money.

“Our understanding is that the compensation money will only be paid once all other payments due to workers have been finalised at the end of the business rescue process. Lily Mine’s wage bill is about R10-million a month, so that’s the first priority,” said Gideon du Plessis, Solidarity’s general secretary.

Devereaux also confirmed that the company’s board is in talks with a new investor, after efforts to secure funding from the Industrial Development Corporation fell through.

“Various investors are looking into [the mine]. We’ve signed confidentiality agreements and we’re in discussions but I’m confident. Lily is a topical subject right now. The mine still has 10 years’ worth of gold underground and is worth being rescued,” he said.

The department of mineral resources said, although it cannot comment on the nearly four-month delay in paying the compensation, it is encouraged by efforts to keep the mine up and running, and is providing support to the deceased workers’ families.

“We support the company’s efforts to secure loans needed to continue trading. The departments of mineral resources and social development are providing families with counselling and other support, which includes food parcels. We’re not giving them money,” said Zwane’s spokesperson, Martin Madlala.

But the families of the workers who died haven’t been able to move on because the bodies of their loved ones remain trapped underground. They’re also uncertain about what the future holds.

“It’s tough. The money is not coming in from the mine. My sister also works for Lily but hasn’t been paid. I don’t know what we’re going to do next because they [the mine] keep promising but nothing happens,” said Nyarenda’s brother, Kennedy.

“I’m also unemployed and can’t contribute at home. The first priority is to get their bodies out from underground because we want to bury Solomon and find closure,” he added.