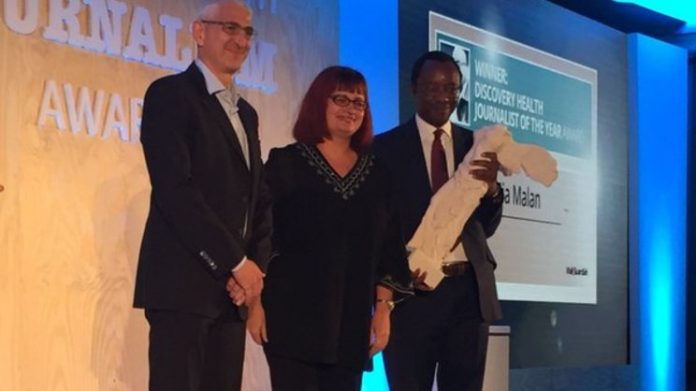 The Mail & Guardian’s health editor, Mia Malan, was named the Discovery Health Journalist of the Year on Wednesday. Malan, who heads up the newspaper’s health unit, Bhekisisa, also won this award in 2013.

Malan won for a long-form feature on the Banting diet and a story on fetal alcohol spectrum disorder. These articles won the health lifestyle and consumer/feature writing categories respectively. Malan was also a finalist in the comment and analysis category for a piece on HIV-related stigma.

The judges described Malan’s work as a “perfect example of excellence in journalism, of good writing, rich information, and of making analytical reporting accessible to audiences”. “Her grasp of science and her ability to communicate complex issues are simply superb,” they said.

Bhekisisa health writer Amy Green was a finalist in the Discovery Foundation National Building category for a feature on antiretroviral clubs in Cape Town that encourage people with HIV to take their medicine correctly.

Bhekisisa’s journalists have won more than twenty journalism awards since its launch in February 2013. The unit expanded its activities to the rest of Africa this year.

“I’m exceptionally proud of this unit and its vision for health reporting in Africa,” said M&G editor-in-chief Verashni Pillay. “Bhekisisa has shown us that health stories can be mainstream stories, have impact and improve the quality of a newspaper in general.”

Bhekisisa is funded by the Bill and Melinda Gates Foundation and the German government.

How rare is very rare? Your questions about blood clots – answered