Inside the plot to hijack ‘Please Call Me’ billions 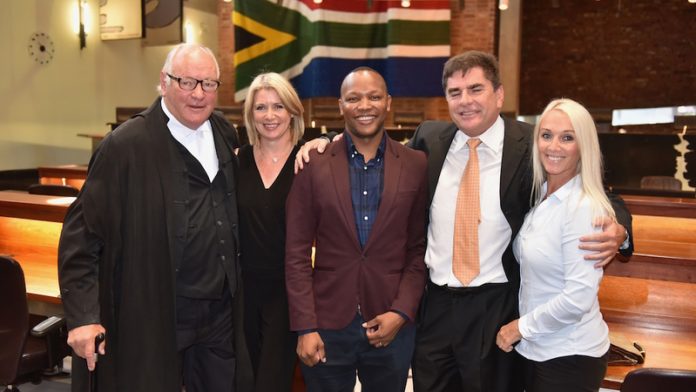 Heralded as the ultimate victory of the little guy over a giant corporate, Kenneth Makate’s “Please Call Me” case has disintegrated into a nasty clash between lawyers and the investors who financed his case.

Barely six weeks after winning his case in the Constitutional Court, Makate is again embroiled in a bitter court battle as his backers go to war over a slice of the estimated multibillion-rand settlement due to him.

On Thursday, Raining Men Trade, the company nominated to enter into the contract with Makate, filed papers for an urgent interdict to block Vodacom from paying Makate a cent. Alternatively, the company wants Vodacom to pay him no more than 50% of whatever amount is agreed to during the current settlement negotiations until it is reinstated and included in the settlement discussions.

The directors of Raining Men Trade claim it was appointed as the legally nominated firm for the contract with Makate – and that this was done in line with  his initial deal with the litigation-funding firm Sterling Rand, which picked up his case in 2013.

At the heart of this new legal battle are Raining Men Trade’s claims that its own law firm, Stemela & Lubbe Inc, tried to hijack the deal by coercing Makate into cancelling his funding contract with them.

Raining Men Trade and Chris Schoeman secured several investors to raise cash for the “Please Call Me” case. Investors were each allocated between 4% and 5% of the final settlement and also carried the entire risk in the event that Makate lost the case.

Schoeman, in an affidavit submitted for the urgent application, detailed how he had originally raised funding and how Raining Men Trade had put together a legal team headed by attorney Wilna Lubbe to handle Makate’s case.

In the event that Makate won his case, the former Vodacom employee was due 60% of the settlement and the various investors, through Raining Men Trade, 40%. Their respective stakes were later slightly reduced to cover additional investors as the case dragged on.

But Schoeman has now accused Lubbe of conspiring with another law firm to oust his company by creating a false cancellation agreement in a bid to get rid of two other investors.

The ‘conspiracy’
Schoeman claims that Lubbe implemented a “grand scheme” in 2014 by telling Makate that the funders were not paying the lawyers’ bills and that he could become liable for the costs as a result.

“Quite obviously this had a very negative impact on Makate and he agreed … to support the cancellation of the funding agreement.”

Schoeman now claims there was no truth to the nonpayment claims. He says Lubbe made the allegations only when his fellow funders and the directors of Raining Men Trade, Errol Elsdon and Tracey Roscher, demanded a breakdown of her bills.

Lubbe apparently labelled some of the investors as “nothing less than leeches”, whereas advocate Cedric Puckrin SC, whom they had hired as part of Makate’s legal team, wanted Elsdon and Roscher “out of the picture”, Schoeman claims.

Schoeman maintains he went along with the “plot” for a while because Lubbe had promised to “look after” him. He says he later realised that he was nothing “but a pawn” in the scheme.

At the risk of losing everything, Schoeman says he came clean and switched sides. He now alleges how Lubbe then personally took Makate to see another attorney, Victor Craig Williams – whom he describes as “a puppet” who would not do anything without Lubbe’s instructions, according to the affidavit.

Schoeman said he attended a meeting during which Williams conceded that he was “not actually a real attorney, but rather an engineer” and had never previously cancelled a commercial agreement.

Schoeman, thanks to his previous experience practising law, admitted he had helped Williams to draft several documents, including a “false” letter of demand for outstanding money from Raining Men Trade.

This, he said, was then sent through to Williams to be posted on the new law firm’s letterhead.

“The whole cancellation is a sham, conceived and orchestrated by Lubbe and executed by me. I was ably abetted by Williams and Makate was fully in the picture and a participant.

“I am not proud of this. It represents one of the lowest points in my life. Effectively, I drafted my own letter of demand despite the fact that I knew it was false.

“In fact, during the course of the cancellation process I drafted a number of letters to myself which I provided to Williams.”

Williams, who declined to comment, is a practising attorney.

Strange bills
During the course of litigation, Lubbe purchased a textbook on contract law in South Africa. Not only did she bill Raining Men Trade for this book, she also allegedly inflated the purchase price by some 300% to more than R3 000.

Yet Lubbe also charged them R8 000 for consulting with their advocates one one of those days, August 1. He maintains she also slapped them with her hourly rates of R2 000 for photocopies.

On Thursday, Lubbe said she was aware of the interdict application and dismissed every allegation against her as “totally untrue”.

She said her firm was in the process of drafting opposing affidavits and added: “This is something a court will have to preside over.”

What now for Makate?
Makate secured a sensational victory on April 26 when the Constitutional Court agreed that Vodacom owed him for his role in coming up with the highly successful callback facility.

The judgment was scathing of Vodacom and particularly the claim by its former chief executive, Alan Knott-Craig, to have been the true inventor of this money-spinning service, which was launched in 2001.

The court ordered the company to negotiate a settlement with Makate within 30 days.

In this current court case, Raining Men Trade contends that its application would not prejudice Makate in any way, because it only seeks to have the portion due to the funders withheld pending the outcome of its case against the various lawyers.

Makate declined to comment, but Vodacom confirmed that settlement talks have started without Raining Men Trade. Vodacom spokesperson Byron Kennedy said a successful legal challenge by Schoeman and the company may result in the negotiations being stalled.

Pauli van Wyk
Pauli van Wyk is a Scorpio investigative journalist. She writes about the justice cluster, state-owned companies, state politics and the inescapable collision course they're on. Pauli cut her teeth at Media24. She became a journo at Beeld, was trained by the amaBhungane Centre for Investigative Journalism and joined Mail & Guardian's investigative team before becoming a member of Scorpio.
Facebook
Twitter
WhatsApp
Linkedin
Email
Telegram

Many companies have over-capitalised on IT infrastructure in the past, and are looking for ways to access simpler, cheaper technology that cuts their costs
Read more
Opinion

The land has got to belong to all the people of South Africa, and many believe that there’s no other mechanism for that except expropriation
Read more
Advertising