‘A climate of fear’ under Hlaudi Motsoeneng: SABC staff say all have forsaken them 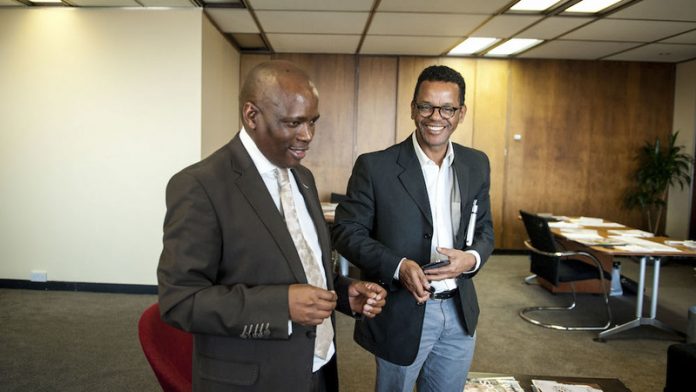 Journalists at the SABC this week took to the streets and social media to protest against management’s interference with news coverage because, their peers say, getting the public on their side is seen as their very last resort.

The public broadcaster teetered on the edge of full-blown rebellion – but seemed to pull back from it – earlier this week after acting chief executive and head of news Jimi Matthews resigned, saying the “prevailing, corrosive atmosphere has impacted negatively on my moral judgment”.

Other SABC managers denied there was any trouble and, after publishing his resignation letter, Matthews remained silent despite being heavily criticised by both the ANC and Communications Minister Faith Muthambi, among others.

The SABC staffers at the centre of the storm said Matthews was just one more individual who had abandoned them, as had all the mechanisms of democracy. “Even if he had his Damascus moment, now that he’s on the outside, why isn’t he using his voice?” asked one staffer.

The same employee said the parliamentary oversight committee that theoretically holds ultimate authority over the SABC “collapsed a long time ago”.

An SABC journalist said even the public protector – who had managed to bring President Jacob Zuma to account for the Nkandla spending – had proved powerless when it came to the SABC.

“Thuli [Madonsela] said Hlaudi [Motsoeneng, chief operating officer] had to go. He’s still here. She can’t stop him. The president can’t stop him. You want us to stand up to him?”

A number of journalists, producers and editors to whom the Mail & Guardian spoke insisted on anonymity, mostly for fear of reprisals. Because they have dependents to support they were not willing to gamble with their livelihoods, one said.

Even as frustrations with the SABC boiled over, those very fears seemed to deny a few openly protesting staff the public support of most of their fellows. “People are operating in a climate of fear,” one said.

Staff have a range of grievances, but all cite as their primary concern Motsoeneng’s usurping of editorial control, sometimes publicly – as with the ban on broadcasting footage of protesters burning public property – and sometimes from behind the scenes.

In previous years there have been attempts to put a lid on portraying the ANC in a poor light on SABC platforms, one said, but editors opposed such moves and eventually won the day. This time, they say, it is different.

“We have a protest right outside our building; we can see it from the window. Then we’re told: ‘No, you must not look at that’, ” said one, referring to an apparent ban on covering a protest centred on Motsoeneng’s editorial decisions.

“Before, there were attempts to steer us but there was never a ban on dissent. Now you say: ‘We must cover that’, and they throw you out the building.”

One staffer said the pressure to portray the country as being in good shape had been increasing noticeably as the local government elections approached.

This mainly applied to the television news division, he said, with slightly less focus on the English-language services that were mostly consumed in urban areas. Vernacular radio stations and others with a more rural reach were in effect free of editorial interference, he added.

‘I owe my loyalty to seven million people’

The Mail & Guardian asked SABC staffers for accounts of events there. A senior editorial staffer sent this letter addressed to colleagues. It has been edited for length and clarity. – Phillip de Wet

In former president Thabo Mbeki’s biography, he famously quotes a poem by Langston Hughes on the dream deferred.

I have thought much about this in recent weeks. The SABC is my home. It is where I cut my teeth as a journalist and learned many valuable lessons. It has sent me into danger zones and tough situations, trusting me to know where to tread and to come back with the truth.

But today, the SABC newsroom has itself become a psychological war zone. A minefield of uncertainty. Of threats. Of buried expectations and “directives” that will blow your head off if you disobey them – even if you did not know they were there. Even if you could not believe it, they were there. Because, at the SABC, nothing is on paper.

If you look at the most recent editorial policy circulated earlier this month, it says nothing about not covering violent protests, gives no quota for international content, makes no mention of the requirement that stations play 90% local music. These supposed decisions are circulated to the media and affirmed verbally by [chief operating officer] Hlaudi Motsoeneng, but nothing – nothing – is on paper.

The broadcaster actually argued before the Independent Communications Authority of South Africa that it is censoring content to protect our economic outlook, maintain political stability and keep our international image polished to protect investor confidence.

But the nation that Hlaudi believes he should be building is burning. And the majority of South Africans don’t know why. Seven million people rely exclusively on the SABC to give them that information. We do not trust them to draw their own conclusions from all possible coverage we are able to give them.

You may ask: If it has come to this, why don’t the good journalists just leave? In my case, because of those seven million. They do not deserve Hlaudi. They deserve much better.

Maybe, for some SABC employees, there’s a little bit of Stockholm syndrome in there too. I don’t know.

All I know for certain is that this smells funny, and I’m not going to eat it. I am not going to sit around a table and censor my journalistic thoughts and ideas. I will not sit quietly in national editorial meetings when stories that are of essence to our audience are removed from the diary without any reason given. I will not be part of the crime of defrauding this nation of information in the five weeks we have left before the local elections.

Some SABC veterans will tell you that this too will pass, that things will settle down after the elections.

Tell us your story, securely

The Mail & Guardian, in conjunction with the Freedom of Expression Institute, Media Monitoring Africa and the SOS Coalition, is calling on SABC employees to tell their stories – both good and bad.

Through extensive interviews and informal conversations this week, it became clear that many in the SABC won’t speak publicly for fear of repercussions.

Almost wholly absent from the public discussion about the SABC are the stories of upstanding journalists, who are determined to serve democracy by working in the organisation, and those who remain fiercely loyal to their employer.

It is those stories we wish to hear, as well as stories of managers interfering in editorial decisions and stories of good work done under difficult circumstances. Whistle-blowers are always welcome and proof of malfeasance is important, but so is everyday experience.

To assure anonymity, staffers can use the Afrileaks.org platform to communicate with us.

Afrileaks is a joint project of the African Network of Centres for Investigative Reporting, the Hermes Centre for Transparency and Digital Human Rights.

It uses state-of-the-art means to protect whistle-blowers’ identities not only from those who might be monitoring or intercepting communications but also from the M&G, if necessary. – Phillip de Wet

Yet another deadline for broadcast digital migration