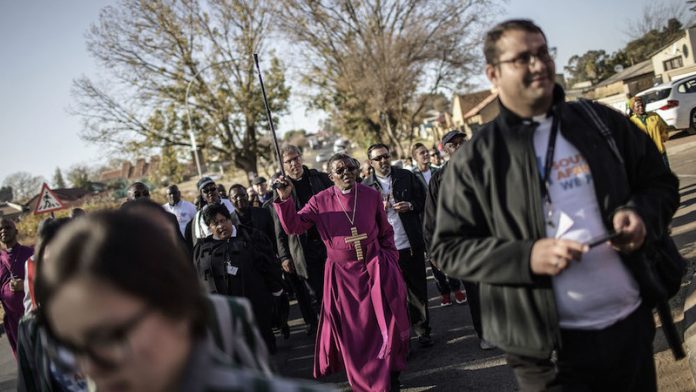 This week André Olivier, the senior pastor of Rivers Church – one of the most popular evangelical churches in Johannesburg – came under fire for comments that were seen as racist.

“We [white people] took nothing from no one. Maybe the law favoured us, but we worked … And when you tell me I need to share my wealth, what are you suggesting? Are you suggesting I give away some of it? Are you giving any of yours away?”

Olivier also said that white people were not “the problem in South Africa. We have contributed to this nation, and we still do.”

His comments, fired from the pulpit of his Sandton-based church, have sparked debates about how Christian churches, specifically multiracial evangelical churches, deal with race and racism.

To theologians such as Pastor Xola Skosana, transformation and Christianity are irreconcilable.

Skosana, lead pastor at Way of Life in Khayelitsha, rose to prominence during the #RhodesMustFall and #FeesMustFall student protests last year. He and his congregation declared solidarity with the students, particularly on the issue of decolonising universities.

“I have given up on the church,” Skosana said. “The God of the Bible has been captured by white power, and continues to be used to maintain whiteness while ignoring black pain and the injustices that caused it.”

It’s an issue that has caused Skosana to grapple with his faith. He believes that black Christians are enslaved by Christianity, and keep believing because of their fear of hell.

“Christianity is the licence of white arrogance. It’s good that [Olivier] talked about his politics on the pulpit – it revealed his white privilege and racism.”

Some evangelical churches are accused of preaching the ‘prosperity gospel’, as evidenced by the statements of Pastor André Olivier. (Supplied)

The leadership of several denominational churches has since transformed racially, as a natural progression of the role these religious leaders played during the struggle.

But many black middle-class people have joined the large congregations of wealthy mega-churches, mostly situated in the suburbs.

Reverend Moss Ntlha, the general secretary of the Evangelical Alliance of South Africa, says that members of the rising black middle class have found spiritual homes in these churches and continue to flock to them, sacrificing “racial ideology” for spirituality.

“Black people go to these multiracial evangelical churches and will continue to do because their personal spiritual needs supersede their racial ideologies. They have done a cost-benefit analysis and their spirituality matters more than their race.”

Ntlha believes that churches need to talk about issues of race and racism.

“The promise of Jesus Christ is that there must be a way that people repent from their sin, but many white Christians do not see this. Black people have also learned to make excuses for racism,” he said.

Ntlha added that, although during the Truth and Reconciliation Commission hearings many churches acknowledged that Christianity had tangibly collaborated with apartheid, the conversation has not evolved.

Elizabeth Peters, executive director of the South African Faith and Family Institute, said Christians of all races must accept that their religion was used and misinterpreted to justify colonialism and apartheid. Olivier’s statements show that he has failed to acknowledge this, she said.

“We have all been trained under the same oppressions of white supremacy and patriarchy, and Christians need to acknowledge this for transformation to begin in churches. Dismantling these [notions] should be our point of entry into a decolonised Christian faith.”

Peters added that the small but growing movement of dissenting voices challenging churches to truly transform needed to be given the platform to redefine Christianity beyond the context of whiteness and patriarchy.

South African Christians are creating “safe spaces” where race and racism can be discussed from a biblical perspective, through forums such as Dialoog and Real Talk that facilitate interracial conversations about race, including a forum last year at which speakers could share their experiences from various racial perspectives.

Real Talk cofounder Thulani Madinginye said Olivier’s sermon has shown the limitations of prioritising the “prosperity gospel” instead of a holistic approach to the Bible. He said the prosperity gospel makes the mistake of dichotomising wealth and poverty.

“It says that being rich is seen as a blessing from God, while poverty means that you are not blessed. This is wrong and short-sighted.”

Madinginye said the scriptures that talk about reparations and justice are severely overlooked in evangelical churches. “However, they are critical in finding solutions to address the legacies of racism,” he said.

Skosana disagrees. “Many Christian leaders such as Archbishop Emeritus Desmond Tutu and Allan Boesak have tried to reconstruct Christianity to address issues of justice and reparations. However, I strongly believe that true justice for black people and Christianity are irreconcilable [with each other].

“Pastor Olivier is no different from [controversial estate agent] Penny Sparrow. This is just a different manifestation of racism.”