Drones open up a new frontier for journalism 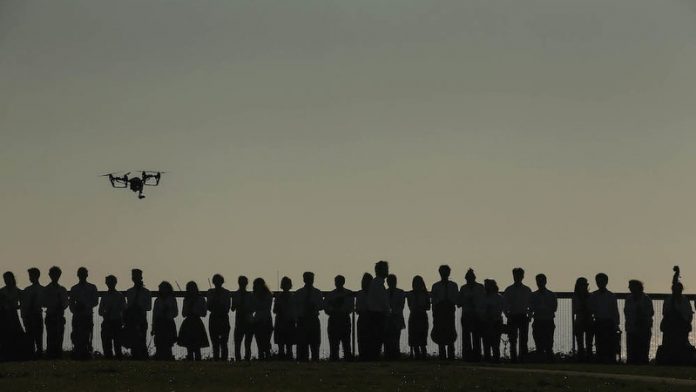 The word “drone” has negative connotations for many people. Some think of deadly drone strikes by the US military, others of amateur snoops invading their privacy. But, like any tool, drones can be a force for good as well as ill. One example is the handful of pioneering journalists who are incorporating drones into their reporting.

The most common and obvious use of drones is to video or photograph large areas of land. Matt Waite, one of the pioneers of drone journalism, founded a drone programme at the University of Nebraska-Lincoln in 2012. Its first project was a report on the extent of the drought ravaging Nebraska’s farmlands.

“Agriculture, media, public infrastructure, examining bridges – there’s so much that drones can do,” Ben Kreimer, another pioneer of drone journalism, told Poynter earlier this year. Kreimer is a fellow at Buzzfeed’s Open Lab for Journalism, Technology, and the Arts.

One of Kreimer’s most evocative projects is an exploration of the notorious Dandora dumpsite on the outskirts of Kenya’s largest city, Nairobi. This enormous landfill, one of the largest in the world, attracts thousands of the city’s poorest inhabitants who scour it for anything of value.

Rather than simply photographing the spectacle of impoverished people digging through trash as so many journalists have already done, Kreimer used drones to capture the vast scale of the dump. He then stitched hundreds of photos into a 3D model of the site, allowing the viewer to explore the entire dump, zooming, rotating and panning in a way that is impossible with traditional photography.

But drones have more to offer than aerial photography and videography. Fitted with sensors, drones can be used to monitor everything from air and noise pollution to traffic congestion, deforestation and rising sea levels. Their small size and maneuverability allows drones to collect large amounts of data quickly and cheaply from areas that are difficult to negotiate at ground level.

In the right hands, drones can also tell surprisingly emotive stories. In April this year Johnny Miller, a professional photographer based in Cape Town (and one of the speakers at Drone Camp Cape Town on July 13-15) began to publish photos of the boundaries between rich and poor areas in South African cities, taken using a drone.

The series, named Unequal Scenes, quickly went viral. It captures the shocking visual contrast between these areas which are often situated right next to one another. The photographs transform a mundane reality, the boundaries between suburbs, into a compelling visual commentary on the stark divide between our richest and poorest citizens.

In January this year, to mark the 70th anniversary of its liberation, the BBC’s drone unit filmed Auschwitz concentration camp from above. It’s a haunting portrait of one of history’s most awful places. The footage puts you inside the scene in a way that’s simply not possible with standard television cameras. The feeling is almost filmic, and it gives you a sense of the vast scale of the camp that traditional reporting simply cannot convey.

The reason any of this is possible is that drone prices have been falling rapidly for the last ten years. At the beginning of the decade even a modest drone would have cost tens of thousands of US dollars. Now a small drone capable of carrying a camera or a sensor array can go for as little as R5 000. Even cash-strapped media houses can afford to experiment when prices are this low.

The biggest barrier to drone journalism is not cost but regulation. The world’s airways are carefully monitored and policed, and for good reason. One recklessly piloted drone could disrupt or disable a much larger aircraft and put the lives of the crew and passengers at risk. Although the overall risk is small, regulators are by definition extremely risk averse.

These fears led many regulators to either ban drones entirely or heavily restrict their use. The situation is particularly dire in South Africa. As of July 2015, any commercial entity operating a drone must comply with Civil Aviation Authority (CAA) regulations.

These regulations are quite onerous but not entirely unreasonable. Ensuring that commercial drone pilots are tested, licensed and that their drones are officially registered is sensible. The problem is that the CAA essentially regulates commercial drone operations in much the same way it regulates airlines and helicopter services.

This means that a 5kg drone worth R30 000 and flying 150 metres above the ground is subject to many of the same restrictions as a R25-million helicopter carrying tourists on flips over Table Mountain.

The CAA is clearly struggling to cope with the sheer volume of applications for commercial drone licenses. According to SafeDrone.co.za 130 people have earned remote pilots licenses (RPLs) since July 2015 but only 7 operating licenses have been issued to drone companies.

This means that at least 120 people have bought drones and spent R20 000 to R30 000 on training but cannot operate their companies because of the backlog of approvals. Hundreds of other people are in the process of earning their RPLs, which means the backlog is only likely to get worse.

“We’re fans of regulation because we want our industry to be safe,” explains Alan Ball of Flying Robot, a local drone retailer, ”But we think there should be different tiers of certification. A guy filming a wedding on a wine farm with a 2kg drone shouldn’t be subject to the same restrictions as someone operating a 20kg drone at high altitudes on a commercial film shoot.”

Ball points to Australia and the USA, where regulators have significantly relaxed restrictions on smaller drones (2kg or less) operated within sensible parameters. As long as they don’t exceed altitudes of 150 metres and remain visible to the operator, regulations are far less onerous.

Whether regulators like it or not, the market for commercial and hobby drones is growing incredibly rapidly. Analysts estimate that it is already worth more than $2-billion per year and that it will reach at least $6-billion by 2020. That will mean more drones at even lower prices. The world’s airways are likely to be very busy, very soon.

We tend to lag the developed world in terms of technology adoption, but this week South African journalists are jumpstarting their own drone projects at a free “Drone Camp” for journalists and civic organisations, hosted by Code For Africa.

At the bootcamp, participants will be shown how to assemble their own drones, how to fly in a simulator, and then how to fly outdoors. Pioneers in drone journalism will be on hand, including Professor Paul Egglestone of the UK’s Media Innovation Studio and Buzzfeed’s Ben Kreimer, as well as experts on South Africa’s current regulations. Qualified drone pilots who are keen to partner with newsrooms and organisations will also be attending.

“There are notable exceptions, but in general South African media has a sad recent history of being late to new developments in the intersection between technology and journalism. We don’t want to repeat this mistake with drone journalism,” says Code for Africa’s Chris Roper, a Senior Fellow at the Knight Foundation and one of the organisers of Drone Camp.

“Drones open up some amazing possibilities for journalism, and not just in terms of telling great stories – in our resource-strapped environment, they open up a whole new way of doing investigative journalism,” explained Roper. “They also introduce new complications into the journalistic process, ethical and practical, and the experts we’ve brought to Drone Camp will address these hazards as well as the opportunities.”

Disclosure: This is part of a series of articles I’m writing at the invitation of Code for Africa. I retain editorial independence and the right to criticise Code for Africa and any of its partners and affiliates.

Further disclosure: The Mail & Guardian is sending one of its own journalists to take part in the Code for Africa Drone Camp