Eddie Ndopu is ready, willing and able to conquer space 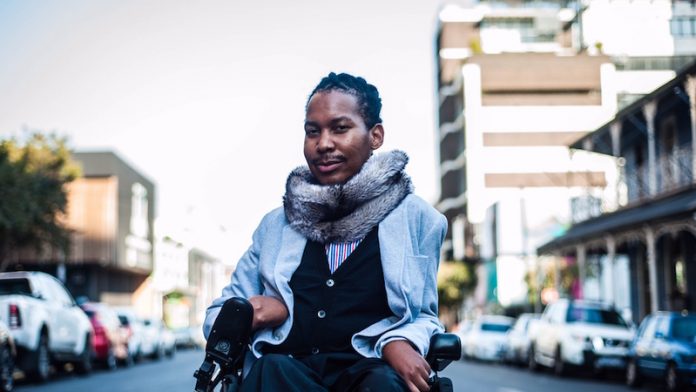 “I know that I am a genius,” says Eddie Ndopu, before he bursts into a self-assured laugh. “I say that with deep humility,” he cheerfully continues.

Most recently, Ndopu was awarded a full scholarship to study at the University of Oxford, where he will read for his masters in public policy.

Ndopu’s undeniable exceptionalism started when he was two years old, when doctors diagnosed him with spinal muscular atrophy and told his mother that he only had five years to live. Spinal muscular atrophy is a disease that causes progressive muscle degeneration and weakness and as a result Ndopu, 24 years after the diagnosis,uses a wheel-chair for mobility. His condition, although a challenge, has never stopped him from fulfilling his fiercest dreams – including going to Oxford in August.

“I am a black, queer, feminist thinker. I move through this world as black, as queer, as disabled – but I also just want to live my best life. I don’t want to live in a world where my identity is visceral at every turn. But I exist in a world that doesn’t care about black people nor queer people – and definitely not people living with disabilities.”

Ndopu is weary of how his life is often framed – especially by the media. He wants a world where that does not exceptionalise him.

“I am exceptionalised because the overwhelming majority of young people with disabilities are denied the opportunity to live their best lives. People want me to be the benchmark for what people with disabilities can achieve, instead of addressing the socio-economic issues that make life difficult for people similar to me. That is unbelievably tragic.”

He applied to Oxford in 2015 while recovering from a surgical procedure. Coupled with anxiety and exhaustion, he did not believe that he would be accepted. When he received the email that he has been accepted and awarded the scholarship, Ndopu spent an hour letting it sink it.

“I didn’t believe it. I thought they made a mistake but then I realised that I am an Oxford student. Now I can confidently flick my hair and own it.”

He describes the pivotal moments as perpetually climbing Mount Everest – he has been able to do things that he didn’t think he would ever do. “I travel. I speak in front of very influential people. My life is amazing.”

As he makes his way down De Beer street in Braamfontein, Johannesburg, with his personal caregiver Tinno Nene faithfully by his side, passersby steal looks and pretend not to be staring at him. Ndopu is unfazed. “I don’t notice the stares as much as Tinno or my friends do. Often it is them who tell me that people are looking.”

Ndopu can already taste the air of Oxford as he talks about all the things he plans on doing during his time there. For him, it is yet another dream come true – but slowly it looks like that Oxford air is being squeezed out of his lungs. Without Nene, his chances of succesfully studying there are exponentially diminished.

Ndopu will be the first African with a disability at the university. The scholarship never considered a disabled recipient in need of an assistant.

“They [Oxford] assumed that I would able-bodied, so they did not account for the 24-hour care I will need. There is no visa category for a caregiver who needs to accompany an international student with a disability because this has never happened at Oxford. There is always a challenge, it does not end. It is exhausting.”

There are many things that stand out about Ndopu – his love for lipstick, his infectious energy, his brilliant mind and his unapologetic stance and ownership of his disability. He is sure of himself in ways that many 25-year-olds aren’t and never will be.

Immediately after graduating from Oxford, Ndopu is planning to travel to 25 countries where he will advise governments across the globe on how to close the access gap for people with disabilities. He calls this his ‘Lemonade moment’ – likening it to the prolific body of work by the same name that Beyoncé recently released.

Ndopu also plans to go to space. Judging by his genius track record, he will. “I am my best work. I would be doing myself a disservice if I did not fulfil the fire burning in my belly.”

People with disabilities can work if barriers go

We fail children living with disabilities