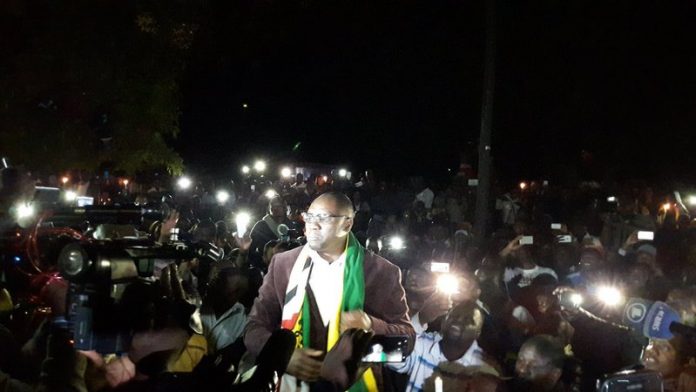 Mawarire briefly addressed the crowd that had gathered in support of the pastor for his Wednesday afternoon court appearance.

Man of the Moment – Pastor Evan Mawarire. What a picture! pic.twitter.com/2eWiz2aWX0

Zimbabwean journalists and citizens tweeted on Wednesday evening that Mawarire was apparently released after the local magistrate ruled that the police had acted unconstitutionally in their arrest of the pastor.

Zimbabwe magistrates releases Pastor Evan Mawarire who made history by drawing the largest crowd and lawyers at a court trial.

Evan Mawarire is Free. Zimbabwe has felt the effects of unity and peace. #ThisFlag

Crowds swelled on Wednesday outside the Harare Magistrates’ Court where they were singing and  praying ahead of Mawarire’s expected bail hearing in the afternoon. In April, the churchman began an online movement to protest government corruption, an import ban and police brutality.

Arrested on Tuesday after a widely-followed strike last week, he was initially charged with inciting public violence. His supporters say he has consistently called for only peaceful protest.

The charge against detained Zimbabwe protest pastor Evan Mawarire was later altered to a much more serious one of “subverting a constitutional government”, according to a spokesperson for the Zimbabwe Lawyers for Human Rights.

Kumbirai Mafunda said in a brief online update: “Zimbabwean authorities have changed/amended charges pressed against Pastor Evan Mawarire to subverting a constitutional government in contravention of Section 22 (2) of the Criminal Law (Codification and Reform) Act.” The charge carries a possible 20 year jail sentence with no option of a fine, according to a copy of the Act seen by News24.

The Zimbabwean preacher leading  anti-government protests said he was ordered to report to the police on Tuesday, stoking tensions on the eve of more demonstrations over the state of the economy.

Pastor Evan has now arrived at Harare Central, in the company of his lawyers. (pics @ThisFlag1980) #ThisFlag pic.twitter.com/Ry0AyoKQaT

Mawarire – who has issued a series of online video statements tapping into mounting public anger over corruption, high unemployment and other economic woes – said no one had told him the reasons for the order.

Mawarire said the police criminal investigations department in Harare had called him on Monday evening, telling him to go to the city’s central station. “I will be going there because we have not broken any law,” he told Reuters.

Police spokesperson Charity Charamba said she had no details about the issue and could not immediately comment.

Mawarire called a one day shut-down last week that closed businesses across the Southern African nation, the  biggest strike action since 2005.

More protests were planned for Wednesday and Thursday as part of his  #ThisFlag movement – a reference to a reflection on the colours of the national flag during one of his talks.

Zimbabweans’s use of the internet in recent weeks to mobilise for street protests has bypassed traditional opposition parties.

Mugabe, Africa’s oldest leader at 92, has led the former British colony since independence in 1980. Mawarire appeared in a Harare court after spending the night in police cells while officers searched his house, church and office in the capital following several days of protests last week.- Reuters.

Note: In terms of section 61(1) of the Constitution of Zimbabwe, every person has the right to freedom of expression, which includes the freedom to seek, receive and communicate ideas and other information. Mawarire has been charged under Section 36 of the Criminal Law (Codification and Reform) Act of Zimbabwe.

Sec 58 of the Zim Const: “Every person has the right to demonstrate & 2 present petitions, but these rights must be exercised peacefully”