The cult of Hlaudi Motsoeneng deepens with confidential deal with predecessor 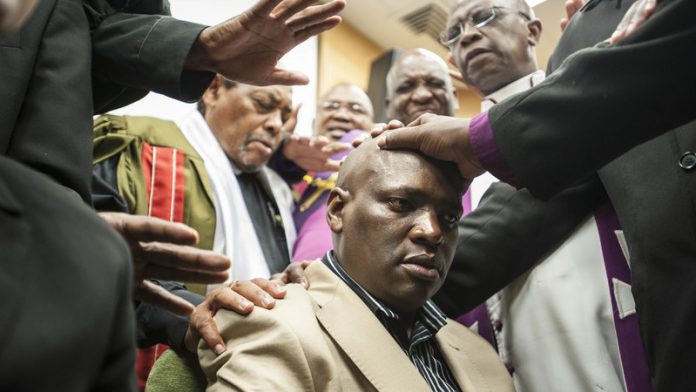 Former SABC chief executive Frans Matlala’s settlement with the public broadcaster this week – reportedly the biggest golden handshake ever paid in the public sector – will bring to a screeching halt an investigation into a dubious deal at the SABC that could have pointed back to chief operating officer Hlaudi Motsoeneng.

Matlala and his legal team would not comment this week on any aspect of the settlement. But the Mail & Guardian has established that the deal includes tough confidentiality clauses that seek to ensure Matlala’s silence.

In return, he will receive a reported R18‑million for less than four months of work or, more accurately, for the remainder of the three-year contract he did not complete after being suspended.

A well-positioned source in the SABC this week said Matlala had been intimately involved in a national treasury investigation into how the SABC came to spend R40-million on a new studio that turned out to be “nothing more than a high-tech desk and monitors”.

The deal in question was struck on Motsoeneng’s watch, in what many described as a period of micromanaging on his part.

Matlala was apparently approached by the treasury for assistance with the probe shortly after he took office. As he started gathering information, he received a letter from the SABC board instructing him not to co-operate with the treasury without the board’s involvement.

He was suspended shortly after that.

“The CEO couldn’t co-operate with treasury’s investigation” without the say-so of a board dominated by Motsoeneng, the source said. “And now the CEO is gone.”

None of those involved would confirm Matlala’s reported R18‑million payout figure this week.

Motsoeneng said he had no involvement in the Matlala matter, and referred questions to SABC spokesperson Kaizer Kganyago.

Motsoeneng said he had been “dealing with my own disciplinary matter” at the time of Matlala’s suspension. He was indeed on a leave of absence in November last year.

At the time, however, SABC staffers would not speak on the record about events, saying they feared the consequences when Motsoeneng returned.

“He was not there, but he was very much in control,” said one employee of Motsoeneng.

The SABC has been quietly dealing with the Matlala matter for most of 2016, but with no evident resolution. The agreement with him came just a day before he was due to face a disciplinary hearing – one that would have put the facts of the matter on the record, and would have allowed Matlala to submit documents that would be subject to demands for public disclosure.

Insiders said the treasury had asked Matlala to ascertain who had authorised payments in the R40‑million studio deal and who had pushed for the project to be completed.

Supporters turn foes
Former supporters, who were critical to Motsoeneng’s rise to power, have started to distance themselves from the embattled executive since the ANC sharply reversed its support for him last week – and since he vowed to go to war with the Independent Communications Authority of South Africa (Icasa).

After Motsoeneng said he would challenge the oversight body’s ruling that the SABC may not censor images of destructive protests, the ANC in Parliament said it would summon both him and Communications Minister Faith Muthambi to explain that decision to the communications portfolio committee.

But some consequences will have to wait.

“We’ll deal with those issues after the [August 3] elections,” said ANC communications committee chairperson Jackson Mthembu on Muthambi’s failure to appear at the party’s Luthuli House headquarters this week to explain herself.

Indications are that such a meeting, when it does happen, will be robust – and that Motsoeneng supporters could find themselves isolated. But the number of those supporters is dwindling.

Few of those revising their view of Motsoeneng were willing to be named, but former ANC heavyweight Mathews Phosa said he regrets the role he played in his rise.

“They are taking us back to apartheid days when we had to fight for freedom of speech,” said Phosa of the SABC’s decision to reject the Icasa ruling. “No one must take us back. What they are doing is illegal and unconstitutional … and they will lose this case.”

Phosa fiercely backed Motsoeneng when he was fired from the broadcaster in 2007, and his lobbying – along with that of other politicians – is seen as having been crucial to Motsoeneng’s reinstatement.

“There were different issues at the time. Snuki [Zikalala, former head of news] had dismissed him and it was purely about unfair labour practices,” Phosa said when asked why he had lobbied for Motsoeneng.

The events of 2007 – which remain murky – now appear to have been a turning point. “He walked into the hearing in 2007 and didn’t say a word. He was so scared, you could see it on his face,” said one source of Motsoeneng at the time.

That once-timid man has since declared himself “the alpha and omega” of the SABC. That remarkable change came after apparent political pressure saw him rehired by the SABC. During that time, insiders say, SABC officials including then chief executive Dali Mpofu came under pressure from “senior ANC leaders who were lobbying for him”.

Motsoeneng’s political weight at the time was evidenced by the fact that he worked in the Free State provincial government after being dismissed from the SABC for a spell, insiders say. And his uncanny ability to put politicians on air predates even that.

“He ran a good show and listenership went up,” said former SABC colleague Pippa Green of Motsoeneng’s stint as an executive producer of a current affairs show on Lesedi FM in 2003. “When I think back, he could get almost anybody on the show. From Thabo Mbeki to Jacob Zuma, anyone in the Free State,” she said.

Motsoeneng ascribed his success at Lesedi to simply being a good producer. That job, he said, involves “getting everybody to respond on certain issues”, which he did.

Motsoeneng this week rejected all allegations against him as “just hearsay and rumours and gossip” and insisted that those “malicious people” who were saying things about him should provide evidence.

“Hlaudi is a very nice guy,” Motsoeneng said, in his characteristic third-person description of himself. “The reason why the employees of the SABC love Hlaudi is because I can engage them.”

‘I can engage them’
That love seemed far from universal this week. Producers, contract and other workers were scared to speak out, saying that they were afraid they would lose their jobs.

“Hlaudi walks in the building knowing he owns it. Nothing you [the media] say out there will change that. He’s done well for us and even though we all know what is happening is wrong, there’s not much we can do about it,” said one employee.

Under Motsoeneng’s direction the SABC has continued with the disciplinary action against journalists who spoke up against the censorship at the public broadcaster. The Communication Workers Union said Motsoeneng’s comments about those journalists amounted to intimidation, and that it would step in.

“We are calling an urgent meeting with Faith and Hlaudi to ensure workers are not victimised and threatened,” said the union’s Clyde Mervin.

The South African Communist Party also continued to criticise the SABC and Motsoeneng. “There is a decay of governance happening at the SABC. The structures are so weak that they have allowed the personality cult of Hlaudi Motsoeneng to emerge. That’s why there is name-dropping happening and people act on it,” said SACP spokesperson Alex Mashilo.