Setting past traumas aside, SA’s Paralympic rowers show their mettle as Rio beckons 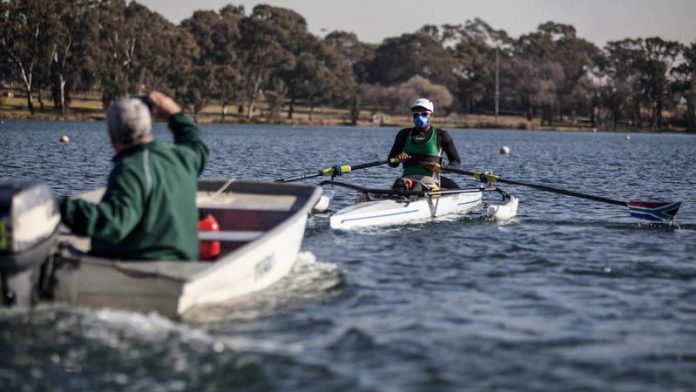 Many years ago, when Marco Galeone was shifted from being the Italian national junior rowing coach to coaching the country’s Paralympian team, he thought it might be a sneaky way of showing him the door.

“I thought maybe it was a nice way for them to fire me,” says Galeone with the merest hint of a smile.

Before he made any hasty career decisions, however, Galeone’s arm was twisted into spending a week in the north of Italy with both able-bodied rowers and the Italian Paralympic crew. He drove up from Naples in the balmy south to find falling temperatures and ice on the roads.

“I arrived for the one-week camp in February to find 20cm of snow on the jetty,” remembers the former member of the Posillipo Rowing Club on the Gulf of Naples.

“The able-bodied guys were complaining – they didn’t want to train, it was too cold. For the disabled rowers, it was no problem. One of them said to me: ‘After all I’ve been through, you think I’m stopping for snow?’ and that switched me on.”

There has always been space in Galeone’s heart for the disabled. His former rowing partner, Fulvio Ragusa, was involved in a terrible motorcycle accident on a Naples highway shortly before he was due to get married, and Galeone will never forget Ragusa’s howl of anguish when he was told by hospital doctors that he would never walk again.

“He didn’t even jump in a boat after that,” says Galeone. “He said rowing was part of his previous life. Every year, on the day of his accident, he had a celebration. He called it his re-birthday, part of his rebirth. That touched me a lot.”

In 2011, having paid his dues as the Italian Paralympic coach, Galeone was induced to come to South Africa by Paolo Cavalieri, the president of Rowing South Africa. The transition to becoming South Africa’s Paralympic rowing coach was largely a smooth one, but there has been the odd bout of choppiness out on the water.

Strange as it may sound, despite a fairly well-developed tradition of disabled sport in South Africa – thanks mainly to Oscar Pistorius and Natalie du Toit – Galeone has found it difficult to recruit rowers for his boats.

“Roger [Barrow, the national coach under whom Galeone falls] and I talk a lot when we go away,” says Galeone. “I tell him that he is more like a surgeon. I am just a nurse. When Sandra [Khumalo] comes to the water, I need to help her out of her wheelchair. I do things as Paralympic coach I would never have to do otherwise.”

Two South African Paralympic boats will be taking to the wind-buffeted waters of Rio in September – Khumalo in the singles, and a fours boat piloted by cox Willie Morgan. The fours boat is a mixed crew, consisting of Shannon Murray, Lucy Perold, Dylan Trollope and Dieter Rosslee.

They showed good form in the World Rowing Cup in Poznan, Poland, in June, finishing second in the final behind the Canadian crew, and they are currently hard at work on Germiston’s Victoria Lake in their final preparation before they leave for Rio at the end of next month.

Most mornings they’re on the water, or in the gym, battling sun and wind and ever-present pain, the keen-eyed Galeone in wraparound shades shouting at them from a dinky motorboat alongside. “Chest up, chest up. Knees together, Lucy – yes, that’s better.”

Each member of the boat has a distinct disability, with no two being the same. Perold, for example, rows with one arm, the result of something called Erb’s palsy – the severing of arm muscles and nerves owing to complications at birth – and Trollope has cerebral palsy and struggles to control the right side of his body.

Rosslee’s right leg is amputated below the knee and Murray’s disability stems from a rare form of septicaemia that can result in organ failure and almost complete bodily shutdown.

Seven years ago, she was flying to Ireland to visit members of her extended family when illness struck. Her nerves, particularly the nerves on the soles of her feet, have been terribly damaged, and the scarring is widespread. She pulls up her leggings to below the knee to reveal a crazy patchwork of what look like burns and scar marks.

Damage to her kidneys as a result of the septicaemia – or, to give it its full name, meningococcal septicaemia – means that her ability to process protein has been compromised and every six months her kidneys get checked. She has to limit her meat and cheese intake and eats a great deal of fruit. “Grapefruit and pineapple are my favourites,” she says. “I have smoothies for breakfast.”

The crew’s conductor is Morgan, the only able-bodied member of the boat. Finding that he lacked the weight to be a rower, Morgan became a cox while still at school.

He’s smart, impressive in a softly spoken kind of way – and hates water. “I can’t stand it; I think I’ve swum once this year,” he says with a gentle laugh. “The rowing makes up for it, though, because I love it. It’s almost as though I have to have a sixth sense. I have to constantly evaluate how they are doing.

“When they are struggling in the last 300 to 400 metres, I have to reach for that nugget to help them through the pain and bring them on.”

In many ways, Morgan is Galeone’s proxy – doing, in part, what he himself cannot do. “Willie’s very, very important to us,” says Galeone. “He’s the one that has to have cold blood during the race. He’s the coach on the water – he steers, he gives direction.”

It is instructive to watch the crew on the water, Morgan hunkered down as low as he can sit to protect himself against the snapping Victoria Lake breeze, Perold rowing bravely with one arm. He leads, cajoles and directs, watching everything on a GPS in front of him, but once they are back on dry land they disperse, mutually supportive to a fault.

After the crew’s gruelling 18km training row and putting away their boat, Murray helps Khumalo out of hers at the edge of the jetty and into her wheelchair. All the crew, with the exception of Khumalo, help drag Galeone’s boat on to a trailer and up to the shed in which the boats are stowed and cleaned.

Although the atmosphere is quietly supportive, tensions can occasionally rise. “It does get hard sometimes, living so close together,” says Perold. “You have to give yourself some alone time.”

Is it all worth it, so much loneliness and sacrifice for so little apparent reward? Galeone certainly thinks so. Once upon a time, he worked for a subsidiary of Olivetti, the Italian information technology giant, and he thinks being on the water trumps being confined to an office for eight hours a day.

Besides, as a young man he did his public service in Italy at a disability school south of Sorrento. He cooked, cleaned and did the laundry – and after a month or two brought indoor rowing machines to the school, teaching the disabled students to row. He is so besotted with the lyrical music of the sport that it could be no other way.

Perold, perhaps more of a natural poet than Galeone, knows why she rows. “All rowers talk about it,” she says. “Some days it just works beautifully.”

For Khumalo, out on the water by herself, strapped to her seat, with small pontoons alongside her boat to lend it stability, the reason for doing what she does is more straightforward. You wouldn’t think it because Khumalo, the victim of a car accident that resulted in terrible spinal injuries, is a dogged rower. She can’t move her trunk, so she has no core strength; as a result, it all looks slightly laboured, although she doesn’t experience it this way at all. When asked whether it is peaceful out on the water, she replies: “Very”, adding, “I feel so independent.”

For Galeone, being in the sun and the spray is a tonic for his restlessness, a reminder of home. “I tell them every day we need to put another brick in the wall. That way, we build our performance all the way to Rio.”

Para-athletes are becoming role models admired by society. But are they managing to change perceptions?
Read more
Sport

Political vendettas and funding shortages are stymying the potential of the country’s athletes.
Read more
Sport

Fresh off winning the wheelchair quad singles title at the US Open tennis tournament, Lucas Sithole is aiming for a medal at the 2016 Rio Paralympics.
Read more
Sport