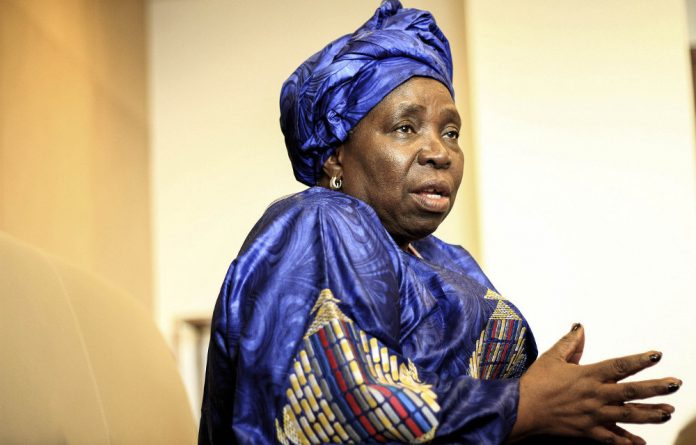 African Union Commission chairperson Nkosazana Dlamini-Zuma is back in South Africa to drum up support for the ANC before the August 3 local government elections — and to rally backing for her presidential bid.

She returned from Rwanda following the AU summit there this week, where she gave the strongest indication yet that she is in the running for the position as the ANC’s, and thus the country’s, next president.

Her chairing of the AU was extended by six months, with questions asked about the damage it may do to her presidential ambitions. Without denying it, Dlamini-Zuma laughed and said her current position “has got nothing to do with the ANC. The ANC has its own processes. The [ANC] conference is 2017, December.”

Dlamini-Zuma will stay on as AU Commission chair after an election for her successor at the AU heads of state summit on Monday failed to produce a winner who could muster two-thirds of the votes.

Dlamini-Zuma is expected to do a door-to-door walkabout in Ekurhuleni on Friday, two days after President Jacob Zuma went to the region on an official school visit followed by an ANC mini-rally to “introduce” mayoral candidate Mzwandile Masina.

Unlike in the rest of Gauteng, the ANC in Ekurhuleni stands firmly behind Zuma and is expected to support the presidential candidate he endorses.

A campaigner for Dlamini-Zuma confirmed that this week’s move was to drum up support and “divide” a province that has already pronounced its support for ANC deputy president Cyril Ramaphosa, who is also a possible candidate for the position.

The ANC’s women’s and youth leagues have already pronounced their support for her, and the lobbyists claimed she had the support of more than 95% of the branches in KwaZulu-Natal, Mpumalanga and the Free State, and more than 85% of the North West — all provinces that are led by members of the ANC’s so-called premier league.

“She has sealed the ANC thing a long time ago,” he claimed. “She will be president.”

The source said, however, that the Eastern Cape was divided over whether to support her.

Andile Lungisa, an ANC provincial executive committee member in the Eastern Cape and one of Dlamini-Zuma’s campaigners, said he was convinced the province would unite in its support for her.

“We are not divided. All regions in the Eastern Cape will back Nkosazana for president. When the right time to discuss leadership comes, I am of the view that the person who must take us forward, before the generation of young lions [the 1976 generation] take over the ANC leadership, is Nkosazana Dlamini-Zuma,” he said.

The Eastern Cape would back ANC secretary general Gwede Mantashe to take over as deputy president, Lungisa said.

Another vocal Dlamini-Zuma fan is ANC KwaZulu-Natal chair Sihle Zikalala, who said he would only discuss the succession issue at the right time. But he did praise her tenure at the AU, saying she had demonstrated that she was a great leader.

As far back as 2012, shortly after his re-election as ANC president, Zuma hinted that there were “qualified women who can be a better president than we are”. This came six months after Dlamini-Zuma was elected AU Commission chair.

Her continental profile has soared during her time in the AU hot seat, but she has also travelled to South Africa often to speak at events and lobby support. Her focus on the continent has raised her profile locally, while keeping her out of the messy politics back home.

She has also received a flurry of awards for her work to promote gender equality on the continent.

During the summit she was hailed by African leaders for the successes achieved on some of the big agenda items, such as getting leaders to agree on a self-funding formula for the AU. It was decided that a 0.2% import levy would be imposed by member states, which is projected to raise R1.2-billion.

The African passport was also launched to great fanfare, and it is envisaged to kick-start a process that will ultimately see a free flow of trade and people across the continent.

Dlamini-Zuma has been slammed, however, by especially Francophone countries for acting too slowly on the crises on the continent.

High drama surrounded the elections at the AU this week after a number of member states in West AFrica pushed for a postponement, complaining that none of the three candidates in the running was suitable for one of the most powerful positions on the continent.

The AU’s legal counsel, however, said that, according to the body’s rules, that was not a good enough reason to postpone the elections.

In what has been described by an insider as a “massive vote of no confidence” in the candidates, up to 28 of the 54 heads of state abstained from voting during the four rounds on Monday in a bid to muster a two-thirds mandate for the candidates.

The most votes any one candidate got was 23 — barely 43%. Pelonomi Venson-Moitoi, Botswana’s foreign minister, was the most popular candidate, but many countries cited the regular absence of her head of state, Ian Khama, from AU activities as proof that Botswana wasn’t serious about the continental body.

Even though she was officially supported by South Africa as part of the Southern African Development Community, diplomats said South Africa did not actively throw its weight behind her campaign.

Uganda’s former vice-president, Specioza Kazibwe, was the first to be eliminated in the four rounds with the least number of votes. Ahead of the summit a dossier containing corruption allegations against Kazibwe was circulated among diplomats in an effort to stop her candidacy.

The foreign affairs minister of Equatorial Guinea, Agapito Mba Mokuy, was considered to have the strongest campaign behind him with the most money, but he barely got more votes than Kazibwe.

Some countries were reportedly concerned that he came from a repressive state and would not be suitable.

Abdoulaye Bathily, a former Senegalese minister and diplomat, is eyeing the position when a fresh round of elections is held in January. Nigeria, however, is also believed to be pushing for its candidate.

It is unclear whether any of the three candidates who stood in this round will consider running again.

AU Commission has no standing in ICC, it’s a country’s choice to leave – Dlamini-Zuma

The dummies’ guide to the African Union

The politics of perception and uncertainty

SA and the AU: It’s complicated

Tough questions in wake of contest

Gloves off in battle for Dlamini-Zuma