Every child needs a black doll in their collection, regardless of their race 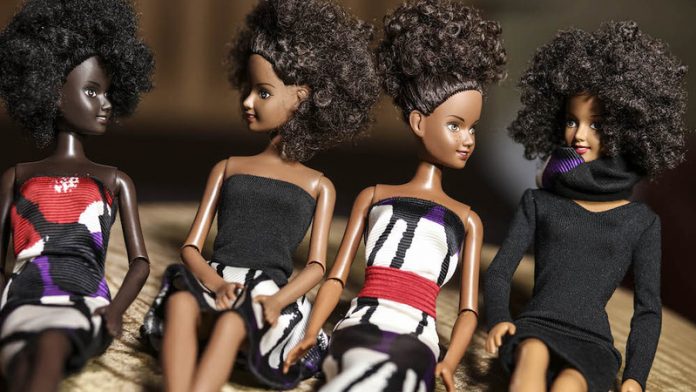 “I don’t make black dolls for black children. Every child needs a black doll in their collection, regardless of their race,” says 34-year-old model and entrepreneur Mala Bryan.

She’s talking about her Malaville dolls; the black dolls with beautiful Afros that are now available in Toy Kingdom stores around the country. Dolls have always been an important part of the St Lucia native’s life, but it wasn’t until she started collecting them seriously as an adult that she realized something was really wrong.

“I wanted certain features and looks on my dolls and it just wasn’t available. I struggled to find black dolls, but more than that, I couldn’t find black dolls with natural hair. I would go to different stores and they just wouldn’t have them.

“They’d send me to certain Wal-Mart or Target stores in black neighbourhoods to get the black dolls,” she recalls.

“And when I’d find them, they were a stereotype – with outrageously coloured hair and hoop earrings. I hated that. Barbie had a line of black dolls called ‘So In Style’ (SIS) and it pissed me off because they’re telling little girls that that’s what they are going to look like when they grow up.”

Frustrated by the lack of positive messaging available in the toy aisles for children of colour, Mala set about creating the narratives that were missing. “I wouldn’t say I made my dolls out of rage, but I was angry about what I was seeing in the toy stores.”

Before Malaville or the world of doll collecting, six-year-old Mala found her first companions in the dolls in her bedroom. “We didn’t have any toy shops on St Lucia, but my mom lived in St Martin, which is more advanced, and she would send me packages with dolls,” Bryan says.

“I lived with my grandparents and was the only child in the house. When I was six, my grandmother became a vendor – selling candies at the roadside. As her vending operation got bigger, I had to help with the selling. She would sell at my school and I had to sell during my lunch breaks and after school, so I never played with children. It was only when I got home in my room that I had the dolls to play with.” And it was there that she crafted the first worlds for her dolls. “All I wanted was Barbie’s Dream House, but as a child you know what your parents can and can’t afford,” she says.

So she made her dream dollhouse out of cardboard held together by Juicy Fruit bubblegum that she would take from her grandmother’s stock. “My aunt worked at a hotel and she would bring catalogues home. I would cut out the curtains and pictures of dining rooms and even clothes for the dolls’ closets,” Bryan recalls.

“My dream house was always falling apart because I’d be so excited to put it together that I wouldn’t chew the gum properly to get it to stick properly!”

Even as Bryan moved on from her cardboard-and-gum dream dollhouse, her love for dolls and the worlds she created for them remained.

Leaving St Lucia at 17 years old, she went to work at the duty free alcohol store at the airport on St Martin. A month later, she was scouted by a hotel manager who wanted her to work at his hotel’s front desk. “I spent two and a half years working at the hotel. In that time I studied hospitality management, because I was sure that was my destiny. And then, one day I went shopping and I was discovered again – this time to do a modeling show in Paris.”

A modeling show she won that marked the start of her career in front of the camera. But it wasn’t always easy. “I was told I’m too pretty for a black girl,” Bryan says. “I look mixed but I’m not. I am super tall and have a friendly face, which is of commercial value, but I’m too tall for commercial work and too pretty for high fashion.” Unsure of which direction her modeling career would go, her agency sent her back to St Martin where she happily went back to her position at the hotel. And back to the dolls. “I used to decorate dolls with artificial flowers and ribbon and I would sell them to tourists at the hotel,” Bryan recounts.

She left the island again three months later to give modeling another go and when her career took off, with Bryan jetting all over the world for work, she found companionship and distraction in her dolls – both in making and collecting them.

By 2010 she had fully immersed herself in the collector’s world. Acutely aware of the lack of black dolls available for children, Bryan embarked on the journey to bringing Malaville to life.

“As I was doing more research, I learned more about play therapy and how it can be used to understand what children are going through and help them,” she says. “Children use dolls in play therapy to depict what is going on in their lives. If a child – regardless of their race – does not have a black doll, how are they going to be able to represent their black friends when they are playing with their dolls?”

Mala Bryan and her Malaville dolls.

This is the essence of Malaville and one of Bryan’s main objectives with her dolls. “A diverse toy landscape is important because children are able to reflect their realities in their imaginary worlds too.” In the six months since she went live with her online store, Bryan has had feedback from parents and children all over the world. “What I keep hearing, more than the dolls’ skin tones, is how much people love their hair,” she says.

“I remember my first relaxer when I was eight years old and it was horrible. Parents don’t want to ‘deal’ with natural hair and you hear those complaints as a kid,” Bryan says.

“When I started modeling, they didn’t know what to do with me as a black girl with natural hair and now it’s a trend – and I’m not sure why black hair has to be a trend – but now people tell me that I’ve caught up to the natural hair trend with my dolls. And I’m just like ‘no, I would like black children to know that their hair is beautiful’. It’s got nothing to do with natural hair being ‘trendy’. It is hard enough being black, and then on top of that we have to deal with hair issues?”

The Malaville production process is based in China, where Bryan has spent time ensuring that the manufacturers create the exact skin tones and hair textures she is looking for.

The first collection features four dolls – Maisha, Mala, Mhina and Malina – all black women of different skin tones and glorious afros. Critics have tried to accuse her of “reverse racism”, but it’s ridiculous, she says. “I’m just filling the gap. There is something missing and I am filling it in. I never said I’m not going to make a white doll, but there are so many of them available and so many options of white dolls.”

It is this awareness of representation and inclusion that Bryan believes makes her dolls particularly special. “They have a sense of innocence about them and I think that sets them apart from other dolls. There’s something about them that says ‘come be my friend’ and ‘come hang out with us’ – a sense of sisterhood.”

It is the essence of Malaville and is represented in everything both Bryan and the dolls stand for. “Even my logo – the M is stylized after the Piton Mountains at home. And then there’s the blue – the ocean – and the sun. So it looks like an island, which is almost everyone’s happy place. It’s my happy place!” she says.

“And that’s what Malaville is about. I didn’t want the dolls to be from specific places, they’re just from Malaville,” she explains. In this way, each child is encouraged to create their own town within the Malaville world – with endless possibilities about what their dolls (and by extension the children themselves) are able to achieve. As a model, entrepreneur, restaurateur and nightclub owner (she co-owns the restaurant Carne on Kloof as well as nightclub The Bank with partner chef Giorgio Nava), Bryan is the epitome of this dream-it-and-do-it philosophy.

And this is only the beginning. With the next collection of dolls in the works, Bryan has her sights firmly set on telling more stories with an even more diverse variety of dolls – including her first collectors’ edition of African goddess dolls.

“I started this journey two years ago and the first collection of four dolls took seven months from start to finish – which is no time!” Mala says. But it was knowing exactly what she wanted and standing firmly behind her ideas that eased the process.

And it is her clear vision for Malaville that is going to see her through. “There are so many people who put fear into us [as black women] about what we need to do before we can do the things we want to achieve, but it’s not like that. You just need to believe in your ideas when you know they are good ones. There’s no changing that in my mind.”