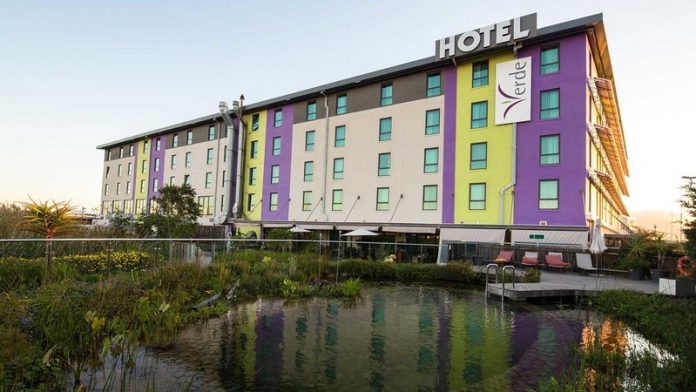 Turning a rubbish dump next to an airport into one of the world’s most innovative hotels is no mean feat.

“Initially it was a simple business decision,” says Mario Delicio, owner of Hotel Verde. “Because there was only a two-star hotel at the [Cape Town International] airport, I thought there was space for another. When looking at what we should do to make the hotel unique, the idea came to build a green hotel. I grew up in Germany and when I came to Africa I felt environmental protection was never really taken seriously.”

As a result sustainability governed the entire construction phase at Hotel Verde, and underpins all daily operations. This adds an entirely different dimension to everyday working, including the need for far more education and training, as well as the implementation of standard operating practices and processes that adhere to sustainable criteria. Employees must see their daily lives and tasks through a sustainable lens.

“Our biggest hurdle was to convince suppliers to walk the green path,” Delicio continues. “There were little green choices in 2011 (when construction began) and if they did exist, they were expensive. It was also hard to convince the banks to buy into green buildings in order to create a better future.”

This is ironic, as now the hotel runs at a third of the cost than it would without the sustainable interventions in place. For instance, the average cost of utilities per room night in 2015 was recorded at R27.39, versus a standard Cape Town hotel of R90.30.

Hotel Verde also has a goal of zero waste to landfill. During the 2015 financial year, this averaged at an 87% waste diversion rate. The waste management policies at the hotel started, however, in construction phase, where a 90% diversion rate was achieved through recycling of building materials. Forty-six thousand Cobiax void formers (lightweight reinforced concrete slabs) were utilised to displace concrete, allowing a saving of 34% (1 279 tonnes) of the total concrete used.

Today, the wetland that runs alongside the hotel boasts over 100 types of indigenous and endemic vegetation, an eco-trail, eco-pool, outdoor gym and two beehives housing over 60 000 Cape honeybees.

With the understanding that their innovations can only bring positives to the building industry, Hotel Verde teamed up with the Green Building Council of South Africa to pilot a building performance toolkit. Now, they have been awarded the highest accolade: a six-star rating in the Green Star SA Existing Building Performance tool, a first for an African hotel.

Hotel Verde is also the first hotel in the world awarded two Leed (Leadership in Energy and Environmental Design) certifications from the United States Green Building Council: one for Design and Construction, and the other for Operations and Maintenance. This is indeed recognition that the hotel has built sustainability into its very DNA, while proving that luxury can go hand-in-hand with green practices.

Says Delicio: “After we saw how successful our hotel is, and observing the positive feedback from our customers, we decided we have a concept which is worth rolling out, and [we] will be launching a chain of Verde hotels. We believe it is the future of hospitality.”