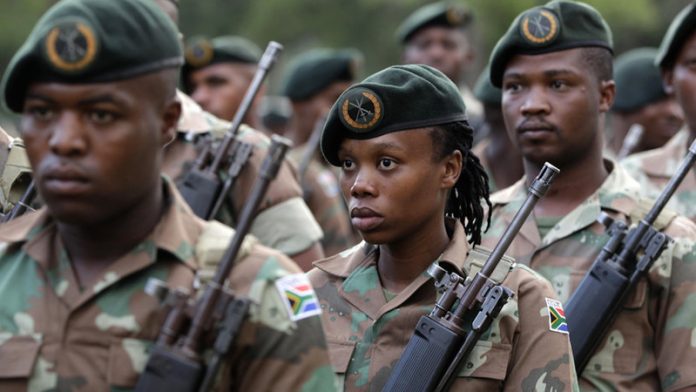 The South African military, like many others around the world, has opened up all positions to women, including combat roles.

This remains a contentious issue given that women generally lack the physical strength and endurance to serve in these roles. In the past, this and their unsuitability for warfare excluded women from some combat branches and more senior posts.

While these debates continue, there is a wider development influencing the integration of women in the military. It is based on the recognition that a more people-centric approach to security is necessary given the effect of war on civilians, and mostly women and children.

As military organisations become less oriented towards violence, the traditional, aggressive, warrior-like culture of the military has to be balanced with new task requirements.

This requires a more conciliatory approach to security, especially where military tasks include the protection of populations. This has led to demands to increase the number of women in peacekeeping operations. These are based on claims that women are more able to interact with the local population, enhance the access of local women to services, improve community relations, reduce the incidence of sexual and gender-based violence, build the capacity of local women, and break down traditional views that discriminate and marginalise women.

While this may be so, it is context specific. Together with the recognition that war affects men and women differently, this has driven the demand to increase the number of women in the military and on peacekeeping missions. It has also made it necessary to mainstream gender in all facets of decision-making.

Tensions in gender integration
South Africa is an exemplary case when it comes to integration of women in the military. Just under a quarter of its full-time forces (24%) are women. An estimated 15% are deployed on peacekeeping missions.

But, while there is acceptance that women may serve in the military, they continue to confront challenges based on gender differences. This is because masculinity is embodied in every layer of the military.

This has brought forth different tensions in terms of managing gender integration. These relate to the accommodation of gender equality, recognising gender difference and having to accommodate alternative values.

Although women are afforded equal rights, they are still obliged to conform to existing physical training standards. These are based on seemingly rational gender-neutral arguments.

Women are under tremendous pressure to meet these standards due to their relative lack of physical strength, based on biological difference with men. Given this, women are typically not judged as “equals”. Even where they do meet these standards, they are generally perceived as less able than men.

The perception seems not to be changing along with the increase in the numbers of women in the military. This is accentuated when women are sent to combat branches, like the infantry, to fill gender quotas, instead of being selected for their physical abilities.

Suppressing femininity
The result is tension around issues of meritocracy that are not only influenced by women’s physical abilities, but perceptions of their suitability to serve in certain posts based on cultural norms, practices and values. Research shows that women need to not only meet the physical standards to be accepted as equals, but also assimilate masculine values embedded in military culture.

In so doing, they typically need to suppress feminine traits like being compassionate, sensitive, softhearted, conciliatory and peace-loving. Such traits are neither valued, nor promoted in the military. They run counter to masculine traits embodied in military culture, such as dominance, aggression and toughness. Such militarised masculinities are highly functional in an organisation whose raison d’être is combat.

For women to be judged as respected soldiers, they have to dilute or suppress their femininity to conform to existing rules and the masculine culture of the military. To fit in, they typically shape their gender identities according to the masculine image of the combat soldier. They mimic the bodily and discursive practices of men.

This runs counter to the ideals of gender mainstreaming initiatives. These call for more women in the military, based on the contribution they can make as a result of their femininities. Also, for the need to infuse alternative values into the organisation.

The argument is that women can contribute something different by bringing different skills sets and perspectives to the military. These can enhance operational success. They can bring about security sector reforms in a more gender-sensitive way.

But even where women’s contribution as women is recognised, this is typically not valued equally by men and women. Yet, research on the South African National Defence Force shows that women regard their contribution to peacekeeping operations far more highly than men do.

In addition, women’s civilian identities as mothers, their sexuality and vulnerability are often used in various ways to “other” women and to justify their exclusion from certain roles in the military.

These often result in women’s authority being undermined and their leadership capabilities being questioned. Women also have to face different degrees of gender and sexual harassment. These are typically under-reported for fear of the antagonism they may evoke, the effect they may have on women’s careers, and social isolation.

The consequence is that even those who reach the top are not willing to change the rules. An easier option is to “lose one’s womanhood and act like a man to get noticed and heard”. So instead of infusing alternative values based on femininities, women “simply adjust to organisational practices and make no real difference” in changing this.

What research in South Africa and elsewhere has shown is that militarised masculinities remain embodied in military culture. Few military women are prepared to adopt an assertive feminist stance to bring about a military culture that is more appreciative of gender differences.

This is unfortunate, as military missions that entail the protection of populations – which are mostly women and children – require “all” soldiers to possess a combination of both positive femininities (compassion) and masculinities (aggression).

This cannot be achieved where femininity is undervalued and suppressed. Military women need to “trouble” gender relations and adopt a more militant feminist stance to bring about this change for the greater good, peace and security.