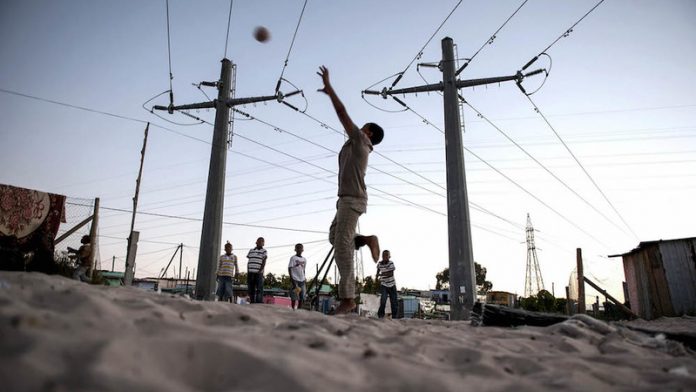 South Africa’s energy mix stands at the edge of one of those hypothetical cliffs. Forward will mean a water-scarce country with more thirsty coal-fired power stations polluting the atmosphere, and the bankruptcy that will come from a nuclear build.

It will mean that, by 2030, Eskom will have plenty of expensive power but few people to buy it.

Another version of the future inked out by the government’s own strategists would see a smart grid, with a mix of energy sources powering the country within the next decade. But this path is rapidly being eroded. It would seem that renewable energy sources and self-sufficiency are being blocked in favour of a politically motivated nuclear build and Eskom’s economic interests.

As it stands now, South Africa’s energy mix is a product of the huge amount of coal lying beneath the green fields of Mpumalanga and the dry veld of western Limpopo. Exploiting this made sense in a world where few were concerned about the disastrous effect of burning coal – the emission of greenhouse gases and warming the world. And South Africa’s sole nuclear station, Koeberg, helped to bolster local industry during the political isolation of apartheid.

These were pragmatic choices, and two more coal-fired power stations, Medupi and Kusile, were started in the mid-2000s with the same thinking in mind. South Africa’s principal energy road map, the Integrated Resource Plan (IRP) 2010, reflected this – an over-reliance on new coal and nuclear power stations. A token amount of renewable energy was included in the plan.

But that plan is now obsolete.

In six years, the energy landscape has changed dramatically: renewable energy costs have dropped by 300%, industry has become much more efficient, many mines and heavy industry are producing their own power – and many countries have abandoned nuclear power, denting the prospect of lower prices resulting from bigger production runs.

The IRP 2010 plan was also based on the “aspirational economic growth” data of the National Development Plan. The 5.4% a year projected growth was based on what was needed to expand the economy and take South Africans out of poverty. Real growth briefly went as high as 4%, but it is projected at 0.1% for this year.

A 2013 update of the IRP sought to reflect how much the world had changed. It proposed a smaller, more nimble, energy mix. This was possible because much of Eskom’s coal-fired fleet would be retired in the 2020s and 2030s. That meant the grid could be rebuilt to reflect the changing world. It concluded that: “Flexibility in decisions should be the priority to favour decisions of least regret. This would suggest that commitments to long-range, large-scale investment decisions should be avoided.”

The update said, by 2030, South Africa’s energy mix would come from resources that had previously not been exploited. Solar plants would soak in the Northern Cape sun and wind farms would harness the power of coastal winds. Natural gas, either from under the dry Karoo or Mozambique, with open-cycle turbines, would provide a back-up baseload power.This suggests it would be wise to delay any decision on a new nuclear build.

But the update did not make it past the Cabinet. The Mail & Guardian reported at the time that the decision to delay any nuclear decision was at odds with the politics of the time. Instead, the government signed a memorandum of agreement with Russia and its state nuclear agency, Rosatom, and other interested parties. A trillion-rand nuclear build is still on the table.

Meanwhile, Eskom is celebrating a year without blackouts. Mostly, this is the result of a stagnant economy and dropping demand. This means the country can largely live within its 42 000 megawatts (MW) of capacity for the time being. The 2010 IRP aimed to double that. The panic over, the state utility is now faced with stiff competition from renewable energy producers, who can sell electricity to the grid for 64c a kilowatt-hour – half the envisioned cost of electricity from Medupi and Kusile. And the cost of nuclear is roughly projected to be nearly triple that.

Stuck with its monolithic power stations, Eskom has to maintain and finance a fleet of plants it will be running for decades. Medupi and Kusile will work for 60 years. But this is in an age in which technology is being rendered obsolete in a decade. That means Eskom has to pay off the R200-billion that each power station will cost by charging consumers more than power that can be sourced elsewhere.

So the utility is trying to undermine its competition by not buying more power from renewable energy producers than already agreed to. This is creating uncertainty and uncertainty drives investors away. Yet renewables have brought in about R200-billion in foreign direct investment.

The world is moving on, with or without the state and Eskom. The Industrial Energy Efficiency Improvement Project has already saved 30 industrial facilities and 384 companies about R1.5-billion in the past five years. That means 800MW less capacity is needed – the equivalent of one of Medupi’s six boilers. Mines and smelters, which use two-thirds of Eskom’s electricity, are either closing or starting to generate their own power. Municipalities also want to bypass Eskom – for example, the City of Cape Town is seeking permission from the energy department to sign contracts directly with renewable energy producers. Rapid advances in small-scale technology mean wealthier homes and businesses are moving off the grid.

The recent opening of the 1 300MW Inga pumped storage scheme also means more renewable energy can be stored for peak use times.

All this will mean a world in which Eskom has fewer customers. Given the current trajectory, that will leave the state – which backs the utility’s loans – with mega-power stations and huge overcapacity. Consumers will have moved on.

The alternative – a smart and flexible grid exists. The state just has to choose that path before it walks off the cliff.