Marikana: Shame on you, lying Lonmin — houses promised to workers still not reality 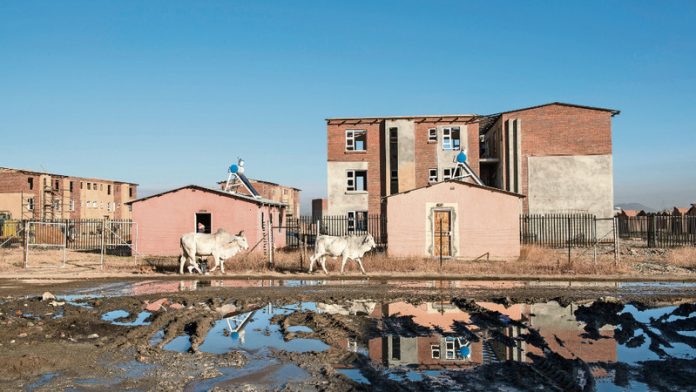 It should have been a devastating wake-up call. When the police opened fire on striking workers at the Marikana platinum mine on August 16 2012, killing 34 of them, a global spotlight was turned not just on the use of force but also on the appalling conditions in which the miners live.

Lonmin, the Johannesburg-based company that owns the mine and is well aware of the dire housing situation facing many of its employees, should have been shocked into action, especially after the government-appointed Farlam commission of inquiry found that its failures had contributed to the tension and labour unrest.

Lonmin should have looked at those 34 lost lives and promised to start over, with a new dedication to fulfilling its housing commitments.

But that is not what happened. Amnesty International has examined Lonmin’s response to the Farlam commission’s findings on housing, and whether it is planning to improve conditions for its workforce.

Marikana today is a land of rock dust and muddy water, where thousands of people live in informal settlements without access to electricity, adequate sanitation facilities or running water. They are desperate and angry. It is exactly as it was four years ago. Lonmin told Amnesty International that 13 500 of its employees are still in need of formal accommodation.

The main informal settlement at Marikana is Nkaneng, where many Lonmin mineworkers live. Pit latrines are shared by many households, water is scarce and there is no sewerage system. The households that have electricity access it through illegal connections.

Shacks are made from corrugated iron sheets and scrap material, exposed to cold, damp, heat, rain and wind. The shacks are also absurdly easy to break into — they can literally be pulled apart — so it is impossible to feel secure.

Most Lonmin employees are migrant workers, either from distant provinces or other countries such as Lesotho and Mozambique. This year, more than half the 20 000 permanent workers employed by Lonmin at Marikana are migrants.

This is why housing is such an issue there. People often arrive knowing no one and with no local support — the living and working premises becomes their whole life. What is more, workers are mostly single men, many of whom have families and permanent homes in other places.

Traditionally these men have been accommodated in barracks-style hostels with as many as 18 people crammed into one room. Lonmin provides a “living-out allowance” for workers who are not accommodated in renovated hostels, but it is illogical for workers planning to return to their home countries or provinces to invest in a second home.

As PK, a 50-year-old mineworker from the Eastern Cape, who did not want us to use his name, told Amnesty International: “My plan is always to go home. I don’t want to buy a house here due to my age. I don’t want to stay here because at home I have my family.”

In a display of staggering cynicism, Lonmin has used the circumstances of its workers as an excuse for its failure to develop adequate housing in the area, saying its employees do not want to buy houses.

And so, as hostels are being phased out, many mineworkers end up in informal settlements such as Nkaneng, where every part of daily life is a struggle.

TM, who is currently unemployed, moved there from the Eastern Cape in search of work in 1998. She lives in a corrugated iron shack in Nkaneng next to a toilet that is shared by 100 people.

When it rains, TM puts on gumboots and works for hours to shovel the dirty water away from her home. If she is unlucky enough to be out when the water comes, she will arrive to find the shack flooded and spend the night trying to create a dry spot to sleep in.

The fact that TM has lived in Marikana for almost 20 years shows how entrenched the poverty is here, and how difficult it is to escape the cycle. The government has attempted to address the problem of adequate housing for mineworkers by setting out standards companies must meet in the Mine Charter.

It asks companies to produce and adhere to social and labour plans (SLPs) that include plans to improve accommodation for mineworkers.

But, clearly, improving the lives of its employees is low on Lonmin’s list of priorities. In 2006, Lonmin promised that by 2011 it would phase out all single-sex hostel accommodation and convert 114 existing hostels into bachelor or family units. It also pledged to build an additional 5 500 houses for employees, and ensure that plots of land on which houses were built were connected to infrastructure for water, electricity and sewage.

By 2012, when the strike took place, workers were already deeply unhappy about their living conditions. Despite its promises, all Lonmin had done was build three “show” houses and convert 60 hostels.

In interviews and written correspondence with Lonmin executives in 2016, Amnesty International challenged the company to explain how it justified the ongoing failure to provide housing and what it intended to do about the situation. Alarmingly, although the company acknowledged that there was a serious housing problem facing its workforce at Marikana, Lonmin executives stated that the company had no intention of building the 5 500 originally promised in the 2006 SLP.

Lonmin has told Amnesty, in classic corporate-speak, that it wants to focus on the future. But when we looked at what it is now proposing we found the same failed strategies and, as of May 2016, it had not delivered a single additional house for mineworkers.

This is a case of a promise shamelessly broken, but Lonmin refuses to take it seriously. When we questioned it about its miserable failure to fulfil its obligations it reeled off a litany of conflicting excuses, blaming the financial crash or a lack of infrastructure in the area.

This situation would be unjustifiable for any company. What makes the situation with Lonmin inexplicable is that its failures persist even after the housing situation at Marikana contributed to the tension of 2012.

In January a storm hit Nkaneng and many of the shacks collapsed while workers were inside. Those who lost their homes are being temporarily housed in converted Lonmin hostels, but the company has told them they must return to Nkaneng — to the indignity of crowded shacks in which people must bathe where they sleep, and which could fall apart at any time, endangering the lives of those inside.

What will it take to force Lonmin to show that it cares about these people? Another storm, another strike? Justice is long overdue, and excuses and lies just won’t cut it any more.