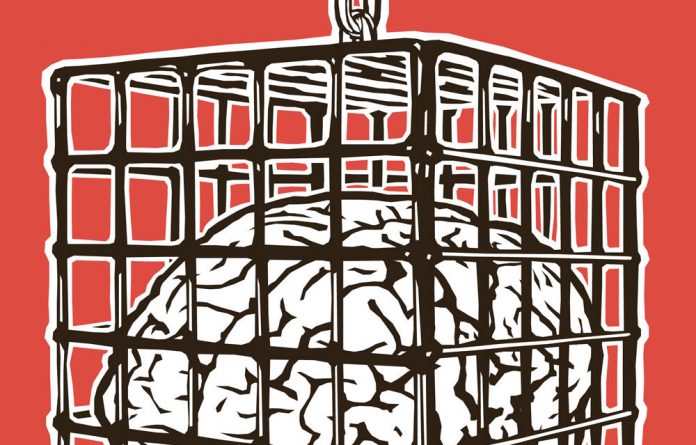 If the present sociopolitical and economic configuration of South African society is the dream of liberation achieved, it may be time we find a new dream because post-apartheid South Africa increasingly looks and feels like a nightmare.

I’ll resist the temptation to recite these social ills. Besides, we know too well the forms of symbolic, civil, literal and existential death that afflict, especially, that category of human beings who live in despicable conditions that are characteristic of the “post” of post-apartheid.

I want, instead, to suggest that part of the obstacle to radical (not necessarily an anarchist) psychosocial change in South Africa is at the level of our social consciousness. I specifically want to imagine what a social consciousness that might be a pathway to “post post-apartheid” might look like.

There is a sense in which post-apartheid social consciousness is trapped in a raciological language game that sets limits to what we perceive to be possible (and impossible) ways in which to work through and resolve many of our problems and especially those of our racialised histories and their effects.

Consequently, we are trapped in a language and imagination matrix that restricts our perspective to our narrow racial categories, histories, desires, aspirations, fears, pain, privileges, prejudices and anger. I’m not suggesting that questions of identity and racial politics are unimportant; they do have real effects in the lives of living human beings.

Rather, my sense is that the ways in which we think, talk and imagine ways to resolve our racialised and collective challenges is limited and limiting. It is limited because it often ends up being preoccupied with race, racism, racialisation, xenophobic nationalism and racial capitalism and thus offers no exit strategy from the on-going quasi-apocalyptic chaos. Our social consciousness is plagued by racial and national narcissism that spreads over our social imagination like a shifting shadow.

This language and imagination matrix is also limiting because we fail to imagine alternative futures of collaborative existence beyond our racial enclaves and our current consciousness of racial, ethnic and gender competition.

I’m aware that there are people who are not ready, and may never be ready, to have a conversation that stretches the imagination beyond race, class and gender struggles into the terrain of “the human”.

This, they lament, is a privilege they cannot afford. They argue that we must first resolve all the issues arising from our antiblack histories then we can perhaps entertain the idea of the human.

In other words, black people must first be humanised before we can have the luxury to talk about the human. I’m almost persuaded by this argument but I remain unconvinced. This logic will not get us beyond the present social imagination cul-de-sac, but before I get to that I want to outline what I mean by “imaging alternative futures of the human”.

I often wonder what the world might look and feel like if in my encounters with other human beings I decided, as an endless practice of personal psycho-emotional freedom, to pay attention to their language and practices more than I do to their national, racial, sexual, gender, and religious identities and whatever social, cultural, symbolic and economic capital they possession. Specifically, I would be looking out to see and understand whether in their language and ways of being, moves a spirit of death or life; a spirit of beauty or destruction; a spirit of mediocrity or excellence.

All this, for me, begins to constitute a new way of living with other people that ruptures the old psychological membrane enveloping our present social consciousness. It begins to set a new mental attitude and a new way of seeing myself and the world that I constitute focuses on the quality and energy signature of human consciousness that I encounter in the everyday business of living my life.

In all this, I believe that I would be imagining not only alternative ways of being human within myself but also with other human beings. It seems to me that I would be redrawing the psychosocial landscape meanings of “being human” and “freedom”. What would happen if you devised your own scheme of getting out of the “empire of the mind”, as Winston Churchill called it, which keeps us in bondage today even as we sing freedom songs?

How might you and I encounter each other anew? What new possibilities for being human open up for us? From this new perspective, how might we collectively respond to the complex challenges of post-apartheid?

Let me now say something about why we do not have the luxury to wait until all historical injustices have been resolved. South Africa, like most of Africa, has the challenge and opportunity to not only grapple with questions of racial politics, economic inequalities, and government corruption among many others issues, but to do so in the context of a world in which the future of the human species is on the agenda.

For instance, capitalism presents consumerism as a way in which we can define who we think we are as human beings; economic fundamentalism has become a political and economic way of life in which money is a value in itself; digital media and technology (as evolving virtual realities) is keeping us in contact while also facilitating a breakdown of social and intimate relations; medical technology is giving us the ability to change the structure of human DNA so that in the near future couples may be able to design their perfect baby; and some are beginning to think of aging and dying as curable diseases through genetic engineering.

All this is happening in the context of residues of colonial and apartheid projects that remain unresolved in South Africa, Africa and African diaspora societies. Therefore, the challenges and opportunities of old and new worlds being ushered in by current technological advances, geopolitics and economic rationalities will be the lot of all human beings in South Africa, Africa and the world to deal with.

None of this will be put on hold until black people first resolve the afterlives of colonial modernity as they play themselves out globally today. The past two decades have shown that the present political leadership together with much of big business have, at best, a disinterested curiosity about the future of South Africa beyond their immediate networks of family, friends and business/political associates.

There is a sense in which to expect a shift of consciousness in the present politico-economic system borders on wishful thinking. Similarly, it is increasingly becoming clear that to expect that any political party will provide viable solutions to the challenges facing post-apartheid seems dangerously naïve.

As I see it, this leaves the matter squarely in my hands and in yours to begin experimenting with alternative ways of being human with ourselves first and with those we live with and encounter everyday.

The task before us is both personal and collaborative and it is to invent a new system and architectural blueprint of being human. At our disposal are the tools of imagination and language.

I imagine that our collective efforts, even if we were to never meet in our lifetime, would contribute toward waking us up from our post-apartheid nightmare and to lead ourselves toward psychological liberation as a stepping-stone to other forms of liberated human life.