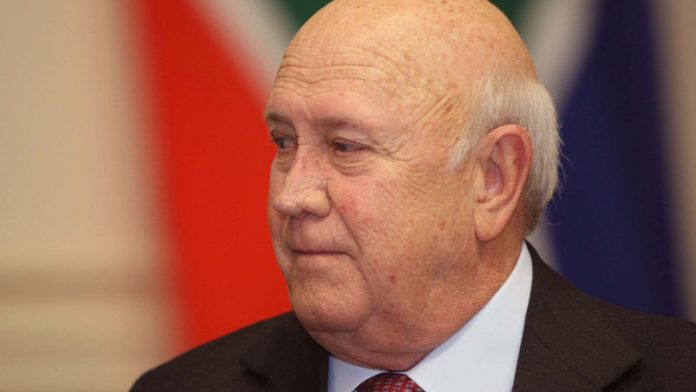 Many white South Africans will be forced to leave the country under the current government’s policies, former President FW de Klerk said.

“We have to face the unpalatable fact that our present government has adopted policies that are consciously directed toward harming the core interests of a section of the South African population according to their race,” De Klerk told attendees during the launch of the Centre for Unity in Diversity.

De Klerk criticised the government’s Broad-Based Black Economic Empowerment (BBBEE) and affirmative action policies, saying they were incrementally limiting the economic and cultural space within which minorities can operate.

“The ultimate goal is a society in which land, jobs, power and wealth will be allocated according to racial compositions of the population. The lives of citizens will once again be determined by race not merit.”

De Klerk said this was bad news for minorities who comprise of 26% of the population.

“Their share of the wealth, jobs and land will decline commensurately over the next 30 years. As the BBBEE noose tightens, it may become increasingly difficult for white South Africans to find employment. Inevitably, many will be forced to leave South Africa.”

He said there was a toxic argument, propagated by the current government, seeping into national discourse that whites have not atoned for their sins and all land was stolen from black people.

“That all of these propositions are either false of gross generalisations is neither here nor there. The problem is that they are being actively propagated by our present government and they are fervently believed particularly by government itself and the radicalised youth.”

There were reassurances however, he said.

He told attendees it was reassuring that whatever the government’s ideological ideals might be, it could not implement them without, “causing damage to the country and the interests of its own supporters”.

De Klerk said he was also reassured by the results of the local government elections which signalled an important move away from race-based politics.