The law, the homophobic pastor of hate, and why Malusi Gigaba barred him from SA

The department of home affairs earlier this month nodded its head, granting homophobic American pastor Steven Anderson entry into South Africa. But a few documents later, some outrage from LGBTI activists and a review of the law led Malusi Gigaba to change his mind.

Gigaba referred to a section of the Immigration Act that deals with people prohibited from entering the country to justify why the ministry had decided to deny Anderson access to the country. According to the act, members of organisations and associations that promote social violence can be prohibited from South Africa.

“I have withdrawn their visa exemption status enjoyed by all Americans,” Gigaba said on Tuesday.

The minister said that his department had received a dossier of documents on the pastor which forced home affairs to reconsider its initial position that Anderson would be allowed into South Africa. Gigaba said that it wasn’t just his homophobic stance that worried the department, but Anderson’s treatment of women and black people too.

“He also denies the holocaust. He advocated for violence against women. He denigrates Africans, the same Africans who are going to allow him space to establish his church, he denigrates them. He is a person generally who is anti-human. If you confine him to homophobia, we will then shut our eyes to his other transgressions,” Gigaba said.

The pastor, who is from Arizona and is the founder of the Faithful World Baptist Church, ignited widespread anger when he celebrated the mass shooting at LGBTI nightclub, Pulse in Orlando, Florida, where 49 people were killed, s aying there are “less paedophiles in this world”.

He also recently made remarks about former archbishop Desmond Tutu being a pervert because of his support for LGBTI rights.

“People like Desmond Tutu go parading around and talk about their pro-homosexual beliefs but they did not get that from the Bible and any Bible believing Christian will know that,” he said in an interview with Kieno Kammies on CapeTalk.

“The religious leaders are a bunch of perverts themselves like that Desmond Tutu who goes around in a pink dress.”

There is no deadline on the ban against the pastor, which also includes 17 people who were meant to travel to South Africa with him. Gigaba also said that any member of Anderson’s church would be unlikely to enter South Africa because they support an organisation that promotes hate speech. Anderson will now have to apply for a visa to enter the country.

“The only basis for consideration [for the visa] will be his public repentance,” Gigaba said.

Outrage was sparked against the pastor after LGBTI communities sent a petition to home affairs with around 60 000 signatures, demanding that Anderson be banned from entering the country. Gigaba said that without the alert from activists, home affairs would not have been aware of the pastor’s grim history.

Anderson responded to the ban in a Facebook post, saying he “feels sorry for people who live in South Africa”. 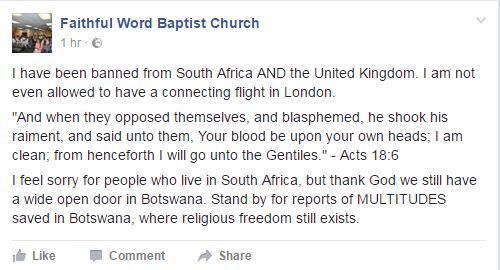