​New book revisits cricket and the colony in SA 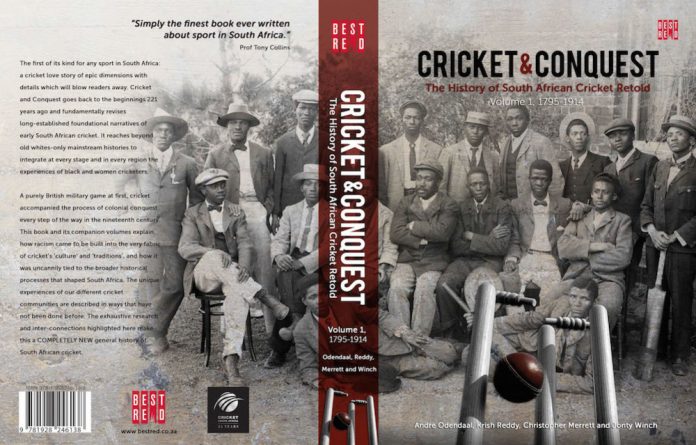 This is a door-stopper, whichever way you look at it. Weighing in at 470-odd pages (60 more if one includes endnotes, the introduction and two statistical appendices), eight pages of acknow-ledgements and tens of pages of sometimes rare and intriguing old photos, it is in many ways the Sir Vivian Richards of cricket books.

Like Viv, it also comes with attitude. The authors’ plan is to right historiographic wrongs, inter alia, to tell the sometimes splendid, sometimes tragic story of early African cricket history in this country, as well as telling the equally neglected and sobering story of early Malay and coloured cricket.

Called “ball-casting” in the early days, cricket arrived in the form of equipment secreted away in the hold of Admiral Elphinstone’s HMS Victorious when she berthed at the Cape in 1795. Concentrated around the garrisons, with a decidedly military cast, the game’s tentacles spread eastwards.

The 1820 settlers helped. The first recorded club was at Sidbury in the Eastern Cape. Cricket became a medium — liquid-like — through which imperial values were transmitted. It also became an aide memoire. With its lulling Joycean rhythms — think of the cricket scenes in Portrait of the Artist as a Young Man — and the gentle “pock-pock-pock” of ball on bat, cricket reminded the colonisers of an increasingly distant home.

An indigenous African elite looked at these flannelled fools and wanted in. Self-improving to a man, cricket provided the path to what they eventually hoped would be full citizenship of the Cape Colony.

Chiefs and worthies sent their sons to the Anglican Zonnebloem College, initially based in Bishop’s Court but moved quickly to Walmer Estate on the edge of what became District Six.

By the 1860s, Zonnebloem had several African teams, the impecunious college spending what some felt was a disproportionate amount on new cricket equipment.

Upon graduation, the young men took the game back home to the hamlets of the Eastern Cape. Cricket flowered. By the mid-1880s there were regular “Native” inter-team tournaments and, in a fine case of nominative determinism, Champion CC from King William’s Town emerged as the competition’s first winners.

Austin Ngcumbe, the tournament’s best bowler, thankfully missed the dreaded post-match interview with Pommie Mbangwa. He was presented with a stick.

The period also saw the parallel rise of isiXhosa newspapers, crazy about the game.

Under John Tengo Jabavu, the editor of Imvo Zabantsundu (Native Opinion), they went so far as to publish news of WG Grace’s imperious knocks against the Australians.

Scorecards and match reports drifted in from all corners of the Eastern Cape. There was spirited debate about the best teams and best players. Contrary to Daryll Cullinan’s recent indiscretions that appeared in ESPN cricinfo, cricket was widely played and cherished.

As inaugural winners of the first inter-town tournament, Champion CC were soon playing against Albert CC, a white club, in a rare example of cricket across the colour line.

Without going into excessive detail, many in the black African community remembered that several Albert CC players had relatives with distinctly iffy colonial pasts.

The match became symbolic, pulsing with the memory of imperial treachery and misdeed.

Champion held a first-innings lead but were unable to force home their early advantage as the game ended tamely owing to bad light.

The match also represented the idea that such contests would become commonplace.

But as the Cape began to be governed by a more self-consciously jingoistic elite so, figuratively, the balls were removed from the black African game.

This tragic — even epic — element is not given its due in this scrupulous, painstakingly researched but sometimes plodding book. The writing needed to be more muscular, more ambitious. Fewer careful singles to third man, more booming cover drives.

Luke Alfred will be at the Litfest in session 5 on Saturday 8 October from 3.30pm to 5pm: Writing white: We need to talk about Lionel, with Robyn Bloch and Craig Higginson, chaired by Darryl Accone

Scrap the borders that divide Africans

Too big, too strong, too powerful, too black for weepy, waifish Sharp and Jozwik

Twist memory and you distort identity