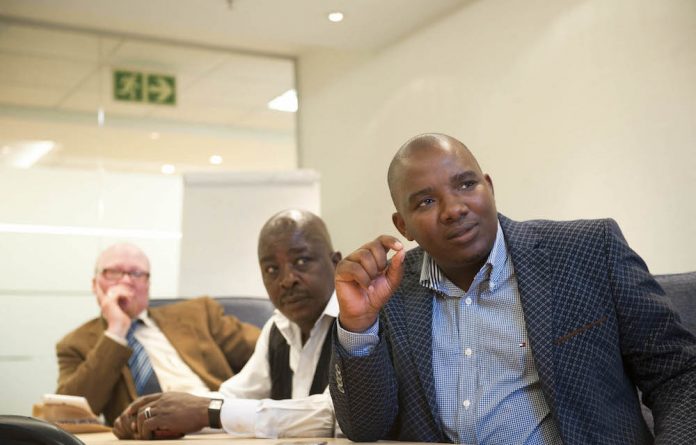 Fears are growing among the Bapo ba Mogale that the investment company set up by the traditional council and Lonmin, in which the mining giant deposited millions of rands for their benefit, is close to financial ruin.

The 40 000-strong community is in the Rustenburg platinum belt, which includes Marikana.

The investment company created by the Lonmin empowerment deal, Bapo ba Mogale Investments (BBMI), is being sued by KMC Holdings for R30-million. The company alleges it has not been paid for nine months and that BBMI has illegally terminated its contract to transport ore.

At least two other companies claim the company owes them large amounts of money. Fearing that they will not be paid what is due to them if they go public, they asked not to be identified.

AmaBhungane is also in possession of an email dated September 19 this year from BBMI’s logistics division apologising to suppliers.

“We have experienced cash-flow difficulties from the beginning of 2016, which have burdened you as a result,” it reads. It also requests suppliers to submit invoices dating back to October last year.

The Bapo community is already reeling from the public protector’s finding that R600-million in mining royalties, accumulated since 1995 and held by the North West government, has been looted.

Lonmin spokesperson Sue Vey conceded that the company is aware of complaints that some contractors have not been paid and revealed that the National Empowerment Fund (NEF) has been called in to help BBMI manage its cash flow.

An agency of the trade and industry department, the NEF provides financial and other assistance to black businesses.

Kgomotso Morare, the spokesperson for the Bapo community who oppose the traditional council, said: “Millions have been paid to BBMI. Surely suppliers who do the actual work should be the first to be paid? How are local companies going to create jobs if they close down?

“Another issue is that since this company started operating I have never seen a tender being issued. It seems a few connected individuals benefit.”

BBMI has yet to produce an annual report despite trading for almost three years. Vey said financial statements are being prepared.

Lonmin has been mining in the area since 1969, but years of friction between the company and workers boiled over three years ago when police shot dead 34 striking miners.

The Marikana massacre had a positive sequel in 2014 – an empowerment deal between Lonmin and the traditional council. In terms of it, the council will receive a 2.25% equity stake in Lonmin – equivalent to about R5-million a year – and R100-million in cash, payable over five years.

Lonmin promised to provide R200-million in procurement opportunities to the Bapo community over 18 months, to be administered by BBMI.

The mining house also pays the tribal council rent, but both parties refuse to disclose how much it is.

Millions paid to get company off the ground

According to a Lonmin media release in July, the traditional council gave BBMI R40-million as a start-up, with the first R20-million being paid in 2015 to assist the company tender for and manage procurement contracts, and the balance in February this year.

A total of R14-million of the second tranche was paid to a service provider for machinery, and R6-million was used to facilitate the raising of a loan from FNB. BBMI did not disclose the size of the loan.

The investment company’s debt crisis threatens to deepen existing divisions between Bapo members who are demanding answers and the so-called ambassadors – staunch members of the tribal authority.

Meetings often end with clashes between the two groups. Five people were injured last month when people wielding sticks and pangas disrupted a meeting at a local school that was called to discuss the removal of the BBMI chief executive, Lehlohonolo Nthontho.

Disgruntled Bapo members blame the BBMI’s financial woes on Nthontho and Vladimir Mogale, the spokesperson for BBMI and the tribal council.

A source in the royal family said Mogale was pulling the strings behind the scenes because of the influence of his father, acting kgosi Radikobonyana Emius Mogale.

The source said: “Vladimir’s name is not on anything; he gets his friend Nthontho to do the paperwork. Both of them choose their staunch supporters as directors of BBMI’s subsidiaries.”

The source also complained that BBMI management is not held to account because there is only one independent board member, with one from Lonmin and three from the traditional council.

The Bapo community has questioned Nthontho’s background, experience and qualifications.

“Nthontho is not a member of the Bapo community. Where does he come from? All we know is that he is Vladimir’s friend who was introduced to us as the adviser to the kgosi,” said the source.

“The next thing we know he’s signing deals with Lonmin and he’s the CEO [chief executive officer] of the investment company, handling millions of rands.”

Bapo members are also unhappy about the directorships held by Nthontho and chief financial officer Kolobe Mashala in BMMI’s subsidiaries, saying this makes it difficult for them to exercise independent oversight. “They are just employees. Why couldn’t they get someone from the community or royal house?” asked the source.

Vladimir Mogale defended Nthontho’s role and said he was headhunted and that the tribal council gave him permission to represent them.

Nthontho said the BBMI board and council appointed him based on his role in negotiating the empowerment deal with Lonmin and “other strategic governance work”. But he refused to produce his CV.

The Bapo community’s suspicions about Nthontho were heightened when a local radio station, Madibeng FM, claimed that his identity document was false.

Station manager Nick Motloung told amaBhungane that, according to a source at the home affairs department, there is no information under Nthontho’s identity number. “Home affairs has nothing on file – no application form, no birth certificate. My source told me this is usually an indication of a fraudulent ID.”

Nthontho dismissed the allegations as baseless.

Vladimir Mogale confirmed that the tribal council was aware of the allegation, but said no formal complaint has been lodged. “Once we receive the complaint, the office will investigate and revert to the complainants,” he said in an email.

Motloung also alleged that supporters of the tribal council laid siege to the radio station in July and demanded that he step down.

“They came here and tried to stop the broadcast. They were banging on the door,” he said. “Since then, every time there is a debate about the management of [the BMMI’s] finances, I receive death threats by phone during live broadcasts.”

The spokesperson of the NEF, Emmanuel Mohlamme, confirmed that four BBMI subsidiaries had received a total of R30-million for contracts.

“Overall, it is estimated that these contracts will benefit in excess of 50 000 members of the [Bapo] community through a social plan that the NEF is in the process of assisting the community to devise,” Mohlamme said.

Mogale said BBMI is registered as a nonprofit organisation and that the Bapo community will benefit when it starts to make a profit.

The allegations that the Bapo ba Mogale’s mining royalties have been looted are being investigated by the public protector’s office, which is expected to release its report in December.

According to media reports, the recently retired public protector, Thuli Madonsela, briefed the Bapo community in July on her preliminary findings and confirmed that their royalties account, which is held by the provincial government and should contain R600-million, is empty.

The contract was for BBMI to rent three Bell dumper trucks for 24 months with an option of renewal. Chuene said Collins Ncube, the general manager of BBMI subsidiary Bapo Freight and Logistics, told him in a text message about the tender. AmaBhungane has seen the text conversation.

The relationship turned sour when they stopped paying him for the trucks.

Chuene said after eight months of back and forth, as nonpayment started to undermine his business, he decided to go court to force the company to pay.

The amount he is demanding from BBMI has steadily escalated. Initially, he demanded R800 000, the amount he says he was owed at the end of August this year.

Chuene said the last straw was when the company hired another contractor to move the ore. He has now instructed his lawyer to increase the demand to R30-million for loss of income and breach of contract.

Ncube said KMC Holdings was not the only supplier to be affected by BBMI’s “financial setback”. He would not say anything else.

Ncube said KMC Holdings was not the only supplier to be affected by BBMI’s “financial setback”. He would not say anything else.

The amaBhungane Centre for Investigative Journalism produced this story. Like it? Be an amaB supporter and help it do more. Sign up for its newsletter to get more.