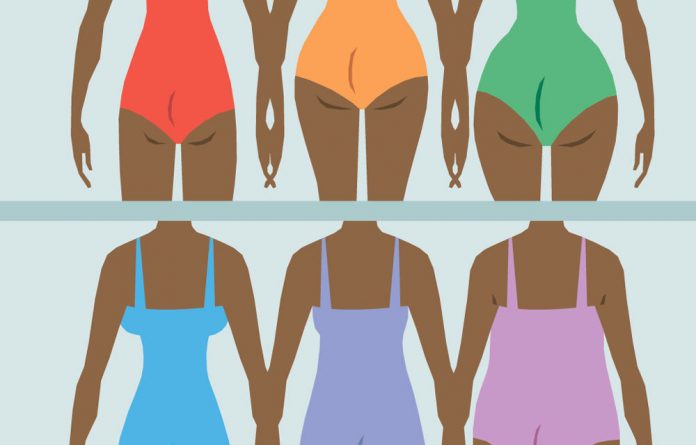 Being young, entering the gauntlet of supposed adulthood and still feeling good about yourself is a tricky task — especially when you’re a woman. We chew the fat over the prevailing narratives about women’s bodies.

Refiloe: I feel like our bodies tend to be a way of representing us before we even speak.

Youlendree: Ja, and a lot of the time we can’t really control exactly how our bodies look.

Y: It’s usually those things that you can’t control that people fixate on. It’s what they think you should look like. So, being a cisgender woman [someone whose gender identity corresponds to their birth identity] but not conforming to a rigid role, you get comments like: “If you’re a girl, why don’t you look like a girl?”

R: It’s kind of natural because humans judge each other based on appearances. As a woman, it just seems like the shape of my body becomes a factor in how I’m perceived — or how I perceive my perception. The whole narrative of women being “too big” or “too small”, “too curvy” or “too skinny” is so outdated. You’re damned if you do and damned if you don’t — but you don’t choose your shape.

Y: And the way in which our bodies are policed every day — just walking down the street — it’s ridiculous. And it’s one of those uncontrollable things. I’m small, so my curves are amplified. So if I want to wear a low-cut top I know I’m gonna get comments, which is why I don’t. And that’s the way I censor myself before that even happens.

R: And I think that happens for all women, no matter what their shape. It’s gonna be something — your boobs are huge, or you have no boobs. It just affirms this thing that women’s bodies are for public consumption.

Y: It serves the needs and purposes of everyone else.

R: And it’s just completely okay for it to be scrutinised — it’s normalised. It almost belongs to men — from a heteronormative perspective, anyway. Or it will ultimately belong to a man, even if it’s just for the purpose of scrutinising. If it wasn’t for that, I don’t think I’d care that much — I mean, we all have insecurities but I don’t think my lack of “curves” would be such a point of conflict for me if I didn’t feel like my body was subject to criticism all the time.

Y: That judgment can really come from all sectors — from family, your partner, even a child. As a child, you may believe bodies need to look a certain way because of the ways we are indoctrinated to think about gender and beauty.

R: It’s true, it can come from a variety of places. For me, it doesn’t come from my mom — she’s always said: “You’re beautiful as you are and you are enough as you are.” But I do struggle to believe that fully — she has big boobs and a big bum. But then I come into contact with other family and I literally get comments like: “You look like a boy — where are your breasts?” There’s nothing I can do about that, so it makes me disappointed in my body for performing my femininity in a way that’s not acknowledged.

Y: Ja, it also comes down to the performance of gender — I had the opposite experience because when I hit puberty, my breasts started growing. You could already see: “Whoa, now this is a girl child. This is not just a flat-chested, tree-climbing hooligan …

R: That would be me, hello!

Y: But then all of a sudden there were these signifiers of womanhood and I thought: “I’m not okay with this.”

Y: So, I would wear baggy clothes to try and hide my body. And I would get people saying: “You look like a boy.” I didn’t want to look feminine but there I was.

R: I know very well that I am still a woman. But then when I hear that “a real African woman” has a big bum and boobs, where does that leave me? Does that mean I’m undesirable? Unwomanly?

Y: All this boils down to is that men and patriarchy are trash.

R: But it’s not like I base my worth on the opinion of patriarchal men because they’re wrong about a lot of things.

Y: Yeah, it’s just this noise that stops you from living your best life. And having a loving partner helps loads when you’re tired of fighting negative body perceptions by yourself.

R: Well, I’m single, so I guess it’s about self-affirmation — even if I’m a flat-assed girl in the Age of the Booty …

Y: Which isn’t always genuine, anyway — we can celebrate thick thighs but not a muffin-top and stretch marks? There’s a double standard at play. I think being kind to your body and loving it is the key.

How to get women’s voices heard in African politics

Getting women into politics is only half of the challenge. The second half is to make sure that women are not only seen, but also heard
Read more
Opinion

Despite the advance of feminism, there’s still an ugly truth about keeping smooth

Females are still being told what’s in vogue – such as shaving pubic hair – and it’s less about being womanly and more about trying to stay girly.
Read more
National

What department of women? For many, it may as well not exist

Many people don’t know it exists, and those who do don’t feel that it is improving their lives.
Read more
National

Coffee delivers a kick to the hair follicles