​We need to reclaim the headlines

This year headline stories were about the same small cast of characters. Every week new titbits were added to the stories; micro-developments related to the president, his friends the Guptas and the clique of people who have taken it upon themselves either to protect or criticise him.

Every week on the radio and in the newspapers it was the same names and faces. Journalists sketched two storylines for us: one about the Guptas and another about the people and institutions that seem to have done the bidding of the Guptas. The news became maddeningly predictable — the longer the period of political stasis lasted, the more our situation seemed both gripping and unbearable.

Over time, as the news about the dealings of the characters involved became increasingly absurd, it was hard to ignore the dissonance between the stories the headlines carried — about President Jacob Zuma, the Constitutional Court, the National Prosecuting Authority (NPA) and Eskom — and what was happening in the lives of the other inhabitants of the country.

The illicit relationships of Zuma and his acolytes, and the efforts of those arrayed against them, are of great importance.

But it seemed that often the media did not yet fully understand how to link its coverage of the political drama in which Zuma was a central character to the fortunes of South Africans who deal with poor education, ill health and violence on a daily basis.

Instead, the assumption underlying news coverage was that democracy, especially the institutions set up to safeguard it, was in danger; or that the economy, the savings of the rich and middle class, were under threat.

The missing stories made it possible for Zuma’s backers to suggest — with some success — that the media was interested only in corruption and not in the everyday concerns of people. To back this claim up, they could point to the copious column centimetres dedicated to Nkandla.

The dichotomy is false — one can be interested in both the scandals surrounding Zuma and the social problems facing our country’s most vulnerable citizens. Part of the trouble with the political distraction is the scandals deepen our social crises of ill health and poor education and inefficient service delivery. 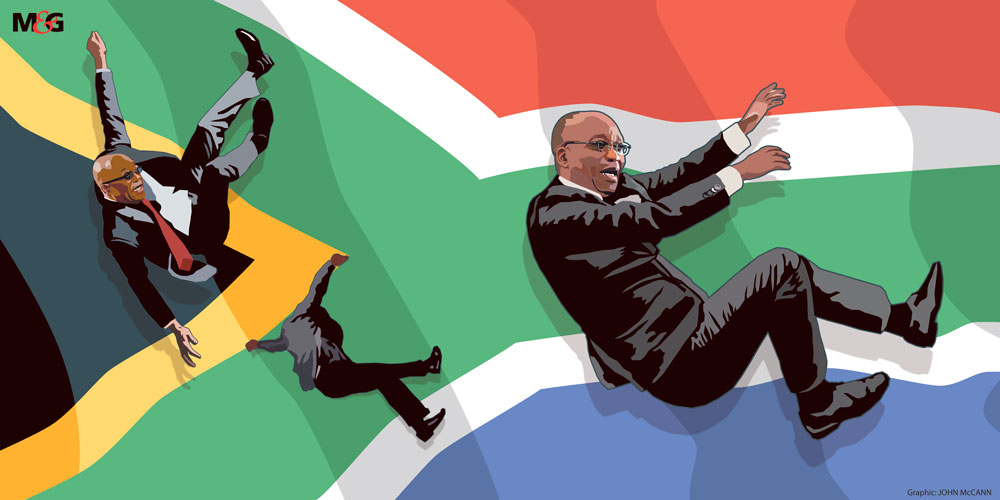 This is not simply because tenders go to unqualified people. The more sinister and heartbreaking problem is even the most mundane services such as drought management plans are subject to factionalism. The political dramas involving the president aren’t simply a distraction; they have become a blockage in terms of social development.

At the same time, precisely because there is so much political nonsense being done on a daily basis, crime, education and health stopped being the big stories.

So we find ourselves in an increasingly untenable situation in which the media — which play a crucial role in a democracy and in safeguarding people’s rights not just to freedom of expression but also to food security, water, sanitation, health and education — cannot do a crucial aspect of their job because of the horrible state of our politics.

It would be easy to recap the big stories of 2016 — the Constitutional Court judgment on Nkandla, the public protector’s State of Capture report, Deputy Finance Minister Mcebisi Jonas’s revelations of the Guptas bribe bid and the NPA press conferences about charging Pravin Gordhan — but it is far more important to focus on the stories that may have been reported but didn’t get adequate attention.

It is worth reminding ourselves that in 2016 — despite the “urgent” press conferences called by the ANC Youth League and the Umkhonto weSizwe veterans to defend Zuma; despite the state capture report pointing the finger at the president even though millions of rands were spent on lawyers to defend Zuma; and to charge the finance minister, one can only surmise, to defend Zuma — there was also this: a murder on average 51 times a day in our country.

Every day that parliamentarians rallied to stop votes of no confidence in the president, or to marshal their votes in favour of impeachment, 452 people were assaulted.

On the day in April, when the president sat with his lawyer and evaded public protector Thuli Madonsela’s questions about his relationship with the Guptas, 142.2 rapes were reported. It’s a fraction of the number of rapes that were actually perpetrated because so many survivors and victims have given up informing the police about the violations.

This year, as in every other year in recent memory, those bright-eyed children who started school in grade one were not guaranteed a place in the graduating class of 2028. Less than half of those who started grade one in 2016 will complete grade 12. Too many children born this year will be casualties of a distracted and incompetent political class — victims of a president so obsessed with maintaining power that it is hard for him to hold his Cabinet and senior officials responsible for delivering education. This is not to say officials are not working hard. It is to state what is painfully obvious — that the inspirational and rigorous leadership required to move our children from one of the worst-performing systems to one of the best is lacking. This vacuum is exacerbated by a preoccupied leadership too busy fighting political fires to untangle the knots and set the system right.

If you turn to health the picture is also bleak. Although we have made significant (though not irreversible) progress in extending treatment to millions of South Africans, in 2016 2 000 girls and young women aged 15 to 25 were infected with HIV each week — a rate two-and-a-half times that among boys and men of the same age. This no longer makes front-page news in part because of Aids fatigue but also because there is no longer the space. Politics has hijacked the national social agenda.

And so the year ended exactly as it began: with a wave of human tragedies that serve to remind us that, although politics is important, it exists to serve people, not to operate above them.

In October, Fezeka Kuzwayo, the woman who endured abuse and vitriol when she accused Zuma of rape in 2006, died. Two months earlier her courage had been celebrated by a new generation of activists. They stood in front of Zuma as he announced the official results of the local government elections and staged a silent protest. It was fitting that she lived long enough to understand the mark she had left on women organising in South Africa.

A month later, a video surfaced of two farmers who had assaulted a young black man for “trespassing”. They put him in a coffin and threatened to put snakes in the coffin and to set it alight. Those case will proceed in early 2017 but, as usual, the footage was the tip of the iceberg. Those farmers have been terrorising black people in the area for years.

Then, in early December, 22-year-old Noluvuyo Swelindawo was murdered in Cape Town. She was an out lesbian, and her death mirrored that of Motshidisi Pascalina who disappeared in Gauteng almost exactly a year earlier on December 16 2015 and whose mutilated body was found a few days later.

The deaths and the humiliations of black people who are poor and/or queer and/or women, serve as grim reminders that violence and poverty and homophobia and sexism and racism continue to be defining features of our social relations.

The fact that South African media and political outrage are channelled towards the protection of key democratic institutions ought to make every South African proud. Our willingness to defend the Constitution and the organisations for which so many died is exemplary. But the fact that we are not as vocal about defending the rights and lives of the people the Constitution exists to protect ought to shame us.

The political shenanigans will continue next year, but so too will the humiliations and the deaths and the slow, steady violence of poverty. Homophobia will not disappear and there will be more lesbian lives snuffed out. There will be more farmworkers abused — with or without cameras present.

It is evident that a Zuma presidency will only deliver more of this sort of mess. If the ANC will not unseat him early, then it is up to the media and the citizens of this country to focus their attention on the social crisis he has wrought. Perhaps it is time to leave politics to the politicians and let the rest of us reclaim our government.