​Commodities back from the dead 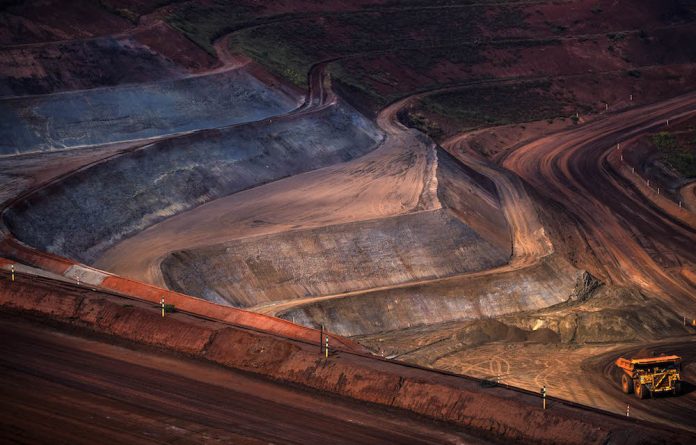 For the past two-and-a-half years, calling the bottom of the commodities price cycle was taboo. Depressed prices and unusual market conditions saw even the most seasoned of market watchers shy away from any pronouncements that the worst could be over.

But, as prices continue to lift steadily, confidence is growing that indeed this is the case.

The World Bank, adding its voice to this view in its Commodities Market Outlook released this week, forecasts that industrial commodity prices will surge in 2017 on the back of tighter supply and stronger demand.

It’s good news for the global economy in general and for commodity-dependent nations such as South Africa in particular.

“Prices for most commodities appear to have bottomed out last year and are on track to climb in 2017,” said John Baffes, a senior economist and lead author of the report.

Copper, zinc, tin and nickel prices have made considerable gains in recent months. The chrome price has also rocketed. The JSE Resources 10 index is up 50% on this time last year, with resource companies such as Anglo, Kumba, ARM, Assore and Glencore trading at 12-month highs. 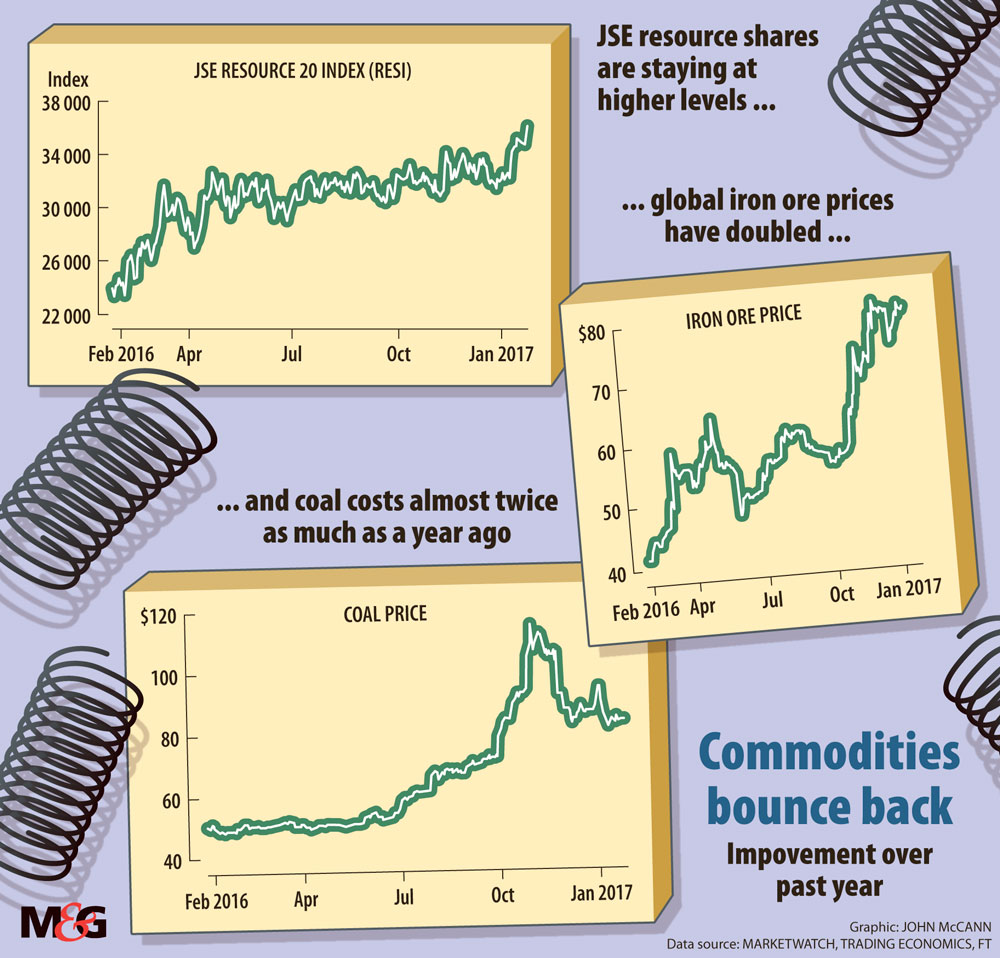 The about-turn in commodity prices has also helped to strengthen the currency. The rand is also performing well at present, dropping from 14 to the dollar over the festive period to near 13.20 this week.

In October, the World Bank forecast that metals prices would only rise 4% in 2017 but its latest report anticipates an increase of 11% on the back tightening supply and higher demand from China and other advanced economies.

Less is expected of the oil price. The World Bank forecasts it will stay at current levels of $55 a barrel for the year, although it notes this is still 29% higher than the average price reached in 2016.

This, it says, is based on an assumption that oil-producing nations will make good on their commitment to limit production.

“I don’t like bottom fishing,” said Rene Hochreiter, a mining analyst at Noah Capital. “But the iron ore price, that bottom was in the middle of 2015; platinum prices bottomed in October, and gold prices have even bottomed.”

The platinum price has gone from $911 at the beginning of the year to near $1 000 at present. The gold price, which does not tend to follow the commodity price cycle, is also thriving and has gone higher than $1 200 for the first time in two months.

But the World Bank does not expect gold and platinum to be part of the commodities good news story in 2017. Instead, it says, precious metals prices are projected to decline in 2017 as benchmark interest rates rise and safe-haven buying ebbs.

But rising prices of some commodities usually bodes well for all, Hochreiter said. “They all sort of follow each other. Some lead and some lag but they generally follow the same trajectory over 12 or 18 months.

Mamokgethi Molopyane, a mining analyst at Creative Voodoo Consulting, says the optimism over commodities is being buoyed by a slight economic recovery overall. “Compared to last year, 2017 is already looking better. That alone has encouraged the markets towards commodities,” she said. “There’s sentiment of ‘Phew! We are finally out of crisis collapse period’, as it tapered off towards the end of last year.”

Azar Jammine, the chief economist of Econometrix, said classical economic drivers of supply and demand are lifting commodity prices. “They are why you have cycles in the first place. When prices fall to below the price of production, you get closures of mines and oil fields, and a change of crops. That in turn produces change in the cycle.”

Optimists are also betting on a rise in demand for commodities driven by stimulus measures in China and the United States. On Monday, the global ratings agency Fitch said, although stimulus measures helped China to register 6.7% gross domestic product growth in 2016, they were funded by credit and pose a significant risk to economic stability.

The rebound is good news for commodity-dependent African countries. Sub-Saharan Africa, dubbed the new growth frontier not too long ago, registered only 1.5% growth in 2016. For South Africa, although it has diversified its economy to be less dependent on mining, the rebound in commodity prices “is still a big deal for us”, said Jammine.

A special focus in the World Bank report showed how the depressed commodity prices hit commodity-exporting emerging and developing economies hard, slowing investment growth, which declined from 7.1% in 2010 to 1.6% in 2015.

“Investment weakness, both public and private, hinders a range of activity in commodity-exporting emerging market and developing economies,” said Ayhan Kose, the director of the World Bank’s development prospects group.

Some of it is about psychology, Jammine said. “We are still seen as a primary commodity producer and, even though gold now forms a small part of our exports, when the gold price increases, money seems to come back to South Africa.

“It’s a reversal of a trend we saw a year ago,” said Jammine. “People think the only reason the rand fell end of 2015 was because of Nenegate [when the finance minister was unexpectedly replaced with a little-known parliamentary back-bencher, which caused markets to plunge]. But it was also within a general bloodbath in commodity prices where capital flowed out of those countries seen to be commodity producers.”

But there is reason to remain cautious about commodity prices, Jammine warned. “If prices go too high, people stop buying. For example, there are many who believe the iron ore price, which rocketed over the past few months, is overdone now.”

The World Bank report singled out iron ore prices, which almost doubled in the year ended December, as having raced ahead of fundamentals. Although prices soared on strong steel demand in China, supply constraints and low stocks, prices softened into January, with China’s inventories rising and seasonal demand expected to weaken, the bank said.

Iron ore exports from the major producers rose to record levels in November and new low-cost capacity is expected to come on line this year. “These considerations, along with rising scrap supply and an expected slowdown in China’s steel production, are expected to pressure prices downward and force high-cost production to close. Key uncertainties are the strength of steel demand and iron ore production in China.”

But Hochreiter said the price could be supported, as some of the larger iron ore producers have not invested in capital equipment and so would not be ramping up production.

He said the volume of supply of iron ore to China has remained steady since 2007. But increased supply from elsewhere in the world suggests China has cut back on its own production volumes.

Ebola in the Congo: a forgotten conflict became a danger to world health