Low-key for the woke gang 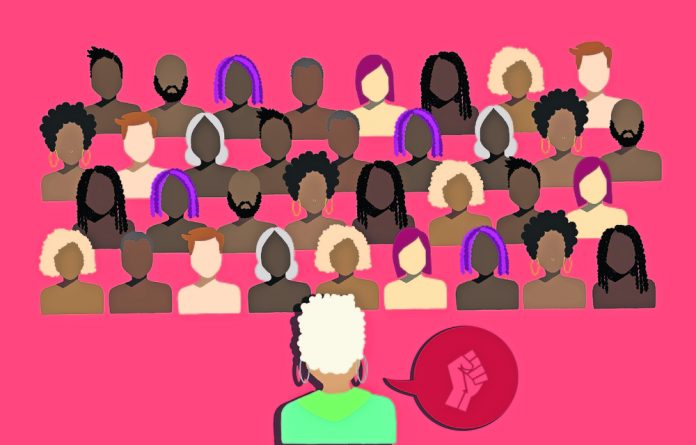 On Thursday March 9 2017, I attended the public lecture In Conversation with Ericka Huggins, an early member of the Black Panther Party in the United States, organised by a loose collection of activists and held at the Tshisimani Centre for Activist Education in Cape Town.

Upon arrival, I felt like I had stepped into a Yours Truly café promo video, with the common denominator in the space being OG Old Skool Vans coupled with various iterations of ombre natural hair, giant silver hoops and, of course, plenty of chokers and septum piercings. The usual mix of High Snobiety street style and 1990s vintage signalled this as student vaabs, but there were enough pretty young things for this to be forgivable, on the eyes at least. When Buhle “The Babe” Ngaba breezed in, I knew this was low-key, a high-society event for the woke gang.

Huggins was late for her own party. Not cool. Luckily the event was well organised with tea, coffee and hot cross buns, so I was instantly placated. But when it eventually got under way, I was immediately disappointed. Why did the flyer say she was a founding member of the party if she joined a year after it was founded? I geddit, I geddit, we all know Huey Newton and Bobby Seale were the main kahunas, and it’s a big deal that she founded a chapter known for the infamous New Haven Black Panther trials, buuut it’s not nice to feel boefed. It’s also not nice to feel patronised.

Huggins began by explaining why she was late (exploring the country) and then asked: “Have you been to Langa? Have you felt Soweto?” GTFOH was naturally my gut response, but then I checked my “positionality” (more on this buzz-word later) and reminded myself that I was raised to respect senior citizens. Auntie Ericka is almost the same age as my granny, and nearly as graceful, which is a feat in itself.

She looked like a poem. Her lithe ballet body was draped in teal silk and turquoise satin with gorgeous clunky silver rings adorning her lovely hands as neatly as the pretty pumps on her feet. And as she got into her recital, she warmed the room, her words sashaying around softly, vivid vignettes like stanzas of a life I couldn’t help but want to know more about.

I did not want to hear: “If you are black, I am sorry that apartheid happened and is still happening.”

If apartheid was still happening, we would not have been gathered en masse and it was that comment that made me feel like, aww man, did this woman come here on safari, funded by a speaking engagement to gullible students? Ja, né, Americans.

She did, however, redeem herself from the misinformed Nostalgia Ultra, first by promising not to talk about South African politics, then by discussing uninterrupted oppression as something cellular, passed along in utero before moving on to what we were all there for: Black Panther anecdotes.

I did not know that, of the 103 historically black American tertiary institutions, three were originally created for slaves (she attended one of them). I also did not know that two-thirds of the Black Panther party was female. I appreciate titbits like that and I really appreciated her stressing the importance of mentors. But the coolest and perhaps most important part of her talk was how she located the Black Panther movement into a broader zeitgeist of revolutionary change through coalition-building.

According to Huggins’ recollections, it coincided with feminism moving away from white middle-class women to include different races and classes, what was then simply called “the gay liberation” movement, opposition to the Vietnam War and movement around disability rights.

This is important because it made me do a quick audit of the kind of issues I want to talk about so that they can inform and galvanise my work. The first that came to mind were spatial and economic inequality, financial literacy and, of course, land reform. For that alone, I am very grateful for this event. But there was more in store.

The Black Panther Party for Self-Defense fought to establish revolutionary socialism through mass organising. But first and foremost, it drove welfare-motivated, community-based programmes without grant funding. According to Huggins, the success of this programme was because it was motivated by generosity of spirit. This cannot be stressed enough. Social justice can only be sought successfully if it is done sincerely.

Her parting shots were the silver bullets that we are all familiar with but still need to be reminded of daily. “Black is beautiful” must be the undertone of mental emancipation, and fashion. Racism is ridiculous. Don’t be shy to cry. Self-love is the most fundamental imperative. Eat well, sleep well and make sure you have one or two people in your life who love you a whole bunch.

The Q&A session was a snapshot of contemporary concerns of conscious middle-class South Africans, trying to learn from America. How can oppressed and oppressor sit together and talk about pain? Why don’t brown, Latino and everything-else in America all identify as black, and how can that be fostered for co-ordinating efforts? How was patriarchy dealt with in the Black Panther Party?

I was most captivated by Kealeboga Mase Ramaru, the most formidable black feminist activist on the block, encouraging disruptive dialogue while ensuring that all comrades in the space were comfortable to share and learn.

Responding to the questions, Huggins proposed crucial questions when interrogating intentions: Who is in the room, what do they want to learn and how can we talk from heart to heart?

Other highlights from the discussion were questions from Mercia Andrews, mother of one of the hosts, Alex Hotz (aka grassroots power-team and the crème de la crème of community development in Cape Town), about how the Black Panther Party would have responded to US President Donald Trump and pervasive gender-based violence in society, had it still been active today.

This point was also important for making the audience realise that it was not comprised solely of young women. It encouraged a older woman to speak out about how she, as an “ageing activist” (her words), fought during her youth and now supports her daughter’s championing of the Fees Must Fall cause, but is often so daunted by words such as positionality and intersectionality that she shies away from engaging, for fear of saying the wrong thing because this new terminology is so foreign to her. It was a courageous thing to bring up and testament to the brave space created by Mase, Alex and Dominic Brown.

Huggins’ response was to ask, ask, ask, and constantly check your position and how it intersects with the place you find yourself in. Be aware of yourself and how you move through the world, because we are missing a beat if we’re governed by our own biases, whether it be ageism, racism, sexism, whatever.

My heart swelled with pride when my colleague Vumani brought up the issue of class, wanting to know how the Black Panthers dealt with this.

I was even more impressed by Huggins’s response: “The Black Panther Party was revolutionary because, at the time, people were not connecting class inequality and race but we didn’t talk academically to the people we were trying to help, or else their eyes would glaze over and they’d be like, see you at the next soup drive. Our conversations began by asking them, what do you need? How can we help?”

This is the crux of it all. Needs-based activism demands organisers who are attuned to what people want. And most young people want pop culture politics. Alex and Mase know this, which is why Twerk Fest was created, a fundraiser party where proceeds would be donated to queer students who are struggling financially.

Learners from Philippi High School were invited to this event and given the opportunity to talk about their fight for the school building promised to them aeons ago. Last year, police fired stun grenades at them for protesting over the lack of infrastructure at the school and, this year, they continue to be taught in a shipping container.

It was late in the night and the speaker was hella long-winded, but Mase had set the tone so well that nobody dared leave and everybody listened. We all left better informed about the most important movement happening in the city, country and world at large: the fight for the right to be heard.