The cruelty of deliberate forgetting 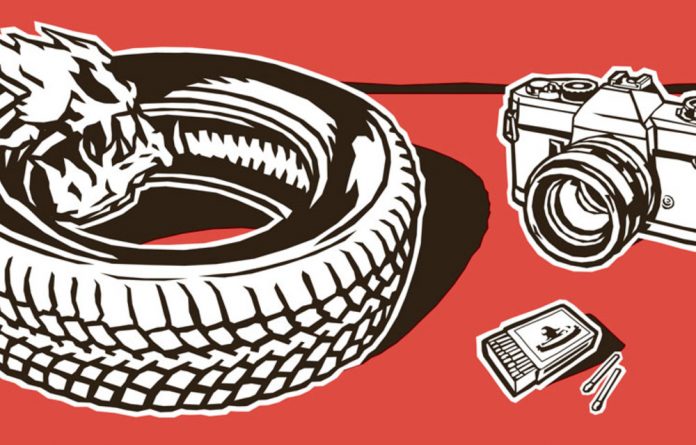 The 1980s — represented in the exhibition Between States of Emergency: Photographers in Action 1985-1990 — were a time when the country was terribly divided. The majority of the population looked at the state with fear and anxiety — our faces pinned to the ground by a military jackboot.

These photographs remind us of those desperate times. The economy had all but collapsed. The government was in disarray. The ruling elite was fractured.

There were protests around the country, and the military and police had invaded the townships and our homes. There is cold comfort in the observation that “those who cannot remember the past are condemned to repeat it”.

So, yes, more than 30 years ago I photographed death and dying during that dark and brutal period of successive states of emergency between 1985 and 1990. I should not be disingenuous and add hastily that I was an average reporter and a rubbish photographer.

I took the photographs at a time when I, personally, and we, the public, wrestled with conditions in the country. We were a deeply divided society teetering on the edge of an abyss of racial and ethnic violence and brute repression. The period when the pictures were taken was a time of intense state violence, censorship and persecution — part of decades-long policies of banning particular literature and photographs from being published or disseminated.

The clever people may insist that anything that is photographed represents something from the past and, simultaneously, undergoes a shift in time. The gesture of photography becomes both an act of preservation and of de-creation. It is documented evidence that something happened, or that someone died, but the photograph is also proof positive, somehow, of a life event and a lived past.

I read that the gesture of photography was different from those of other visual arts. Photography goes beyond the purely technical and becomes an intellectual exercise, which includes careful consideration, observation and learning to look at the same things that others do but to see it differently. With photography you learn to see relationships between shadows and lights.

With my brief experience and limited knowledge of social documentary photography, I get the sense that there is a powerful relationship between what you capture and your own sensibilities. It was never easy to photograph acts of cruelty and brutality.

More than 20 years after these photographs were taken, looking at them now helps me to understand in a very limited way the banality of power in the post-colony. I want to make the point that so much of what we are going through today is a mirror image of the obscenity and grotesquery of the previous regime.

As philosopher and political theorist Achille Mbembe points out, these excesses and grotesqueries include the elaborate inaugural ceremonies, acts of violence and terror, large-scale pillaging and elaborate protocols of showing deference.

In the wake of the catastrophic Cabinet reshuffle at the end of March, ANC Youth League leader Collen Maine told an audience of party loyalists that the fired finance minister, Pravin Gordhan, had to be dealt with in the way that activists “dealt with” the izimpimpi — informers, collaborators — during the anti-apartheid struggle.

His exhortation was jarring (on a very personal level — the level that the researcher or the journalist is required to leave at the door) and evoked memories of the times when, as a reporter and photojournalist, I witnessed cruelty and brutality, from the East Rand to Boipatong, Kigali, Mogadishu and Srebrenica.

In South Africa, I witnessed acts of violence against the izimpimpi — that horrifying method of “necklacing” — that shook the sensibilities of the best and the worst of us in the dark days of the 1980s. Hiding behind my viewfinder, I saw violence and brutality that was, at first, shocking, though after a while it became banal … until Maine called on party loyalists to deal with Gordhan in the way the izimpimpi were dealt with.

One of the cruellest and most brutal things I saw was a woman lying flat on the red earth, with large slabs of rock and concrete dropped on her head and body — and then she was set alight. What was her crime? She was suspected of being an impimpi. All I could do was photograph it.

In the weeks that passed since Maine’s exhortation to treat Gordhan as an impimpi, several questions come to the fore. How could the leader of the youth league forget the horrors, the cruelty and brutality and structural violence of our past? Has he forgotten the violent deeds committed in the name of the most honourable of causes? Or has the violence of the “good forces” received sacerdotal sanction because it was against a system of oppression?

At the base of these questions are some of the eternal struggles between remembering and forgetting. How or why do we remember or forget? Perhaps the most difficult of all is whether we should forget.

Of course, we should assume goodness in every human and imagine that Maine did not remember the violence against the izimpimpi, and that it was not intentional forgetting or because of the inaccessibility of memory. We can assume, in other words, that his statement was a case of the unavailability of (personal) memory being more powerful than collective memory.

This raises important issues about remembering and forgetting as we battle to forge a new society. Let me be clear: there were several flames during those fiery times — the attacks on so-called collaborators were but one of them. What we are dealing with now, though, is a leader of the state-party nexus of democratic South Africa who mirrors that grotesquery of the old regime.

One of the strands that can be picked from all of this is the way in which people actively and sometimes purposefully choose to forget. My sense is that there is a very thin line between types of forgetting.

By now, most South Africans are familiar with the expression that we should forget the past and just “move on”. Invariably, it is the erstwhile oppressor who would insist that subsequent generations should take from the past what was good and leave behind what was bad. It is an elision of prescriptive forgetting and a type of repressive erasure; a cross between destroying one set of mnemonic devices (or events) and simply putting new things in place to represent the present and construct new social identities.

It is not inconceivable that Maine’s comments were based on a structural or selective amnesia; the type of forgetting in which individuals choose to remember some things, and not to remember what they don’t want to.

What does remain clear is that his exhortations placed differential values on human life. Gordhan and Maki Skosana, the woman who was killed in the most cruel and brutal way, are considered izimpimpi and therefore less human. They have to be dealt with, possibly, in the cruellest and most brutal way.

To paraphrase Roland Barthes on authorship, the photographers whose works are displayed in this exhibition present the viewers with responsibility. The viewer is the surface on which everything that has been photographed is inscribed. What is captured in each photograph lies not in its origin but in its destination. So, as viewers, we may make of these photographs what we wish.

Nonetheless, the photographs are reminders of our past. The past, it is safe to say, is a time that carries guilt and the future represents only innocence — for no injustice has yet been committed.

With respect to the youth league leader, I will say this: it is difficult to imagine that those who reproduce unspeakable violence in the name of justice are anything more than thoughtless functionaries.

Ismail Lagardien is the executive dean of business and economics sciences at Nelson Mandela University. This is an edited version of a talk given at the opening of the exhibition Between States of Emergency: Photographers in Action 1985-1990, at the NMMU Bird Street Art Gallery in Port Elizabeth, which is on until May 19

The Portfolio: Boitumelo Motau on capturing a moment