Sons followed the script set by previous Security Branch cops who have testified at the inquest. Former apartheid police clerk Joao Rodrigues (78) and former warrant officer Neville Els (82) testified under oath and subpoena in previous weeks that the only torture of detainees they knew about was in the newspapers.

Taking the lead from his former colleagues, Sons told presiding Judge Billy Mothle yesterday: “I did not know about assaults”.

He claimed he had only heard about torture in newspapers at the time. Sons was called to testify at the Timol inquest because he is believed to be a “notorious” torturer who was based on the 9th floor of John Vorster Square at the time Timol died. Timol, a member of the SACP, fell from a 10th-floor window of the building in what the police alleged was a suicide.

His family believes he was severely tortured by the Security Branch and then murdered.

Four hours after Sons completed his testimony, Duarte wrote that during apartheid, Sons had come into her house and harassed and assaulted her family members. Duarte’s family were prominent anti-apartheid activists in the ANC, Umkhonto we Sizwe, and Azanian People’s Organisation (AZAPO).

“Seth Sons has a politically expedient memory. He forgot that he made me kneel next to my brother Achmat [Dangor] as his goons from the SB searched our house for 6 hours,” Duarte wrote in a note.

“He refused my grandmother on the same day entrance to the toilet and she wet herself. He slapped my mother when she wanted to hug her sister who was handcuffed,” she continued.

Duarte released the note on Twitter last night, providing an informal testimony of what the truth the Timol family expected Sons to deliver.

#SethSons made me kneel next to my brother Achmat as his SB goons searched our house for 6 hours kneeling with hands behind our back. pic.twitter.com/V8iBSPuKAm

Timol’s nephew, Imtiaz Cajee, and his uncle, Mohammad Timol, told the Mail & Guardian on Wednesday that Sons had been infamous as being among the worst of the apartheid torturers.

Duarte backed up the family’s claims, recalling accounts of abuse that had been made against Sons. Her memory of detainees being forced to urinate on themselves re-tell the humiliation and suffering of activists in detention.

“You stood with folded arms as chairbacks were used as racks and as many of us were choked. Smacked kicked. You watched as pee ran down our legs because you made us stand for hours,” she said.

Sons testified yesterday that he had an office on the 9th floor of John Vorster Square at the time of Timol’s death. He was a constable, but later that year, in 1971, received a promotion that propelled him to lieutenant.

In his more than 30 year career in the apartheid police, Sons, a coloured man, became a lieutenant-colonel. He testified on Wednesday that he was the second highest ranking “non-white” apartheid cop. He had his own team of “non-white and coloured” police officers in the Security Branch who were tasked with investigating and interrogating anti-apartheid activists.

Sons appeared rattled and angry at times during the inquest, sometimes cutting advocates short as they asked questions. But he maintained that he did not “physically interrogate” detainees.

Duarte, however, had a different version: “You cannot say you did not torture, you were the torture master”.

The activists who remember

Closing arguments are expected to be heard at the inquest next week Thursday. The inquest began in June with its first sitting in Johannesburg. The second sitting has taken place over the past few weeks since July 28 in Pretoria.

Cajee says that the most exhausting testimonies have come from the former apartheid cops. The family, he says, expected them to be truthful, but their versions are a repeat of what police officers said in 1971.

In the course of his research to obtain evidence for the inquest to be re-opened, Cajee interviewed numerous anti-apartheid activists who, like Duarte’s family, suffered torture in John Vorster Square. In his testimony earlier this week, he paid tribute to Amina Desai (below), who was at one point known as the Indian woman who had been the longest-standing political prisoner of the apartheid regime at the time. 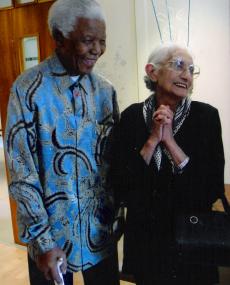 Desai was arrested because she generously allowed Timol to use her home as a base for his unground activity. She belonged to no anti-apartheid movement at the time.

“She did nothing for them to arrest her,” Cajee said.

She was arrested shortly after Timol, kept in solitary confinement for months after his death, and then sentenced to five years’ imprisonment. After her sentence was completed, she was forced to serve another five years under house arrest.

She died in 2009 at 89 years of age after battling illness. Cajee visited her when he could and her accounts of apartheid detention as well as the memories of others – such as Salim Essop and Dr Dilshad Jetham, who were also arrested at the same time as Timol – helped Cajee work to submit evidence to the National Prosecuting Authority that would them to re-open the inquest.

After closing arguments are heard, Judge Billy Mothle is expected to adjourn court until he makes his findings. The Timol family have said they will recommend that the NPA prosecute apartheid cops who were dishonest about their involvement in Timol’s death.