#SameWhatsappGroup: On the politics of memes

Youlendree Appasamy: So, bbz — memes are these things we seem to use a lot online. Black Twitter aka black people who use Twitter have made it popular 2 me … but what exactly is a meme?

Tiger Maremela: A meme is any viral cultural idea or symbol that people share between each other. In, like, the context of the internet, it’s any image, GIF, video or phrase that people use. I think, though, we’ve come to understand a meme as any image that either goes viral or even any image that is attached to a funny caption on social media. So think of the phrase “That escalated very quickly’’, or even the white blinking man GIF. Lmao, even your selfie could be used as a meme if it went viral.

YA: Ummm, no thanks! But I do hear ya. There’s always an undercurrent of humour doe. Like … viral memes are made 2 be funny. But what u n I find funny (memes about doggos in precarious situations or about laughing at your trauma as a way of coping and scary spongebob) is not what everyone finds funny. They seem pretty niche. Like, more often I see memes poking “fun” at women’s clothes and plain malicious shit about differently abled/disabled folks.

TM: Like, memes can be violent AF and this humour element that’s so NB to memes almost seems like a cloak for darker stuff? 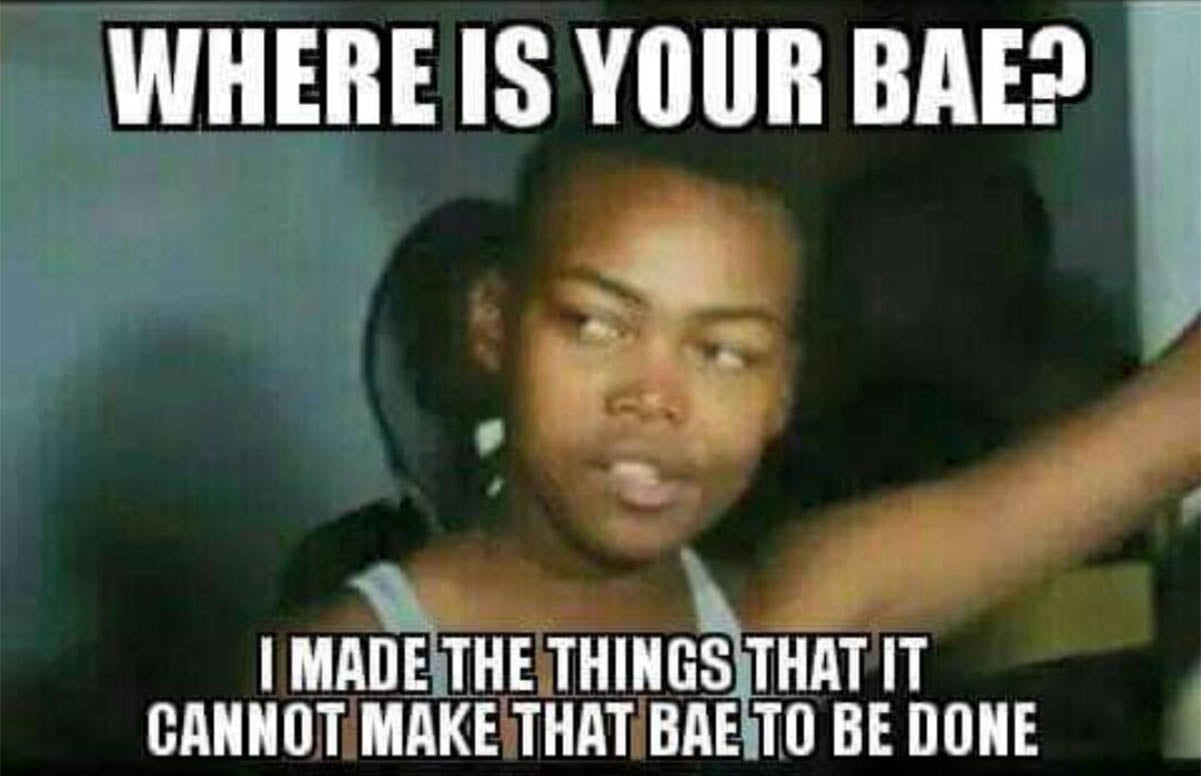 YA: Even times when we’re laughing at The Pots (which has been reworked into ‘Where is your bae?’) … what are we laughing at? I’m 100% sure some people laugh at the so-called improper English use there.

TM: Yeah, like, I think a lot of mainstream humour revolves around punching down at people and, like, specifically making fun of people? So it makes sense how this would translate on to the internet — one of the most unsafe spaces if you’re an “other”. So, like The Pots meme: Are we laughing at the fact the person couldn’t make the pots and didn’t communicate this fact (their dodgy work ethic) or are we laughing at their accent or use of English? I think The Pots went viral because of a very sinister, classist motive. Laughing at other people is so much easier to do when all you need to do is click “Publish”.

YA: Yeah, n people used the image outta its original meaning to voice alotta other things. In this case lack of a bae …

TM: Lmao, I feel triggered, because I have no bae. 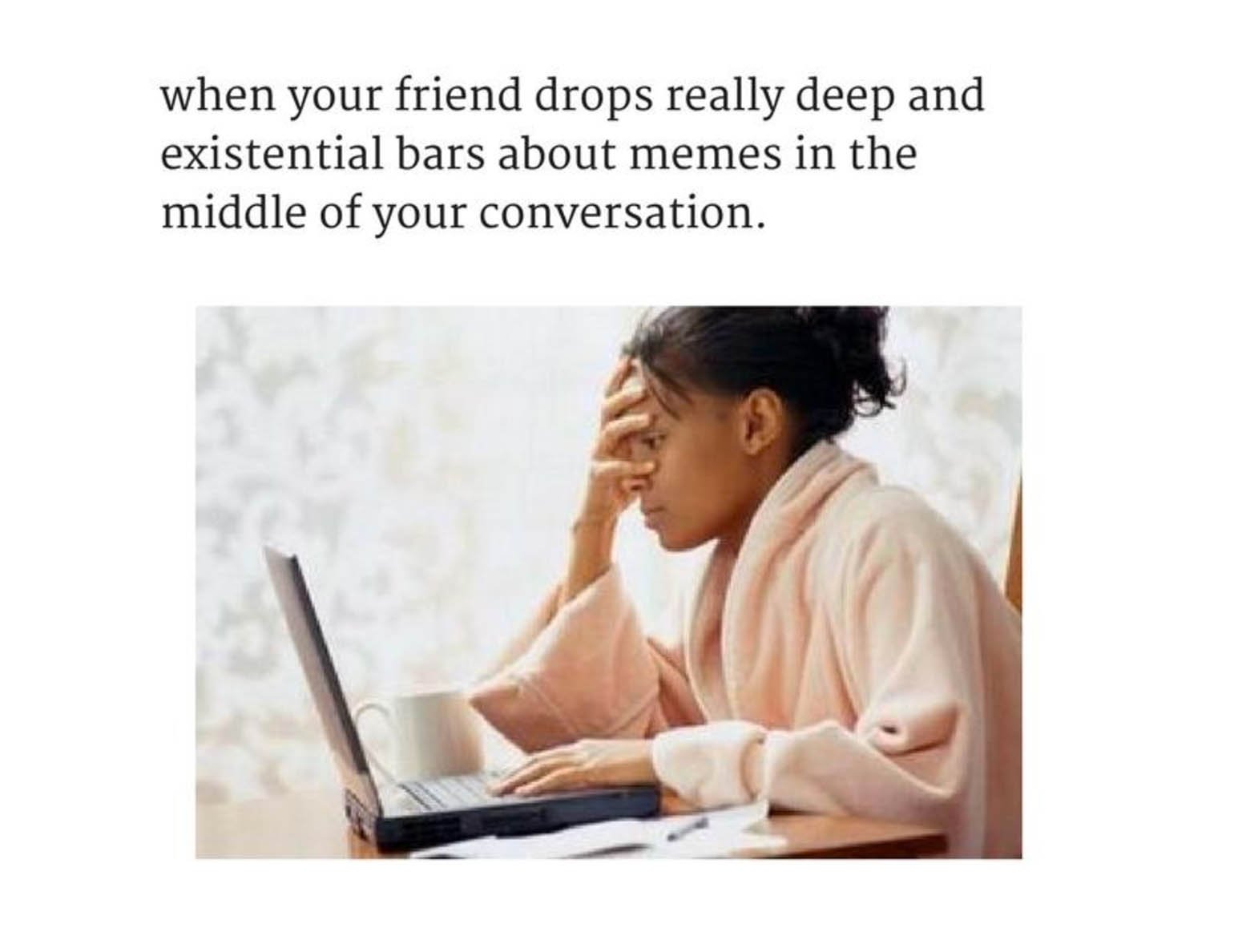 YA: Lol, no shade bbz. In a sense doe, I like how people, like, rework and remix memes to be more aligned with, like, their own thoughts n opinions. Not the alt-right doe. Neo nazis need 2 leave memes ALONE.

TM: Honestly, I just want to go around shouting that The Pots meme is anti-black. But what you’re saying about reworking and remixing is actually a really cool part about memes. The way you can add your opinion or your politic to a viral cultural symbol is a cool way of subverting things. It doesn’t always work out though. Look at how poor Pepe the Frog was co-opted.

YA: Yes, lol. Pepe was a fave. Seriously, meme culture is ever evolving and is the primary way us youths in South Africa communicate things online. And you can’t really get a firm grasp on their meaning(s), because it’s always changing. Like, your own ethics and ideas come into the reading or “heh??” moment of seeing a meme.

TM: This is me everytime a new way of thinking about a meme pops up on my timeline. 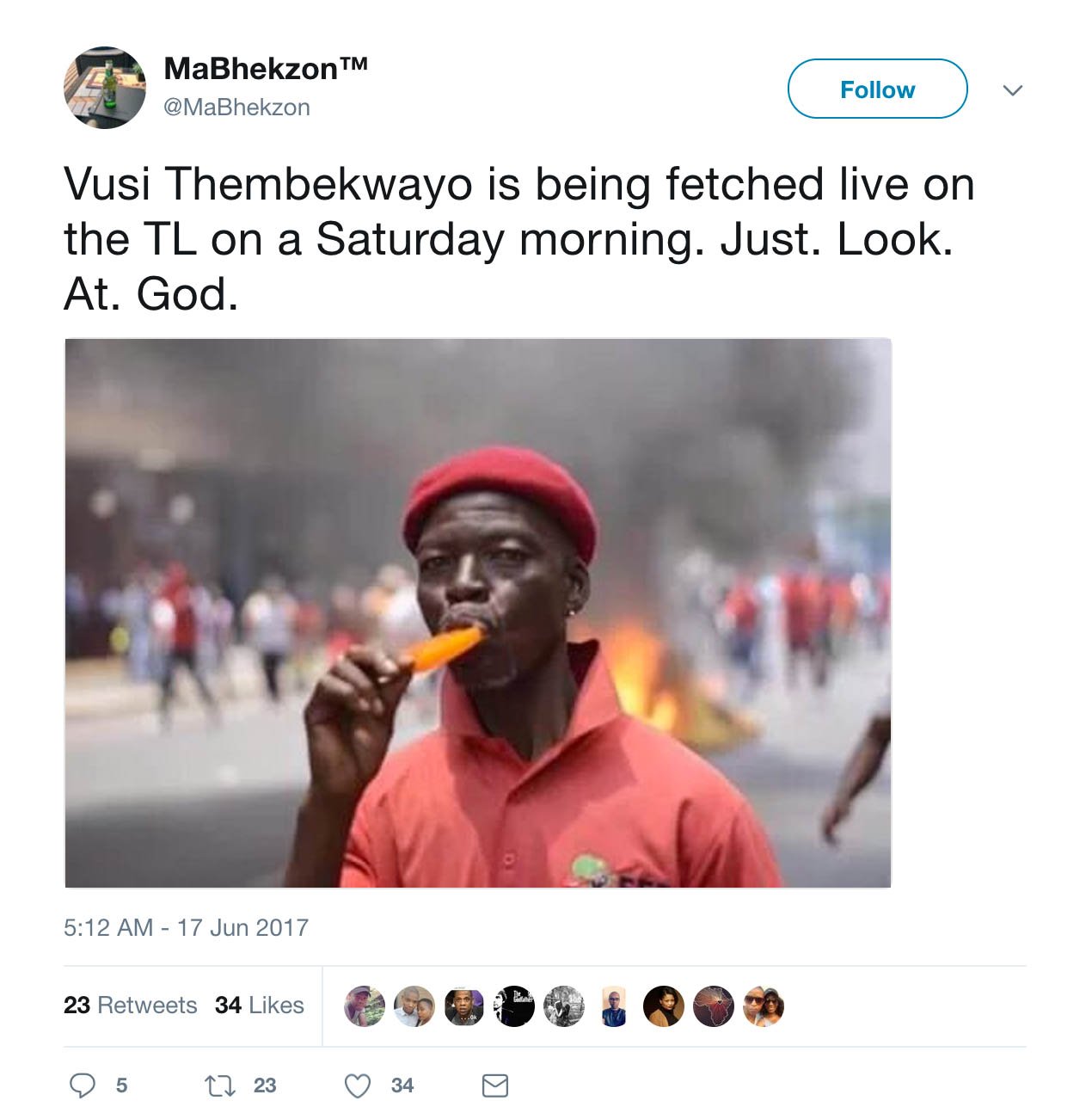 YA: Why would white people wanna use the brown skin emoji or represent their reactions with black and brown people? It really points to digital blackface. Yet people are in everything media wise, but they wanna use Joseline from Love and Hip Hop (LNHH) to represent their feelings? Nope.

TM: OK lmao, can we unpack the emoji thing? Because I personally use the brown skin emojis and often use a variation of them. But 1) when a white person uses a brown skin emoji I actually want to cancel them for blackface, but also 2) when white people use the default yellow emoji it’s actually such an apolitical stance. But it’s so weird how many white people are comfortable with using GIFs from LNHH or using #s from black culture, but the rest of the tweets are pure Taylor Swift white feminism. Digital blackface is an actual thing, because ANY emotion that black people show is always exaggerated and misconstrued in the face of whiteness. TBH, white people using black people GIFs touches [me in] my studio.

YA: Yes. Lol. I’m so confused because seeing myself reflected in internet culture is dope, but the hypervisibility of race gets transported wholesale 2 the internet. Like, I’m still idealistic about the internet, shem. I think it’s a place of infinite possibility in making yourself who you wanna be in ways that u can’t really do IRL. I mean, when I see memes ripping men to shreds I genuinely feel happier. This is me all day.

TM: The weird thing with being represented on the internet is that the visibility hardly ever translates into safety, justice or access. 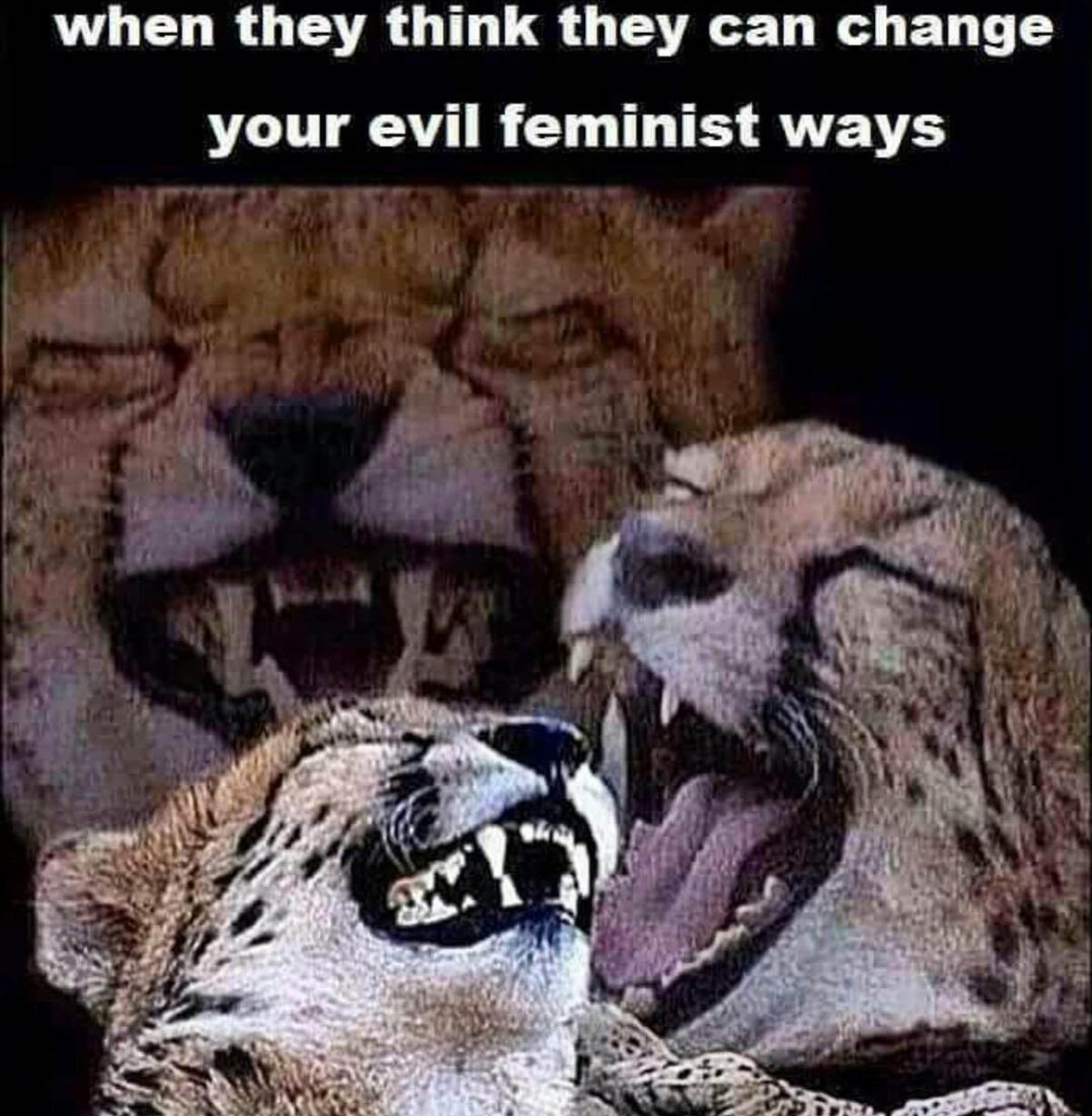 YA: Anywho. The politicking of meme culture is hectic. I saw this artist who works on the internet in interesting ways (Rafia Santana), who says memes are the language of the oppressed. Thoughts?

YA: That’s always a good ting. Oops, I got it wrong. They say: “Memes are the language of the unheard.”

YA: LOL meme ur feels bbz. That statement got me thinking about how the most cutting-edge, hilarious and inventive stuff online comes from femmes, black people — basically people who are always deemed on the edges or boundaries of society. And memes do a lot of work, you know. So it becomes a language of sorts, communicating the deliberately suppressed opinions and voice of “the unheard”.

TM: Oki, my hot take: memes can be used as a tool for the unheard. If you look at Black Twitter in the context of the United States and analyse how they have used social media as a space and platform for very lyrical and nuanced storytelling, for playing humorous games, for sharing news and updates in a way that is oblivious to whiteness — then yes, there is the potential of memes to be used in a way that speaks out/ speaks back/spreads the call for justice. Memes are some of the most tangible ways of politicking.

YA: It’s important to note the US internet environment, because that access and cheapness of data (!!!!) is not a thing for people here. You can’t just transplant ideas. They have their own texture and feel wherever they go. Like during the height of #FeesMustFall (FMF), those memes are rooted in our SA type of meme culture.

TM: Yes, pls can we talk about #FMF-related memes?

YA: This kinda encapsulates my feelings, lol. What did u think the most popular ones were?

TM: Lmao, that’s exactly it. I think the most popular meme that came from #FMF is that one with the person sucking on an ice lolly in front of a fire? So here’s an example from a few months ago. Two cishet men were beefing on Twitter and this was a user’s response.

I guess you could read it as the fire in the background of the meme representing the beef, and the person in the foreground is just there enjoying themselves, sucking on an ice lolly, not at all affected by the commotion.

YA: Yeah. The distance the internet provides leads to this image being used nje. The context in both situations seems to check out on a surface level … which is what makes it funny. But the emotions of the original are kinda distorted through the Twitter caption. Ya neh. 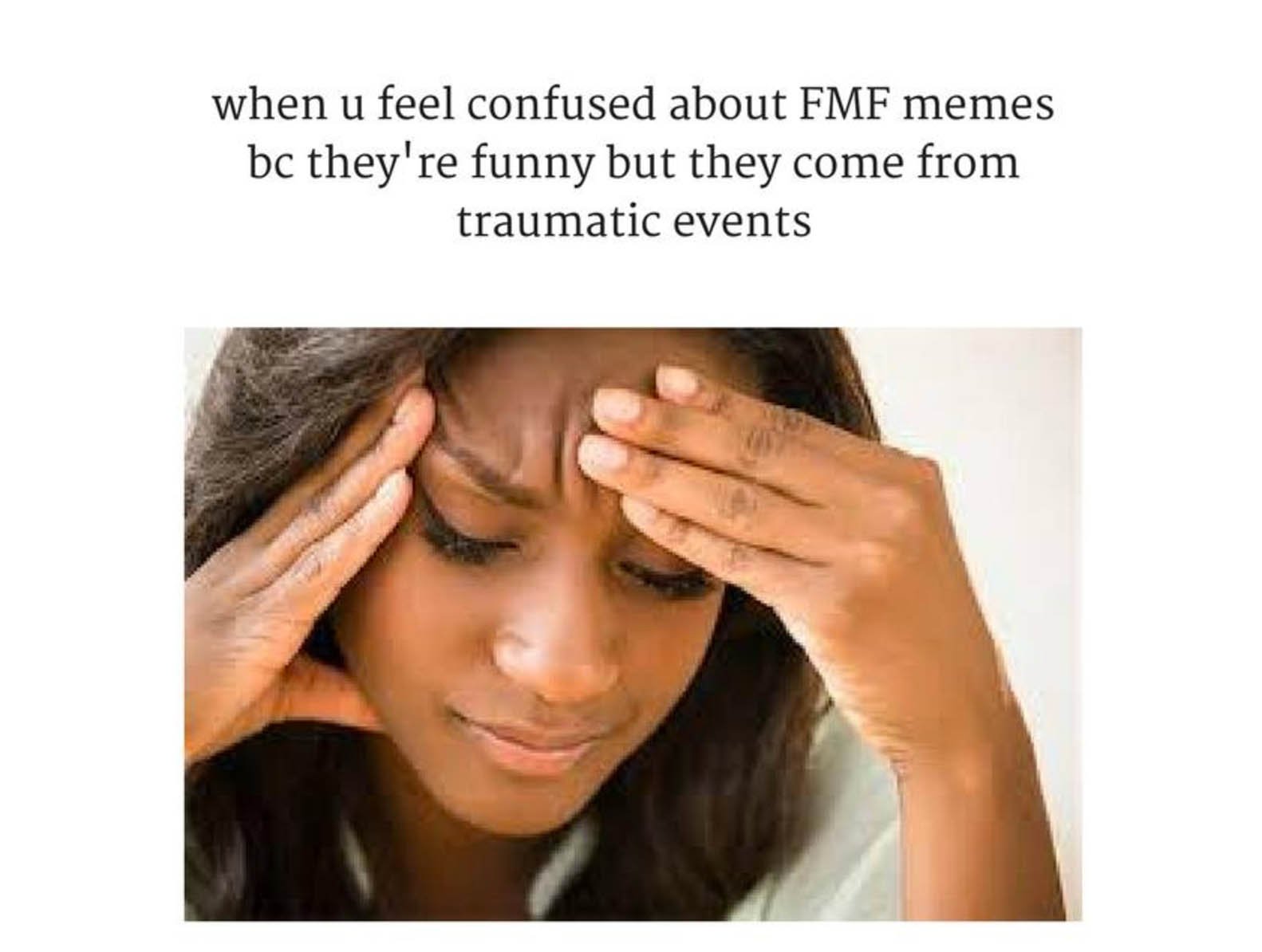 TM: And that’s one of the things I find most troubling about memes, right? How we remove the backstory and pain from the original image and essentialise the moment into something lol-worthy. Like, #FMF was pretty traumatic and so to invoke the imagery in that kind of way troubles me.

I’m not at all saying we can’t make jokes from our trauma, but it’s important for us to think critically about at whose expense we’re making jokes. Laughing and humour are valuable. I don’t know how I would have got through #FMF without friends to laugh with. But there was also a general understanding that being laughed at isn’t funny and does not give you room to laugh at others.

YA: Phew, this meme got me in my feeeeeeeeeelingssss.

TM: Lmao, that meme is hilarious. It’s really smart: it looks at how millennials are seen as fickle and entitled, speaks back at how older generations never really understood #FMF, but is also a way of bridging a gap between the trauma experienced by different generations. OK, so I think we’ve spoken a lot about the politics and potential of memes. If we had to do, like, the top commandments of safe-memeing, what would we include? 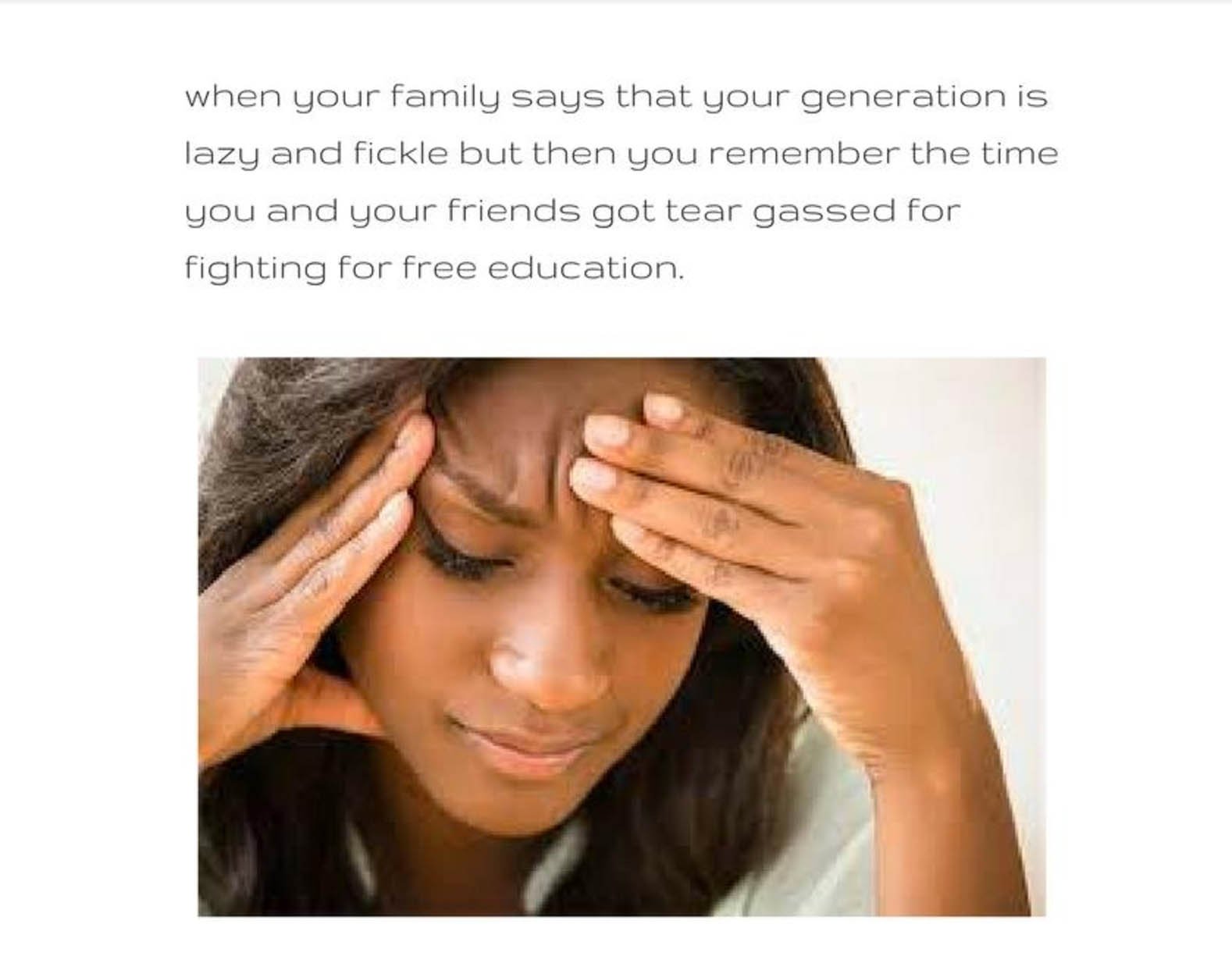 TM: 3) Also: “Am I perpetuating a stereotype or bias about a particular group of people?”

4) Memes are art. If your social media post was hung up in a gallery for your friends and family to see, would you be proud of it?