NBA preview: Is it still the Cavs and Warriors show?

The NBA season is about to roll around and, much like the game itself, the anticipation is at steam engine speed. The way this upcoming season is set up, though, it’s probably a good time for fans to remind themselves that it is the regular season that is beginning – not the playoffs and certainly not the championship finals. So, no, it is not time to dismiss the 28 other teams and say, “The Cleveland Cavaliers are beating the Golden State Warriors this year!” At least not yet.

Why? There have been too many changes to various championship-contending teams during the offseason. Indeed, “trade” was the NBA buzzword of the American summer.

To name a few standout Eastern Conference trades, four-time All Star Kyrie Irving was traded from the Cavalier team he won his championship ring with to the Boston Celtics. It was an eyebrow-raising move that he requested, which garnered much attention and hypothesising. In exchange for Irving, the Celtics gave up one of their prized players, Isaiah Thomas, who had just closed off a career-defining season in Boston.

And arguably most significant was the Cavs’ acquisition of three-time champion and 12-time All Star Dwyane Wade from the Chicago Bulls. But he’s best remembered from the Miami Heat where he won his championships with his bestie, the almighty king LeBron James with whom he is now reunited in Cleveland. Also joining that bromance is three-time All Star, former Bull-but-got-traded-to-the-New-York-Knicks, the much hyped Derrick Rose who hopes to finally break free of injury for enough time to actually live up to his name.

Over in the Western Conference, the division that got the biggest trade boost this summer, nine-time All Star and point guard Chris Paul moved from the Los Angeles Clippers to the James Harden-headed Houston Rockets in an attempt to perhaps get closer to conference finals. And four-time All Star and acclaimed defender Paul George joined the Oklahoma City Thunder from the Indiana Pacers. 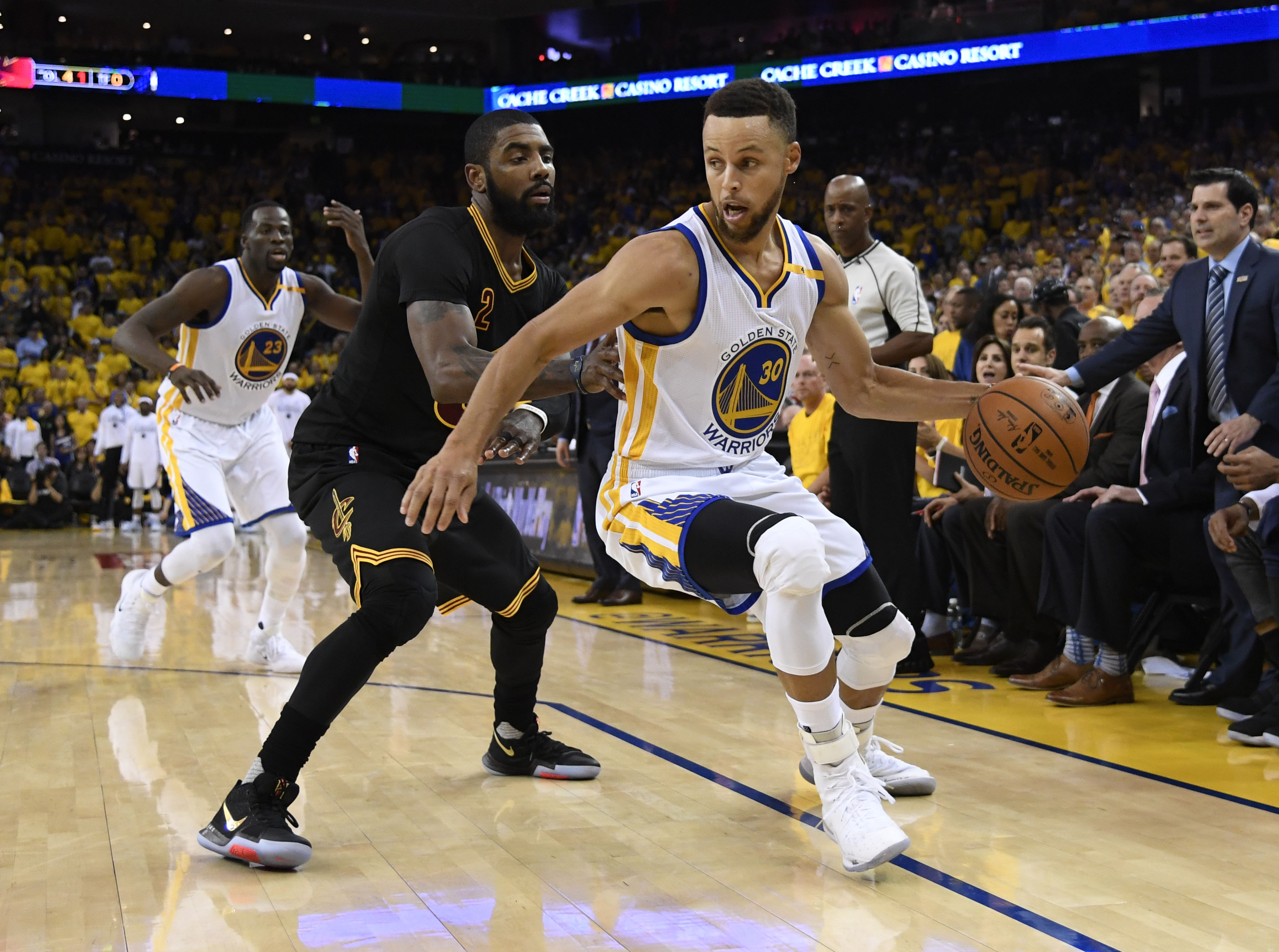 Kyrie Irving (left) has been traded to the Celtics.

Also traded to the Thunder, and quite possibly the trade that caused the most news, was 10-time All Star and New York Knicks beacon Carmelo Anthony. Whether overrated or simply overhated, this year finally seems like the year that Melo will actually get to contend for a championship ring – or at the very least get to conference finals.

This is because the addition of him and George to the Thunder, and most importantly to the electric score machine that is Russell Westbrook, gives OKC the fuel it needs to propel itself forward. And, yes, as many commentators have suggested, this gives the Warriors a real challenge for the conference title.

Those very golden boys of the league, the Warriors, personified their brotherhood approach to playing when the team’s prominent players agreed to take lower salaries to stay within the salary cap and avoid integral members of their team leaving in search of better deals. They also acquired charismatic shooting guard Nick Young from the Los Angeles Lakers (who now have the legendary Earvin “Magic” Johnson as their president of basketball operations) to add to the depth of the team’s bench.

Making the switch from East to West was three-time All Star Jimmy Butler, who was traded from the Bulls to the Minnesota Timberwolves – a move that further illustrated the energy injection received by the West.

All these changes between the top-contending teams point towards a 2017/2018 season that will seemingly be characterised by the push and pull of teams trying to establish player and team chemistry, and teams that already have familiarity and chemistry but need to work on maintaining and improving those qualities.

This means there’s pressure on a lot of teams – not just the Warriors or the Cavs. Of course the Cavs are out here looking for revenge. They want to redeem their loss against the Warriors last year. Of course the Warriors will go for a back-to-back win. Of course the Celtics and the sometimes overlooked Toronto Raptors will try to unseat the Cavs for the conference title. Of course the Thunder will want to beat out the seemingly unchanged San Antonio Spurs to go head to head with Golden State again. The Rockets are looking to take the West as well. The Timberwolves, for the first time in more than 10 seasons, are trying to get up there as well and who’s to say they won’t make it?

There’s an entire season that needs to play out and lots of changes to teams means the championship rings and Most Valuable Player titles are up for the taking. All the players and coaches can do is pray that the basketball gods keep their teams healthy throughout the season. Nobody wants their championship win to be forever asterisked as “only because Stephen Curry was injured”. Where’s the glory in that?