‘He restored my faith in estate agents.”

These were the unlikely words of a lawyer friend, who recently sold her house in an upmarket Johannesburg suburb.

Her initial enthusiasm about signing on with a low-fee, internet-based estate agency and bypassing a steep estate agent’s commission had evaporated after only 12 people had viewed her home in three months.

Frustrated, she signed up with a traditional estate agent. The property was sold within three weeks. 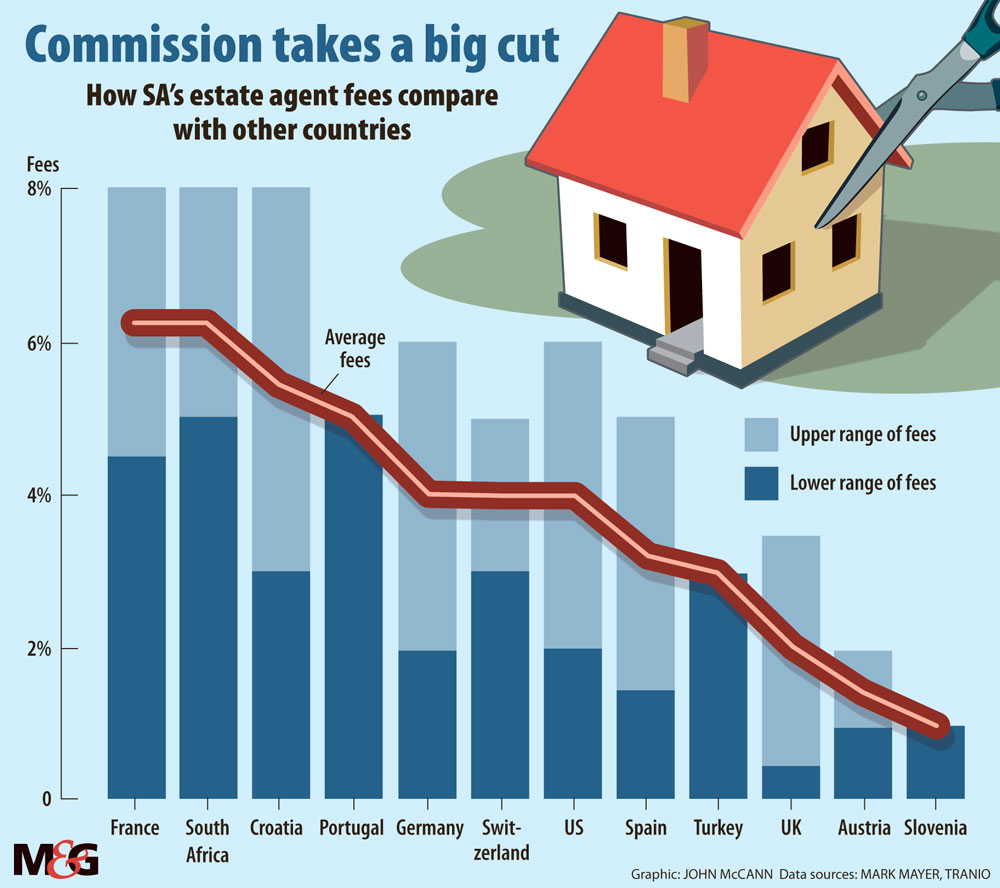 But there are some important caveats to her story. Most importantly, although her agent wanted to charge a commission of 7.5%, she negotiated him down to 4%. This is a marked reduction on the reported average of between 5% and 7.5%, including VAT.

But for every word of praise she had for her estate agent’s services, there are those who do not share her enthusiasm.

A brief online survey conducted by the Mail & Guardian elicited responses that ranged from they “sucked”, were “bad” and “shocking”, to “not worth the fee”.

A recent analysis by Mark Mayer, an investment specialist at Discovery Invest and published on Sharenet, suggests that South African agents’ commissions are among the highest in the world.

Using data from Russia-based real estate firm Tranio, the South African commission came in second only to France in a compilation of commissions charged on residential property sales in 20 countries.

Tranio said it compiled the range of agents’ fees using the most recent data supplied by its partners in those countries.

At an average of 6.25%, South Africa came in leagues ahead of the likes of Switzerland, Spain, the United Arab Emirates and Austria.

Mayer says in his analysis that estate agents “who aren’t prepared to restructure their service, offering to bring down costs, are going to be bleeding market share”.

Why are South Africa’s fees so steep?

Despite the widely quoted figures, industry bodies believe they are not as high as reported.

Jan le Roux, the chief executive of the Real Estate Business Owners of South Africa, said, although not published, commissions are closer to between 4% and 6%, with 6% being “the exception rather than the rule”.

When making international comparisons, it is also important to understand the idiosyncrasies of different markets. In some countries, fees are lower because the seller, rather than the agent, pays for all the advertising on a property, Le Roux said. “If an agent spends money on advertising, he still stands the chance of not selling the property and … of losing the expenditure.

“By moving this risk to the owner, a considerable drop in commission is feasible because the risk factor is removed,” he said.

The industry has also become the focus of greater regulation in a bid to professionalise the role of estate agents.

Nikita Sigaba, the acting chief executive of the Estate Agency Affairs Board, the regulatory body, said the professionalisation of the industry, which now requires among other things that agents obtain a nationally recognised qualification and serve a one-year internship under the guidance of a professional mentor, is “not without financial and human-resource costs and time constraints”.

Estate agencies are required to invest in training to ensure compliance with mandatory educational requirements, he said. They must also ensure that the agents in their service maintain the required skills and competencies for the duration of their career.

But, essentially, it is a commission-driven career, Sigada said. The industry does not regulate an estate agency’s fees or tariffs, which can be negotiated between the parties.

Increasingly, low-cost online agencies are offering an alternative to the traditional model.

The typical franchise model and the requirement to split fees between the agency and the agent is also a factor, particularly when the money earned on each property sold needs to cover the overheads spent on the properties that do not sell, he said.

PropertyFox, which was launched in April last year, charges 1.5% and has saved South Africans almost R10-million in commissions, James said.

The company is one of a growing number of online or virtual agencies that typically charge very low commissions, or flat fees, and allow sellers to deal directly with prospective buyers and show their homes themselves.

But, despite the emergence of these disruptive competitors, and the effect of the internet in general, Sigaba said, so far they have not had a lasting negative effect on the industry.

Instead, the rise of the internet and e-commerce services have simplified previously complex processes and made more information freely available to sellers, he said.

“The converse, however, is that the internet, and the accompanying use of e-technology, has ensured that many estate agency enterprises are now super-efficient.”

Although potential clients are more inclined to use the internet to conduct initial research, once preliminary choices are made, the human element can seldom be bypassed, the industry has found, Sigaba said.

“While commissions were, in some instances, reduced by internet estate agencies, this was not found to be a long-lasting effect and the situation has since very much stabilised,” he said.

Le Roux echoed these sentiments but said, nevertheless, “we are all watching the situation very carefully”.

Estate agents fulfil the role of negotiators so that “a willing buyer can get to the same point as a willing seller” and a transaction can be concluded, he said.

Ultimately the agents “must add value to a transaction when people pay them four, five and six percent, with no legal requirement to do so”.