England’s Premier League clubs have spent more money than ever in the January transfer window, with initial estimates suggesting they had reached £450‑million (R7.6‑billion) by deadline day.

Pierre-Emerick Aubameyang joined Arsenal from Borussia Dortmund for a club-record fee of around £56‑million on Wednesday’s concluding day of business, with Olivier Giroud moving to Chelsea as part of a complicated transfer jigsaw.

The previous EPL record for a January window was £225‑million in 2011.

Prior to Wednesday’s deadline in England, Tottenham Hotspur announced the signing of Lucas Moura from Paris Saint-Germain but Manchester City pulled out of signing Leicester’s Riyad Mahrez.

Top Premier League clubs have splashed out cash in the January transfer window, desperate to qualify for the top four, which guarantees entry into the lucrative Champions League.

Aubameyang (28) signed a contract with the Gunners until 2021, becoming Arsenal’s second big-name signing of the January transfer window after Henrikh Mkhitaryan joined from Manchester United.

His arrival will boost Arsene Wenger’s forward options after the departure of Alexis Sanchez to United in a swap deal with Mkhitaryan, but raises questions about Alexandre Lacazette’s future with the Gunners. 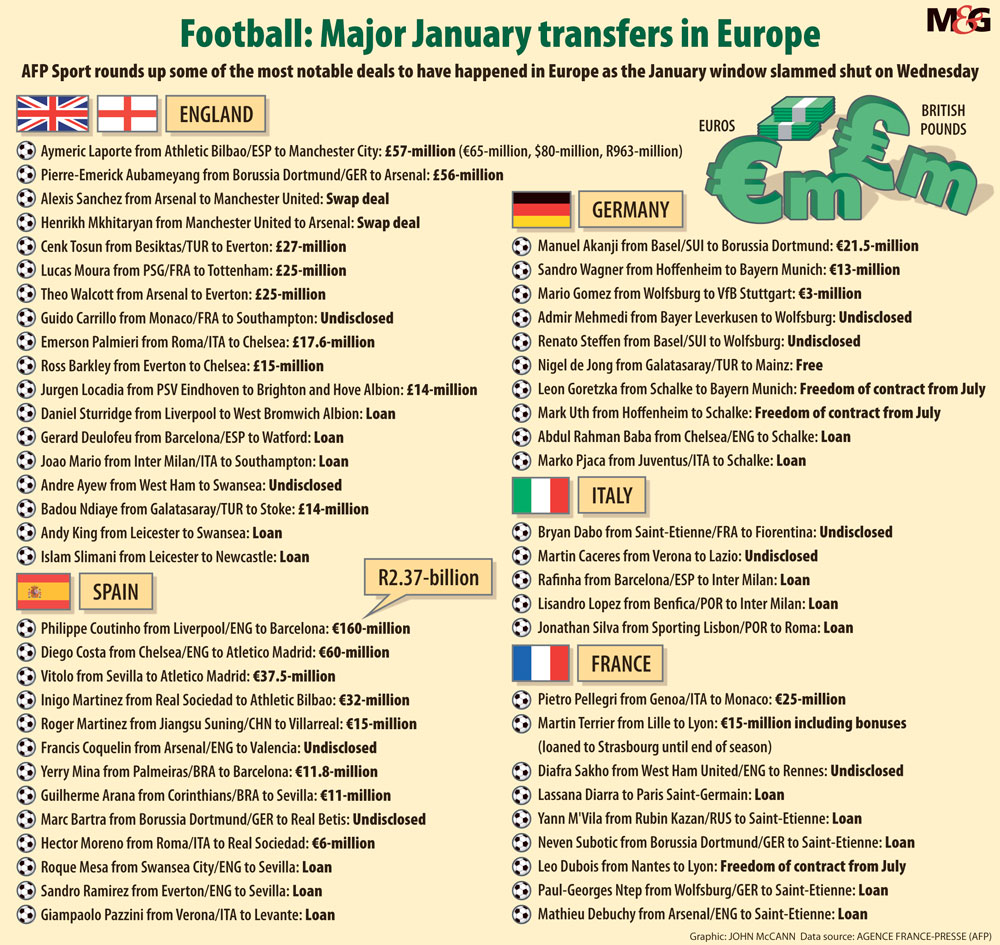 The prolific Aubameyang compared himself to club legend Thierry Henry, telling the Arsenal Player website he was attracted by the “big history” of the club, who lost ground in the Premier League with a 3-1 defeat by Swansea on Tuesday.

The Gabon international will be reunited at the Emirates Stadium with former Dortmund teammate Mkhitaryan — a tweet on Arsenal’s Twitter account pictured the two players together with the message: “Friends reunited”.

Aubameyang posted a message on Instagram apologising for the circumstances surrounding his departure from Germany, but describing himself as “crazy”.

“Perhaps it was not the best way for me to have decided, but everyone knows that Auba is crazy,” Aubameyang said.

“I never had any bad intentions. I will never forget these four-and-a-half years at Borussia Dortmund.”

Chelsea later announced the arrival of Arsenal striker Giroud on an 18-month contract for about £18‑million and Michy Batshuayi’s departure for Borussia Dortmund in a loan deal until the end of the season.

Frenchman Giroud (31), who has struggled to hold down a regular starting spot since joining Arsenal in 2012, said he was delighted to be joining their London rivals.

Belgian forward Batshuayi (24) arrives in Dortmund as a direct replacement for Aubameyang, to complete the three-way puzzle.

Brazil winger Moura challenged his new Spurs teammates to win the Champions League after arriving from PSG for a reported £25‑million.

Manchester City may have got nowhere with their interest in Mahrez, but the Premier League leaders paid a club-record fee of £57‑million for young French centre-back Aymeric Laporte from Athletic Bilbao, in a deal confirmed on Tuesday.

Swansea, battling for Premier League survival, brought Ghanaian forward Andre Ayew back to Wales from West Ham on Wednesday — 18 months after he joined the Hammers for £20.5‑million.

The Swans said they had re-signed the 28-year-old for a club record, but undisclosed, fee on a three-and-a-half-year contract that will reunite Ayew with his brother Jordan at the Liberty Stadium.

Newcastle, just a point above the bottom three, sealed a season-long loan move for Islam Slimani, the Leicester striker.

Slimani has struggled to live up to his £30‑million price tag as Leicester’s most expensive signing, with 13 goals in 46 appearances since his arrival in 2016.

But Newcastle manager Rafael Benitez, speaking after his side’s 1-1 draw with Burnley on Wednesday, said: “He is a player who can fight with defenders, challenge and score goals.”

Everton, who saw Theo Walcott, a £20‑million window signing from Arsenal, score twice in a 2-1 win over Leicester on Wednesday, also made a loan signing of Manchester City defender Eliaquim Mangala, now surplus to requirements at the Etihad Stadium after Laporte’s arrival, subject to Premier League clearance.

Earlier in the window, Everton’s local rivals Liverpool signed Virgil van Dijk from Southampton for £75‑million — a world record for a defender.

German World Cup winner Mesut Ozil gave Arsenal a big boost by finally agreeing a new contract that will see him become the highest-paid player in the club’s history, according to the BBC, which said he would earn about £350 000 a week.

There was no official confirmation from Arsenal but Ozil posted a tweet with a picture of him signing photos with the message: “Had a busy day signing things.” — AFP