A grim anniversary: Hundreds of clinics close as Trump’s gag rule turns one 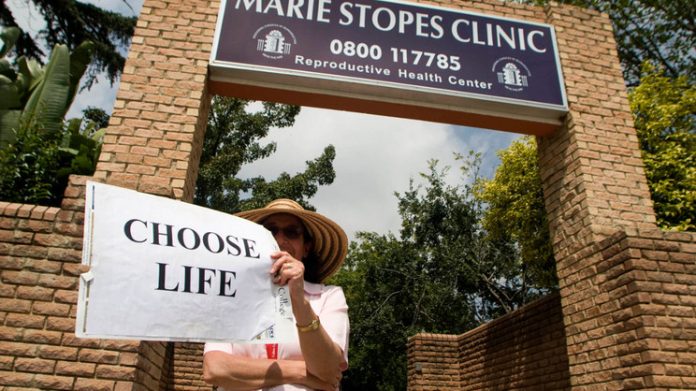 Future Gwena dangled a condom in one hand and pinched a tiny, T-shaped intrauterine contraceptive device (IUD) in the other. About 25 women stared back at her silently.

The only sound at the gathering in kwaMutoko — a small town in the east of Zimbabwe’s Mashonaland province — was the cooing of a baby and the far-off wail of a dog. Someone cleared their throat nervously next to the small Mushimbo Clinic at the end of a dirty road sloppy with mud and rocks.

Then, suddenly, the floodgates opened.

“Will sex hurt with an IUD?”, one woman wanted to know.

“Can those little wires at the end poke at a penis?’ asked another.

A third chimed in: “We don’t want anything that will make sex less good, you know?”

Tens of thousands of women condemned to illegal abortionists
It was April 2017, and at that same moment, a near identical scene was playing itself out at eight other sites in rural Zimbabwe.

By the end of the day, Future and her counterparts from Population Services Zimbabwe (PSZ), a branch of the international family-planning organisation Marie Stopes International, had doled out long and short-term birth control to about 350 women. Over the previous four years, they had reached just under half a million women, the organisation’s figures show.

Most of that outreach looked a lot like this one — an intimate, and at times raunchy, chat between women. It just so happened that one of those women had rolled into town with a bakkie full of birth control and a team of nurses ready to inject, insert, and pass it out.

Future’s mobile outreach clinic was funded by the US government through USAID, the country’s government agency that “works to end extreme global poverty and enable resilient, democratic societies to realise their potential”, according to the agency’s website.

But about a year ago, in January 2017, things drastically changed for such projects.

US President Donald Trump announced that he was cutting all American aid money to organisations that “perform [or] actively promote abortion as a method of family planning”.

To be clear, Trump wasn’t talking about stopping American dollars from actually funding termination procedures. By law, federal money in the US can’t be spent on abortions — either at home or overseas. But by reinstating the so-called “Mexico City Policy”, or “global gag rule” as it’s known to critics, Trump was talking about axing US grants for other services — like PSZ’s mobile birth control clinics — and to organisations that were, in almost any way, “pro-abortion”. The ban also prohibits groups from dispensing any funding, even from other donors, to organisations promoting or performing abortions.

For a few months, many of Zimbabwean Planned Parenthood and Marie Stopes branches clung to their last American dollars. But by September — the end of the USAID funding year — they were all gone.

Watch: How people are fighting back against the gag rule

The first hints of what Trump’s executive order means for the world’s most vulnerable women are now emerging – almost exactly a year after the US president signed it.

In Zimbabwe, for instance, PSZ was providing more than half of the long-term contraceptives available in the public sector at the time of Trump’s announcement. Its teams visited about 1200 rural locations regularly to hand out birth control, most of them places like Mushimbo Clinic in kwaMutoko.

But when the last of the USAID funding went dry in September, PSZ quietly closed 600 of its 1 200 rural outreach sites. By the end of Trump’s first term in 2020, Marie Stopes International estimates that the cut in services will result in an additional 110 000 unintended pregnancies and 32 000 unsafe abortions in Zimbabwe.

“For us, this is not something theoretical anymore — the impact of this policy [for Zimbabwean women] has already begun,” Abebe Shibru, PSZ’s country director says.

In the east of Africa, in Kenya, Family Health Options — the local affiliate of Planned Parenthood and the country’s oldest family planning clinic — is at similar cliff’s edge. It has cut outreach programmes that were reaching about 76,000 women every year and closed its clinic in the coastal city of Mombasa.

“These women put their trust in us, and now we are leaving them stranded,” says Amos Simpano, the group’s clinical director. “We have no idea where they’re going to go for these services.”

Echoes of PSZ and Family Health Options’ crises are being felt all over Africa, from Uganda to Madagascar to Burkina Faso.

In South Africa, nonprofits have been reluctant to speak publicly about the ban’s effects. But Bhekisisa understands that the rule has already stopped some NGOs from providing abortion information and has created divisions in civil society.

Some healthcare workers, who wished to remain anonymous, told Bhekisisa in November that the policy has prompted fear and anxiety not only for organisations’ survival but also about the implications for their patients.

Internationally, however, activists say a clause in the policy allows some organisations, such as those in South Africa, hope of respite — although it still does not allow them to provide abortions.

The document outlining the new US funding guidelines states that when local laws require health workers to provide counselling and referrals for abortions, they may continue to do so without violating the policy.

“This means that the gag rule falls away, as healthcare workers in South Africa are obligated to counsel and refer women under domestic laws, ethics guidelines and the Constitution,” says Brian Honermann, deputy director of public policy for the Foundation for Aids Research (Amfar).

“[The gag rule] cannot contravene the law of a sovereign state,” he argues.

But Honermann says that this still leaves local organisations in a difficult position.

South Africa is one of only five African countries with liberal abortion laws, according to the Guttmacher Institute, a nonprofit public health research organisation.

Honermann warns that there is nothing to stop the US pulling future funding from organisations and government who exercise their rights under the gag rule.

If local organisations are confused as to what they can and can’t do under the policy, they are not the only ones. Many US government agencies who are supposed to impose the gag rule are equally perplexed, a US State Department report revealed last week.

The controversial report also cautions that because so many NGOs remain confused as to what the ban means for them, they risk accidentally falling foul of the policy. It recommends that the US government soften its position, which requires it to immediately suspend funding to violators of the ban, and instead allow US agencies to use their discretion for first-time offenders. The review did not examine the policy’s impact on women, leading one US politician, congresswoman and Democrat Nita Lowey, to call the report “useless” and “superficial” in a statement.

The US State Department has recommended another assessment of the policy be carried out by December. 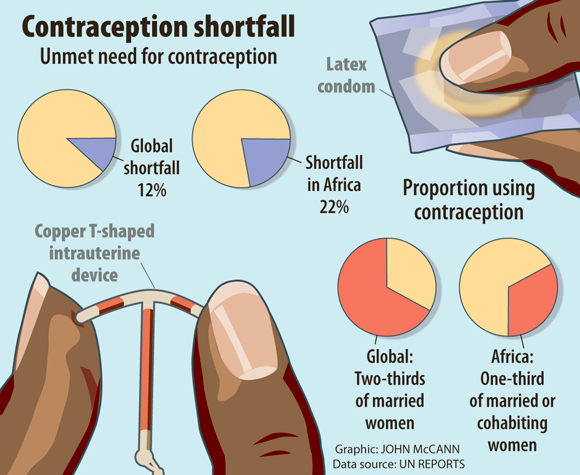 A widening gap: Funding for reproductive health was already lagging before Trump’s imposition of the gag rule. The US has not yet reviewed what the policy has meant to the lives of people on the ground in the countries it aids.

Globally, however, the policy’s effects are still building. In the last year, many women were spared the earliest effects of the funding cuts by a worldwide wave of righteous indignation — and the righteous check-writing that followed close behind.

In February 2017, Lilianne Ploumen, the Dutch minister of foreign trade and development cooperation, announced that she was forming an international nongovernmental organisation called She Decides to raise money for groups affected by Trump’s policy.

“I was very disappointed and a little bit shocked [to hear about Trump’s policy] because, you know, this is 2017,” she said in an interview with the New York Times at the time. “You would have expected that in 2017 the rights of women and girls to be the masters of their own bodies and their own sexual lives would be something matter-of-fact.”

The Dutch government, she pledged, would kick in the first 10-million Euros (R150 million).

By January of this year, the group had raised just over 390-million Euros (R5.75-billion) to bridge the gap in international sexual and reproductive health funding left by Trump’s decision.

In Madagascar, where nearly all of Marie Stopes’ outreach efforts were US-funded, an anonymous American donor kicked in $1-million (R12.1-million) of his own cash to purchase a new fleet of vehicles after USAID took back all of its cars.

“He asked where we could use his money that would make the most significant impact, and told us to send it there,” explains Marjorie Newman-Williams, Marie Stopes International’s vice-president and director of external affairs.

Even outside the uber-wealthy, she says, the organisation “saw quite a notable spike in individual donations this year. It’s clear to me that when people understand what’s happening here, they’re moved to give.”

The problem, she says, is that US funding was always a solid, long-term prospect. Under the Obama administration, it came like clockwork year after year, allowing Marie Stopes International to grow from a relatively small family planning NGO into one of the world’s largest in less than a decade.

And while well-intentioned, none of the donors who have stepped into the void Trump created have deep enough pockets to make the kinds of promises the US once did.

In many cases, American funding helped give countries crucial momentum in their efforts to expand contraceptive access.

In West Africa in particular, Newman-Williams says, several countries recorded record-breaking progress in the past decade. In Burkina Faso, for instance, thanks to fierce government advocacy and international donor support, the number of women who wanted to prevent pregnancy but didn’t have access to birth control fell from two-thirds in 2011 to 24% in 2016, according to 2011 Guttmacher data and 2016 figures from health research body, Performance Monitoring and Accountability 2020.

But in 2017, Marie Stopes in Burkina Faso lost about a quarter of its funding, which had come from the American government. In response, it cut three of its nine outreach teams and ended financial support to 80 government clinics.

For Newman-Williams, those kinds of cuts could open a dangerous gap in services at a critical moment.

She warns: “To nip the progress of a country that has come so far like Burkina Faso in the bud right now would really be tragic.”