A comrade rises – before the fall

There was a time long ago, and not so long ago, when Jacob Gedleyihlekisa Zuma represented the potential the liberation of an oppressed people held. It was 1990 and a country teasing with the idea of that freedom was emerging. It was a time when the man ‘from the intestines of Zululand’ represented more than himself. Here is Zuma, in his own words, as recorded by The Weekly Mail, the forerunner of the Mail & Guardian

‘They’re here! ANC team jets in”, the headline on the front page of the March  23 1990 edition announced.

Zuma would be the first ANC national executive committee (NEC) member to enter South Africa through the front door, landing at Jan Smuts Airport (now OR Tambo International) on March 21 1990.

“ANC intelligence chief Jacob Zuma slipped quietly into the country on Wednesday aboard an SAA flight from Lusaka.”

Though an agreement on negotiations had been reached with the National Party government, such was the brutality of the apartheid regime that trust was wafer thin.

Zuma’s presence would be to test the waters, before the arrival of more high-profile and government-reviled members of the liberation movement, such as Chris Hani. The fear for Zuma’s safety ran high in the ANC, which was at pains to counter news of his presence. “We cannot say, at this stage, whether it is true or false,” then head of the internal leadership committee Ahmed Kathrada told The Weekly Mail’s Thandeka Gqubule. “Zuma, the man who was here, but wasn’t”, ran the headline.

With the State of Emergency still in force, political prisoners in jail and trials still in play, the violence in Natal at its zenith, and the ground rules for the discussions with the regime to be concluded, everything was at stake.

In possibly his first interview after returning, The Weekly Mail’s Gaye Davis spoke to Zuma, who recounted being born in “the intestines of Zululand”, the forests of Nkandla.

With his father, Nobhekisisa, dead and his mother, Geinamazwi, working in Cato Manor as a domestic worker, “Zuma remembers trying to visit at her work, ‘the dogs barking, the madam not wanting anyone to come near the house’.”

At the age of 15, Zuma was doing odd jobs to help supplement his mother’s income. “My mother very much wanted to educate me and I very much wanted to be educated, but somehow it just couldn’t happen. I realised the hardships of life at a very early age. I didn’t have what other children had. I realised my mother was suffering.”

It was through ANC members and his elder brother, Muntukubongwa, a World War II veteran, trade unionist and ANC member, that the younger Zuma became politically aware: “The suffering was not just with me but with the black man in the country.”

In 1959, Zuma joined the ANC. “That’s when I got a systematic political education. [It] concretised things for me.”

Three years later he would join Umkhonto weSizwe. “I remember my mother getting very worried. ‘My son, these things belong to the big people the Luthulis and the Mandelas.’ But I felt I just couldn’t fail to be in the thick of things. My view was that to correct the wrongs and participate in liberating South Africa, I would be working for all the oppressed, not just myself or my family.” 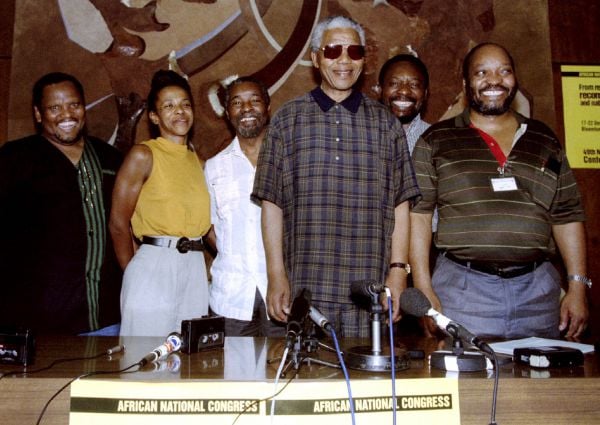 [The Weekly Mail reported on his, and other ANC leaders, return and on the beginning of his rise to become the president. (Robben Island/Mayibuye Archives)]

Zuma’s ambition to join the armed struggle in exile was initially thwarted when he was arrested while making his way out of the country. He was convicted of conspiring to overthrow the government and sentenced to 10 years on Robben Island.

“We had to deal with warders who were thoroughly briefed on how to ill-treat us. It was tough  but we soldiered through.”

For the duration of his stay on Robben Island, Zuma would not receive a single visitor. The next time he would see his mother would be two weeks before his release.

After that, he continued to mobilise the internal resistance from Durban, eventually skipping the country following the arrest of his close comrade, Harry Gwala. “I was told later the security branch were very angry they couldn’t get me. They just missed me by inches.”

In exile, first in Swaziland and later in Mozambique, Zuma rose through the ranks, joining the NEC in 1978.

He would appear prominently on the pages of The Weekly Mail again, in the November 23 to 29 1990 edition, with reports on the ANC’s Southern Natal regional conference.

Here a no-holds-barred criticism of the regional flaws of the Mass Democratic Movement was read out. Robben Islander and organiser for the National Association of Democratic Lawyers Natal, Jeff Radebe, would read out the document smuggled from the island: “The issuing of political decrees without proper discussion and broad consultation with the people has done more harm than good. The consequences of leading by political decree and pamphlets resulted in the use of coercion and threats, especially by the youth, to force the people into political campaigns. This tended to alienate various sections of the oppressed and also provided fertile ground for the enemy and criminal elements to manipulate the situation in their favour.”

The document also laments the absence of African, locally based leadership, something that had become a focal point for Mangosuthu Buthelezi, who attacked the ANC as “non-African, anti-Zulu, Indian controlled and Xhosa led”.

When asked why the document was read in a public session of the meeting, Southern Natal executive member Nkosazana Zuma is quoted as saying this was “one of the strengths” of the ANC “that it is able to look at itself and point out its mistakes and try to correct them, rather than pretending they do not exist”.

After his return from exile, Zuma had spent much of his time trying to broker peace in the strife-torn province. Bolstered by the analysis of the Robben Islanders, and preceded by a period of intense lobbying, he would stand for the position of first Southern Natal regional chairperson unopposed.

In the process, he would depose Mosiuoa “Terror” Lekota. Other members replaced after the conference included Jabu Sithole and Pravin Gordhan. Joining Zuma as his deputy would be the narrator of the island document, Radebe.

“I should spend a little bit more time here than before,” Zuma told The Weekly Mail.

Four years later and Zuma’s star was shining brightly. The Weekly Mail tipped him as a shoo-in for the position of Natal/kwaZulu premier. Greeting dignitaries at a Jesus Peace Rally, Zuma used his now trademark show of effusive warmth to move seamlessly between a National Party Natal leader and Inkatha’s Chief Buthelezi.

“Zuma has the confidence of a man who believes history is on his side. His conviction that he is on a winning wicket flows less from the Marxist theory he learnt from Harry Gwala on Robben Island than the progression of his own life,” The Weekly Mail’s Stephen Laufer wrote, with reference to Zuma’s poverty-stricken formative years.

Although only agreeing to participate in the elections nine days before the vote, Inkatha would triumph.

At the Jesus event, well before Zuma or anyone would guess at his route to the deputy presidency and ultimately to the presidency, Zuma was already eyeing retirement.

“I would like to retire from active politics at the next election [1999]. I’ll be 57. A cottage by the sea, with the waves lapping, would be wonderful. I love the sea.” — Compiled by Beauregard Tromp