The financial sector has come under fire again for its slow pace of transformation, with the Association of Black Securities and Investment Professionals (Absip) saying it wants the sector to be more reflective of South Africa’s demographics.

“Asijiki … as Absip we will not turn back on our belief that the financial services sector should be radically transformed to become a vibrant, globally competitive industry,” said the president of the association, Sibongiseni Mbatha.

Absip has turned its focus to the youth, women, advocacy, thought leadership and financial sustainability to further promote transformation.

A survey by 27four Investment Managers, which measures transformation in the financial sector, says that, of the R4.6-trillion industry assets, only R415.5-billion — or 9% — is managed by black firms.

Women make up a mere 45% of 586 employees employed in the industry, according to the survey.

Absip notes that, in the 2017 Financial Mail ranking, of the 465 stockbroker analysts who participated in the survey, only 18% were women and 14% were black.

Business Leadership South Africa (BLSA) has supported the call for more transformation of the sector, saying it resonates with its strategy, which includes inclusive socioeconomic growth, gender equity and equality.

“We know that when women are included in the economy to the extent of about 10 percentage points, the gross domestic product of a country goes up by two percentage points,” BLSA chief executive Bonang Mohale said. “Of the 56-million South Africans, 60% are 35 years or younger,” he said, illustrating the need to invest in the youth.

Mbatha highlighted the slow pace at which the sector was transforming.

In 2016, the Black Management Forum called for tougher measures, such as fines and penalties, for companies that continue to fail to comply with the Employment Equity Act.

In the same year, a Commission of Employment Equity report revealed that, of the top management of corporate South Africa, only 14.3% were black Africans and 68.9% were white people, compared with the economically active population of 77.4% black people and 9.9% white people.

Parliament’s finance and trade and industry committees held joint public hearings on transformation of the financial sector last year but the outcome reflected little progress in transformation, especially in terms of ownership.

The committees proposed that, by 2019, state assets managed by fund management companies must be at least 51% black-owned or have a level four broad-based black economic empowerment status. There are eight compliancy levels within the codes, and a ninth, which is non-compliant. Level one is the most compliant; level eight, the least.

Absip recommends a more stringent level two as the minimum. It believes that, if assets are managed by transformed asset managers, this will accelerate transformation in the stockbroking sector, where a mere 2% of trade commissions are attributable to black stockbrokers.

The committee also suggested that there should be an audit of specialised professions, such as actuaries, auditors and hedge-fund managers, and measures should be put in place to align with the Financial Sector Charter code and encourage transformation and mentorship in the sector. 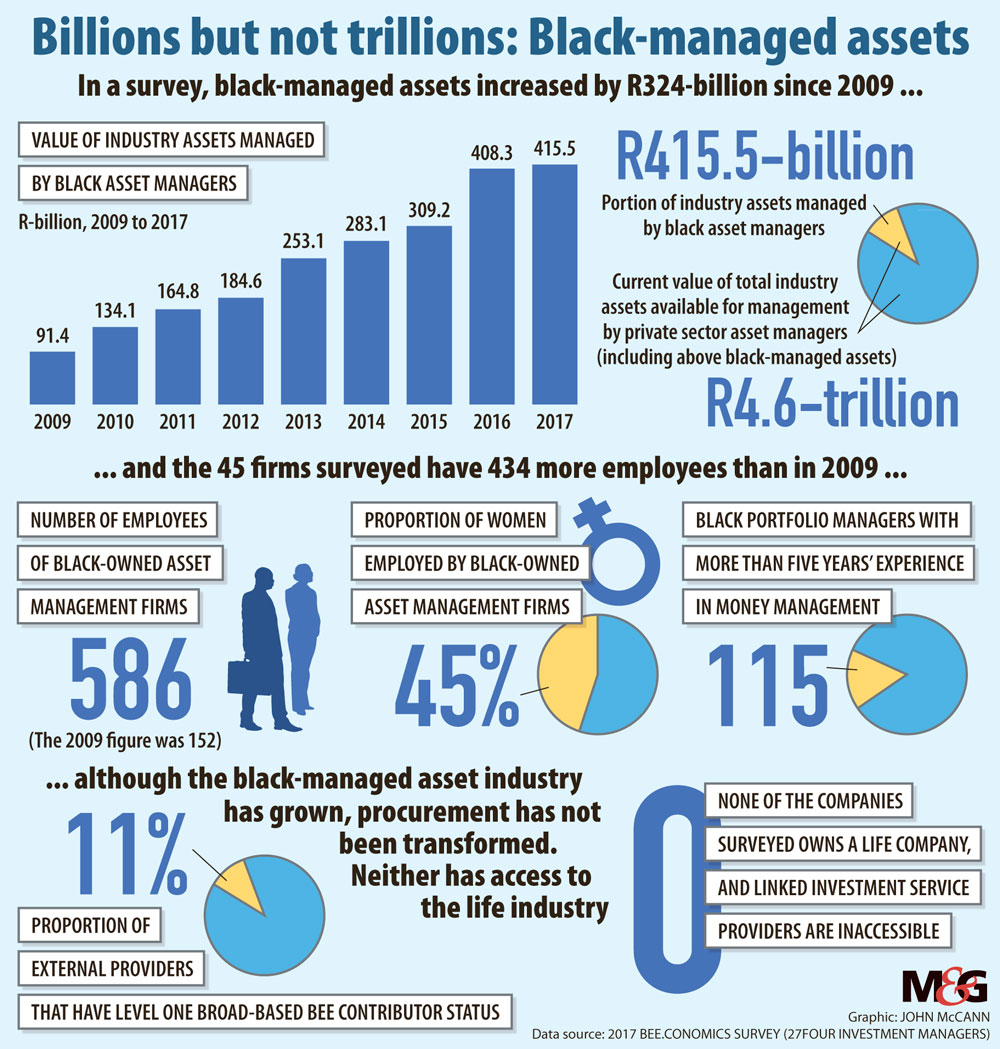 Another proposal was that the National Economic Development and Labour Council should pay more attention to skills development in the Financial Sector Charter to prioritise black people, particularly black Africans and women.

Additionally, the committee suggested that the nature of ownership in the sector should be reviewed, given the market concentration of the top five banks.

Absip has also made recommendations to amend the Financial Sector Bill, which is being  considered by Parliament. These include explicitly setting out the need for the Bill to encourage and cater for black-owned and black woman-owned entrants. This may include exemption from some stringent requirements until their businesses can compete with the incumbents.

But lobbying to change legislation and influence policy has not been the association’s only effort to normalise the sector. Absip has formed part of the R100-billion black business growth fund to support black and women-owned and managed businesses.

Speaking at Absip’s inaugural event on transformation in the sector on February 23, Mbatha said the financial sector could act as a catalyst to unlock the potential for economic growth and social development.

“The financial sector could do more to support enterprise development, especially small and medium-sized enterprises and black industrialists,” he said, endorsing the committee’s suggestion that procurement and enterprise and supplier development should be a key focus in transforming the sector.

The treasury, apart from allocating R2.1-billion in this year’s budget to fund small and medium-sized enterprises during start-up, the treasury also amended its preferential procurement regulations to favour transformation in designated groups, such as black women, youth enterprises, co-operatives and people with disabilities.